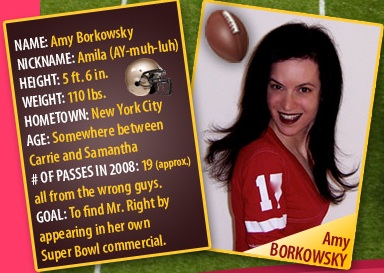 How can you exploit the Super Bowl without spending millions for a 30-second commercial?

1. Be an attractive woman
2. Talk about doing something crazy
3. Build a website

That’s what comedian Amy Borkowsky achieved with her highly publicized quest to find a husband. The never-married 40-something is trying to raise $3,000,000 to run a personal ad during the Super Bowl, and has put up a site, “Super Bowl Single Girl,” to help raise funds for the… um, worthy cause. So far, with just over 3 months till the Super Bowl, she’s raised about $2,000.

But in terms of massive publicity, she’s already earned millions of dollars in free hype. Score after the first week: Amy Borkowsky 1, Media Suckers (including me) 0.

Update 1/29/9: While Borkowsky didn’t even come close to raising the money needed for a Super Bowl ad, she scored something even better. No, not a husband. According to today’s L.A. Times, she’s getting her own reality show, “Amy Borkowsky Will Do Anything to Get a Husband.” And starring in your own reality show is the new American dream, right?