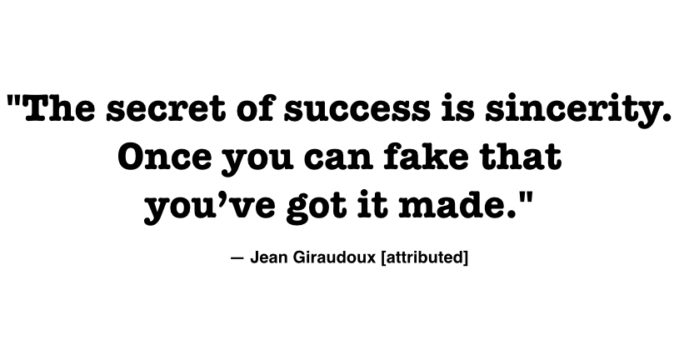 by Freddy Tran Nager, Founder of Atomic Tango + Guy Who Is Authentic When Necessary…

The movement du jour among marketers is “authenticity.” This approach dictates that companies should be open and honest about who they are and what they stand for — not just because that’s a good thing to do, but because that’s the only way to succeed.

Authenticity is based on the premise that today’s consumers are too savvy, too jaded, and too cynical to buy hype and commercialism anymore. Brands should be genuine, not contrived by ad agencies. They should be based on the true personalities and convictions of their founders and employees. And they should be rooted in the values of the communities they serve.

All nice thoughts, huh? Almost makes you want to break into a hand-holding version of “Kumbaya.” Unfortunately, it’s mostly fantasy and fairy tales.

Although I’m a self-avowed bleeding-heart tree-hugging cat-rescuing granola-crunching lefty, I’m also a realist about what it takes to succeed in a viciously competitive marketplace. So while I love the values that the authenticity movement embraces, it’s fundamentally based on a naive and idealistic impression of the consumer.

I recently read a tweet quoting some authenticity expert: “Authenticity is crucial to producing higher quality, more valuable content. Consumers can spot the garbage!” This got retweeted by other marketers although, ironically, that quote is pure garbage.

I’m a consumer. The people I love are consumers. Indeed, everyone I know is a consumer. I also teach consumer research and analysis. And let me tell you, most of us consumers not only can’t spot garbage, we lap it up. Examples:

So consumers can spot the garbage? Really?

It kills me when marketers sit together in ivory towers, sipping $4 decaf non-fat lattes, reinforcing each other’s high-minded theorems, and projecting their personal values onto “consumers,” when all they have to do to learn what consumers really want is to simply watch what they’re actually buying.

Oh, I forgot. People today get their news from social media. That explains everything.

“You can’t handle the truth!” — Jack Nicholson in “A Few Good Men”

In addition to a misconception of consumers, authenticity believes that the truth sells, when nothing could be further from the, well, truth. Indeed, telling the unfiltered truth can plunge an “authentic” company into hot water.

Take the example of John Mackey, CEO of Whole Foods. For years, Whole Foods has created a brand based on social and environmental consciousness — a true member of the community whose prices cost an arm and an organic leg because, well, good food harvested and traded conscientiously is worth it, right? That translated into a multi-billion-dollar business and a devoted base of mostly liberal yuppies. Then, lo, Mackey wrote an editorial in the Wall Street Journal in which he ripped apart Obama’s healthcare reforms.

Mackey’s article began with an inane Margaret Thatcher quote (“The problem with socialism is that eventually you run out of other people’s money”) then devolved into a rich man’s approach to health care, arguing for tax-deductible health savings accounts and (get this) making it “easier for individuals to make a voluntary, tax-deductible donation to help the millions of people who have no insurance.” Yes, Mackey’s a tax-phobic idiot who has no concept of what it’s like to be poor, what health procedures cost these days, or how little Americans actually donate to charities, even the ones they really care about.

But here’s the thing: Mackey was being himself and expressing his true beliefs. Isn’t that being “authentic”? He didn’t put up a false progressive “I love poor people so please tax me more” front; he spoke his genuine thoughts — thoughts that didn’t contradict his passion for organic arugula or fair trade coffee. The products at Whole Foods remain the same, and the employee benefits are still some of the best in the country. The only thing that’s changed is that many Whole Food customers finally learned that the guy running their favorite fruit stand harbors bonehead conservative views and has the gall to express them.

For that moment of authenticity, the entire Whole Foods corporation — including its workers, many of them liberals not living high on the free-range hog — was briefly boycotted by liberal customers. As Mackey discovered, authenticity can be hazardous to your fiscal health.

Those are all successful enterprises and individuals. None of them is definitively “authentic.”

More often than not, success goes to those who portray the right image — authentic or not — to their target market.

We all know this, even on a personal level. We’ve learned that there are thoughts we dare not utter, no matter how truthful, in a job interview, on a first date, to a police officer, even to our mates and our families. We’re warned to watch what we post on social media, no matter how accurately those words and photos reflect who we are, because they could damage our chances of getting into college, getting hired by a great company, or getting elected to political office. (I’m so doomed.)

We even have a term, “TMI” (“Too Much Information”), for a confession that’s too personal or detailed. “Be yourself!” say the platitudinous Polyannas, but make sure no one knows that you’re an atheist, that you smoke pot, that you have sexual fantasies about vegetables, that you listen to Air Supply, that you hate children, that you voted against gay marriage, that you “borrow” office supplies for your home, or that you think your boss looks and acts like a Wookie — and that you’d still like to do him.

So if you run a business, I do hope you’ll be open and honest about who you are and what you stand for. And I do encourage you to create a genuine brand based on your personality and convictions, and rooted in the values of the communities you serve. But do all that because they’re good things to do and they make you feel good, and not because some so-called marketing expert tells you that’s the secret to success.

To be successful, you have to be starkly realistic — and that doesn’t always mean being “authentic.”

Related Post: “Authentically” Wrong: More Abuse Of The A Word