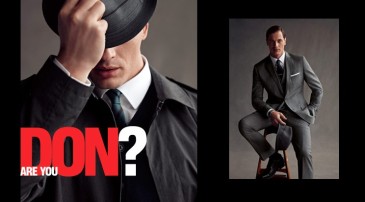 Don Draper would not be pleased.

Don’t get me wrong — basing a fashion line on the TV series Mad Men is brilliant (albeit, about three years overdue). Since I dig the show and midcentury-modern design, I looked forward to it, and a free cocktail launch party sounded like savvy marketing. Draper would have approved, but… 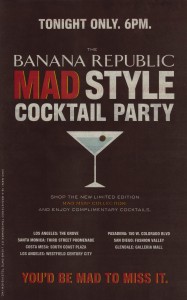 This past Thursday, fashion retailer Banana Republic ran an ad announcing a “Mad Style” Cocktail Party. So I decided to check out the event, expecting Mad Men décor, swinging sounds, the BR staff decked out in the outfits with period hairdos, and a tux-clad bartender shaking up ice-cold martinis. Maybe I’d add to my skinny-tie collection while there.

I entered the store, and the interior looked and sounded like Banana Republic as usual: very very quiet. Nothing distinctly 1960s about the place. I walked around seeking a dedicated room or section devoted to Mad Men, but found instead a small island with only a few articles of clothing and copies of the book The Fashion File by Mad Men costume designer Jamie Bryant, who also designed the BR line.

That was it. Woohoo, party.

As for the clothes themselves, they looked nice, but the collection over-emphasized sweaters. Sweaters? Maybe there are sweaters in the TV series (perhaps on old man Cooper), but I was anticipating slick suits and cool blazers, particularly anything from the wardrobe of character Pete Campbell (Don Draper’s the man, but Campbell sports the snazzier duds). One standard suit looked like something Draper would wear, but the entire display left me feeling uninspired and, oddly, a bit embarrassed.

And, apparently, so felt the handful of customers in the store, who didn’t exactly mob the display.

Now this was Century City, an intensely-corporate copse of highrises in the middle of L.A.’s Westside, filled to the sky with thousands of lawyers and Hollywood agents. You’d think they’d turn out for the Mad Men collection — or at least a free drink. I guess they didn’t get the memo.

Don Draper would be fuming.

Now, I’ll cut Banana Republic some slack. I did show up “fashionably late” (7 pm instead of the announced 6 pm). And because the Mad Men line is also “fashionably late” (2011 instead of 2008, when Mad Men-inspired fashions were gracing the pages of Esquire and GQ), perhaps BR didn’t want to overdo it. Maybe they spent all their money on just licensing the brand from Lion’s Gate, so they could only afford roasted potatoes with cream sauce. And maybe the other stores (such as the one near Lion’s Gate HQ) boasted more action.

Then again, this is a brand new clothing line supposedly inspired by an ad agency. And this is Banana Republic, which has a lot of money — and even greater needs.

Banana Republic has struggled to find a position (i.e., market niche) since they ditched safari wear decades ago for more mainstream attire. The brand is ostensibly for graduates of their sister store, The Gap, who crave more quality and sophistication. But too many BR clothes bear “Made In China” tags, which tend to say the opposite, and the styles look just like what’s hanging in a Macy’s — or even The Gap.

The Mad Men line could reposition the entire BR brand as one that’s Hollywood hip yet New York sophisticated, appealing to young professionals who realize there’s more to work wear than jeans and a graphic T. But if a company goes to all that trouble and expense to license and launch a new line based on a TV series, it needs to go all the way. Or, as Eating The Big Fish author Adam Morgan would say, it needs to over commit.

BR needed to blow the the cocktail party up into a movie premiere style event, with the show’s cast making in-store cameos (at least here in L.A.). BR needed to crank the music, bring out the cocktail shakers, and put the entire store and crew into character. Sure, all that would cost money, but so does surviving in a highly crowded and competitive fashion marketplace. Done right, it might have even generated some press coverage.

Instead, the Mad Men effort felt halfhearted, less Madison Avenue and more midtown mall. And as any true Mad Man could tell you, a diluted cocktail won’t generate much buzz.

P.S. I didn’t buy anything in the store, but when I got home and started conducting research for this article, I found a 25% off deal on the BR site. So I scored the Mad Men mac jacket for a discount the same day it was launched. I was happy, but somewhere, Don Draper is shaking his head and pouring another drink.