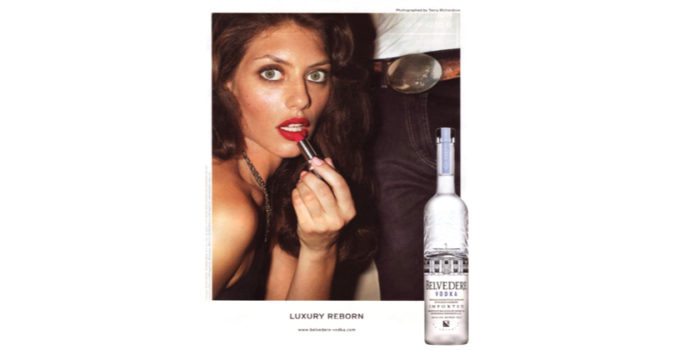 So I’m thumbing through my favorite geek magazine, Wired, when I’m suddenly confronted by this Belvedere Vodka ad that features a woman applying lipstick in the reflection of a belt buckle. (If any of my female readers have ever executed such a task, please let me know… What? None of you have? Gee, what a surprise!) Not exactly what I expected in Wired amidst ads for techie toys and the Discovery Channel. (Hey, have we got a discovery for you…)

I’m all for creative media placement, and I reckon VC-funded geeks drink expensive vodka and fantasize about women in awkward positions. But this also seems out of character for an upscale liquor brand. And I’m not sure how this image relates to the tagline “Luxury Reborn,” unless what constitutes “luxury” has taken one hell of a dive.

So as part of my civic duty as Blogger in Chief at Atomic Tango, I had to investigate. I type in the web address, which Belvedere smartly included for Wired’s web-addicted readership (not all advertisers seem to get this point).

I come upon the Belvedere site, which asks me to confirm that I am of “legal drinking age,” and like a savvy 13-year-old, I simply click “Yes.” (The absurdity of Web morality is enough to drive me to drink.)

I then hear a trippy trance riff as sung by some inebriated chanteuse. I’m also invited to click on “Discover Luxury Reborn” and am happy to see that Belvedere gets integrated marketing. No disconnect here. And what I see is a film trailer featuring misbehaving nouveau riche New Yorkers throwing air kisses and generally being uber-hipper than thou. Look, they’re vandalizing artwork! How edgy! How au courant! How Jack Nicholson in Batman 1989!

This trailer, I’m guessing, is for a forthcoming online Belvedere film, since there’s no explanation anywhere. As a producer of branded content, and a fan of BMW’s pioneering online films, I’m thrilled to see it. So I check out who’s starring in this one… Oh, of course: Vincent Gallo. 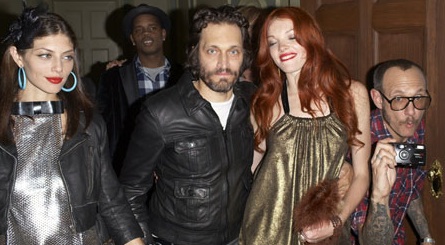 I sincerely loved Gallo’s film Buffalo ’66 which contains perhaps the most creative effort in cinematic history to get viewers to sympathize with a character. No petting the dog here, we follow Gallo as he’s released from prison and desperately tries to find a place to take a leak. It just gets funnier and more creative from there.

But Gallo is more infamous for other deeds. As the Trivia section of Gallo’s IMDB bio poetically puts it, “Known for his outspoken views and the outspoken way of speaking them out.” Gallo was also the writer-director of The Brown Bunny, in which actress Chloe Sevigny goes the next step beyond applying lipstick using a belt buckle.

The site also features interviews with other artsy New Yorkers talking about what it means to live downtown and be “underground” and “unpredictable.” Maybe Belvedere felt the need to wildly differentiate itself from all the other “preppie vodkas” flooding the market, and that they had to literally stoop to extremes to make this vodka appear edgy. I’m also thinking that Belvedere confused Wired with Conde-Nast’s other publications (Vogue, Vanity Fair, The New Yorker, etc.), or that Conde-Nast sold them a package deal.

Regardless of the reason, all of this should fly miles over the heads of Wired’s Silicon Valley readers (average age 37, 78% male), who define a “good time” as a video-game face-off with guys from other startups. It remains to be seen if this ad makes them buy expensive vodka — or just really shiny belt buckles.

Update 2 April 2012: Wow, just when you think Belvedere couldn’t get any lower, they run an ad that insinuates rape and uses a stolen image. (Out of respect for the actress whose photo was stolen, I refuse to show it here.) Completely classless. I had to wait till April 2 to confirm this, in case it was an April Fools joke. How could professional marketers be that clueless?