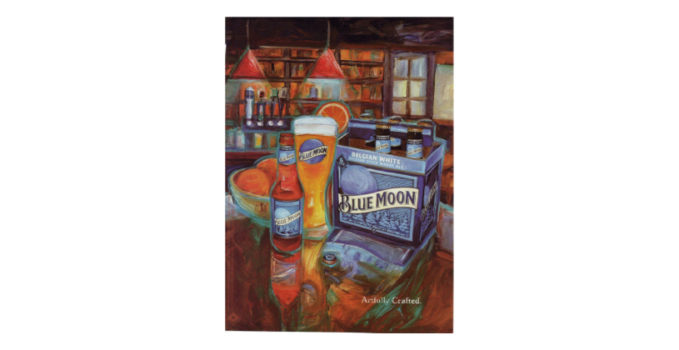 While thumbing through Wired magazine I come across an attractive painting of beer. What’s not to like? As a microbrew fan, I stop thumbing and say “talk to me!” But the only words in the ad are the name of the beer and the tagline “Artfully Crafted.” And the first thing that pops in my mind is not a desire to quaff the brew, but a distinct sense of disappointment. “What a waste!”

A full-page 4-color ad in Wired goes for about $70K — that’s an awful lot of beer to sell — yet the ad doesn’t include a web address for the intellectually thirsty. Hello, Blue Moon, this is a magazine read by tech freaks and geeks who are, well, wired. Listing your URL would not only be savvy, it’s mandatory. It would also help you track its effectiveness.

But don’t stop there.

If you’re going to drop $70K on an ad that targets such a well-defined readership, why not artfully craft a special offer for them? For example, anyone who visits your site could score free MP3’s of “Blue Moon tunes” by alternative and indie artists, which would bolster your “artfully crafted” credentials.

Out of curiosity, I Google “Blue Moon beer” and find their site, which is beautifully designed. Again, what a waste! They go to that much trouble and expense to artfully craft a website, then don’t bother to drive traffic to it. (Another waste is the fact that the site is entirely in Flash, including the blog, which is poor web strategy.) I’m beginning to feel sorry for this microbrewery, since I hope to overthrow the grip of giant American beer corporations and their anemic emissions. (The Brits like to say, “Why is American beer like having sex in a canoe? Because it’s f’ing close to water.”)

I then discover that Blue Moon is based in Golden, Colorado, which is home to the most heinous perpetrator of bad beer in the universe: Coors. (The rustwater dubbed “Coors Light” is no doubt the work of Satan.) A little more Googling reveals the fact that, yes, Blue Moon is owned by Coors, and that Coors is going out of the way to hide its association with Blue Moon, lest microbrew fans turn up their noses.

I then decide I can make fun of them in my blog. Indeed, it’s now my responsibility to trumpet this factoid:

Back to the ad: I assume that Coors wanted to pull an Absolut with a minimalist ad featuring artwork. Not a bad strategy (albeit a derivative one), but shouldn’t they at least have hired known artists or paid tribute to them? If “art” is the theme, how about promoting an online art show? Or inviting artists to submit their own Blue Moon-inspired art for exposure and prizes?

Altogether, it’s a disappointing watered-down effort by one of the nation’s largest advertisers. Hopefully, Coors/Blue Moon has invested more thought and effort in crafting their beer than they did in creating their ad campaign.