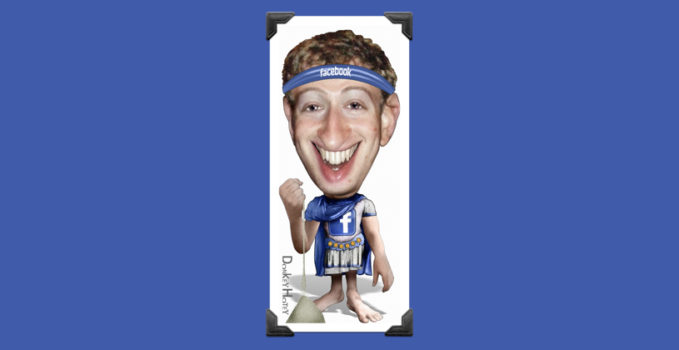 Once upon a time there lived an evil princeling named Zuckerella. Although he had more wealth than he could possibly ever spend, he craved much, much more. Specifically, Princeling Zuckerella wanted to be legendary – the brightest star of his very own fairy tale.

So the young princeling started writing out his fantastical story. He called it the Book O’ Faces, since it contained everyone he knew, plus lots and lots of people he didn’t really know, but whom he still called “friends.”

And the reason Princeling Zuckerella wanted all these friends in his Book is because a fairy tale must have balls, and he wanted nothing less than the biggest balls in all the land. So he invited everyone he knew, plus lots and lots of people he didn’t really know, to attend his balls.

The merchants rejoiced, and for many a moon, they invited everyone they knew, plus lots and lots of people they didn’t really know, to be part of their Pages. And to partake in the merchants’ offerings, all these people had to do was “like” their Pages. It was oddly narcissistic, but it seemed to work, and the “likes” poured in.

Then Princeling Zuckerella burst out laughing at the merchants’ pathetic attempts to gain admirers. “Is that all you got?” he chortled derisively. “I could get that many ‘likes’ in my sleep!”

So the merchants doubled and tripled and sextupled their efforts, throwing contests and giving away burritos and other prizes to get everyone they knew, plus lots and lots of people they didn’t really know, to “like” them. As they fought and struggled and hired dubious consultants to get more “likes,” they forgot about their true calling, which was to sell things. It was as if someone had cast a magic spell upon them, turning them into single-minded wandering sheep.

But Princeling Zuckerella had a more devious spell in mind. He waited until the merchants had attracted hundreds and thousands and even millions of people to “like” their Pages. Then he laughed and said, “Oh, you silly greedy merchants, you thought this party was free, didn’t you? Now let me ask you this: what good are all your admirers if you can’t talk to them?” And with a twirl, Princeling Zuckerella sprinkled cursed snake oil all over the Book O’ Faces, and suddenly, the Pages of the merchants went dark.

The merchants gasped, and some whined. When they first started their Pages, they could share their ideas and stories with all their admirers. Now they found that most of the people who “liked” them could no longer even hear them or see them. It was as if a great blindness, deafness, and dumbness (mostly dumbness) had fallen across the land. Soon only a handful of the most devoted admirers of each Page could see what the merchants wanted them to see. And while it was good for the merchants to know who loved them most, these passionate fans were too few to cover even the variable costs.

“Oh, Princeling Zuckerella,” wailed the merchants, “we put so much time and effort and money into making everyone we know, plus lots and lots of people we don’t really know, ‘like’ our Pages. Now they act as if we don’t even exist. What do we do?”

Zuckerella smiled so broadly it looked as if he could swallow the kingdom. “Two words,” he replied. “Pay me.”

A few merchants cried out, “Betrayal!” “The horror, the horror!” and “That’s a freakin’ bait and switch!” But Princeling Zuckerella only extended his palm. Chagrined, yet unable to admit defeat, many of the merchants reached deep into their pouches for coin, which they handed over to the Princeling. And they did this again and again, not necessarily to turn their admirers into customers, but simply to talk to them.

Of course, they could have done all this in the beginning with ye ol’ email, but hey, that’s another fairy tale.

And so Princeling Zuckerella’s wildest dreams came true. Not only did he have the biggest balls in all the land, they were very profitable ones. And in his Book O’ Faces, at least he lived happily ever after. What’s not to “like”?