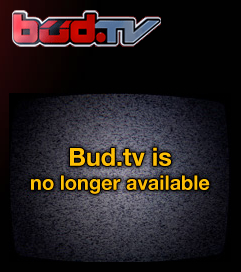 Bud: The King of Beers, The Jester of Advertising

As a Samuel Adams drinker and stockholder, I don’t partake in Budweiser’s anemic brew, but I’ve always loved their brilliant, often hilarious marketing. Until now…

Thanks to decades of massive unforgettable ad campaigns and ubiquitous distribution, “Bud” became synonymous with “beer.” Indiscriminate bar patrons now reflexively spew out “Give me a Bud” when asked what they want.

Budweiser even made themselves the most American of beers, so that it’s unpatriotic to drink anything else at a football tailgate party. And, yes, the Bud frogs were marketing to children, but we adults enjoyed them, too (awesome frog quote: “Never hire a ferret to do a weasel’s job”).

I could write a book on great Bud marketing, but they recently perpetrated two acts of bad marketing that made me lower my glass and raise my eyebrows…

The first was bud.TV (note: the URL is currently owned by a marijuana company, of course), which launched in 2007 to a lot of hype. It was a Bud-branded “TV channel” on the Web, promising comedy videos and mini-series for Bud’s primarily male fans. Bud spent over $30 million and collaborated with major ad agencies and Hollywood stars like Kevin Spacey and Matt Damon.

To access the site, consumers had to provide their driver’s license info to prove they’re at least 21. Since this meant bud.TV would be adults-only, I envisioned HBO-caliber edginess. I also envisioned the advent of a new era in entertainment, with giant brands launching their own TV channels featuring programming tailored to their customers. I envisioned Harley-Davidson TV and Starbucks TV and Nike TV. I envisioned the death-knell of the major TV networks and their bad reality shows and sixteen-million versions of CSI. I envisioned the YouTube-wannabes like Break and Revver finally differentiating their copycat sites in order to survive. I envisioned lots of creative opportunities for entertainment guys with marketing know-how like, ahem, me.

Instead, bud.TV gave us (drum-roll please) a male-makeover show called “What Girls Want.”

Seriously. Hello, is this Budweiser or the Style network? Isn’t the Bud brand supposed to be a celebration of the American male being himself, even if it means not shaving for three days and wearing a faded football jersey over torn jeans and yelling “Whasssuuuup” to his buds?

The rest of the programming included a stand-up comedy tour and a trailer for some sci-fi series that had nothing to do with beer. This was worse than the major networks. This was less edgy than YouTube. So I tuned out. And I was not alone. Budweiser had projected 2 to 3 million visitors per month, but traffic hit about 250,000 monthly and fell fast to almost nothing.

Granted, part of the problem was the laborious registration process required by law, which also prevented viewers from forwarding the videos to their friends, thus nipping any viral opportunity in the, uh, bud.

Then, sniffing a self-promotion opportunity, the attorneys general of dozens of states had a collective hissyfit over bud.TV’s supposed alcohol-themed entertainment, and they demanded an even more stringent admissions policy. (It’s a lot easier to pick on a major advertiser for morality violations than it is to prosecute actual criminals.) Obviously, these attorneys general were thinking more about their own PR opportunities than actually watching the bud.TV programming, which was less alcohol themed than Bud’s commercials — or even a rerun of Cheers! Interestingly, Budweiser didn’t exploit the controversy to attract more viewers.

Despite owning 48.8% of U.S. beer sales, with shipments up 2%, Bud’s parent company Anheuser-Busch has a wary eye on the craft beer segment (led by Sam Adams), which has grown 17%. So in addition to launching their own craft-like beers and investing in microbrewers like Red Hook, the folks at Bud are flexing their marketing muscles to keep their drinkers from straying from the herd.

Bud’s latest campaign claims that the clear light color of their lager is proof of its perfection, since you can “see” any flaws; conversely, darker lagers (like Sam Adams) can hide “flaws.” Now, it’s generally good strategy to use your competitors’ trademark characteristics against them. Sam Adams isn’t going to make their lager any lighter in color, so why not make that darkness a liability?

The problem is, true beer aficionados like myself will only roll our eyeballs at this spiel. After all, the whole point of craft brewing is careful attention to detail and flavor. And here in America, beer “flaws” aren’t something most drinkers worry about. No American brewer is going to use water pumped out of the back of a Chinese factory or a pond in Mexico City.

It’s also a specious line of reasoning. If clear is better, then white wine is superior to red wine, and Sprite is superior to Coke. Will some Americans buy it? Perhaps those who think that NASCAR is entertaining. In addition, the light-beats-dark B.S. will enable loyal Bud drinkers to argue why they’re not jumping on the craft-beer bandwagon. But to everyone else, it smacks of desperation and dishonesty. It also makes for REALLY BORING ADVERTISING, not keeping in line with Bud’s great tradition. My guess is that most consumers haven’t even heard of this campaign — it certainly won’t be popping up as a YouTube favorite anytime soon.

I like Bud, even though I don’t drink their beer. I love what they did for the advertising world and American pop culture, and for continuing to sponsor football broadcasts so I can feed my addiction. And their ubiquitous advertising also promotes the beer industry in general, so it’s helping my Sam Adams stock. I’m just disappointed in their latest moves, so I’ve got a small humble suggestion for all the marketing pros at Budweiser:

Bring back the frogs.