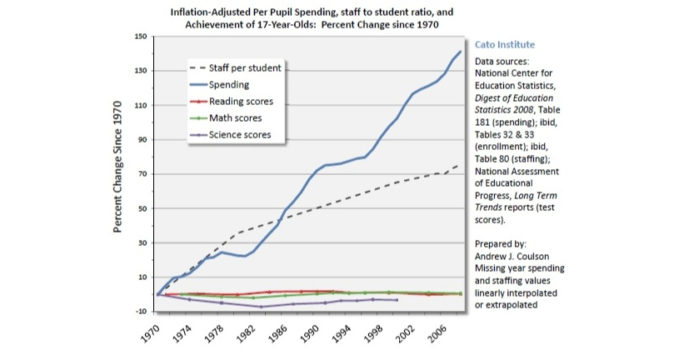 Showing But Not Telling: Why Charts Don’t Always Present The Complete Picture

by Freddy Tran Nager, Founder of Atomic Tango + Guy Who Loves To Question The Answers…

Sometimes you look at a chart and it seems clear as day. Then you look closer and that “day” turns into a foggy afternoon at San Francisco Airport with everything completely grounded.

For example, check out the above Cato Institute chart of school staffing, spending, and test scores in the U.S.

I received this from a Republican (yes, I really have Republican friends) who argued that, “While spending has increased 150% per pupil and staffing has increased over 70% since 1970, achievement (in the form of student test scores) has either stagnated or declined… This is why I contend that the nation does not need a federal Department of Education. In terms of increasing student achievement, it has been a failure.”

Looks pretty convincing, right? But for me this chart raised more questions than it did answers:

1. Do the test results reflect changes in family income? Lots of middle and upper class students have left the public school system in the past 40 years. The American middle class in general has shrunk. In addition, more than 40 years ago, many working class children didn’t even go to high school — they went straight into farming or factory work at age 16. Now the working class constitutes a majority of many public schools. Level test scores don’t look so bad in that light.

3. What was the money spent on? If a school already has nice facilities (like in the suburbs), any increase in spending can go to teaching and learning tools. For a school that started with inadequate facilities, increased spending often goes to just keeping pace with repairs, crowding, and security. Then there are the costs of those learning tools: Personal computers didn’t even exist in 1970, now they’re present in most schools. Meanwhile, the price of textbooks has far outpaced inflation.

4. Do the expenses include school construction? The past 40 years has seen a surge in new school construction, since 100-year-old buildings tend to fall apart. The problem is that land values and construction costs have skyrocketed since 1970, particularly in major metropolitan areas. There’s not exactly a lot of cheap empty space in major cities to just start building. If a 2-bedroom condo in L.A. costs $1 million, what does constructing a brand new school from scratch cost?

5. Is immigration considered here? The percentage of public school students for whom English is a second language has increased substantially since 1970. Poor immigrants usually don’t go to private schools. Indeed, considering the number of languages spoken in today’s urban public schools, it’s amazing that reading-test scores have even been flat. ESL also costs extra. Would reading-test scores have plummeted had expenditures and staffing not increased?

6. Weren’t teacher salaries extremely low to begin with? Although salaries have increased, have they kept pace with salary increases in other industries and with the cost of living, particularly in major cities? What do public schools have to spend to attract good teachers in the 21st century? Some regions of the country (Santa Barbara, California, for example) have had to subsidize housing for public employees. Is that included in the expenses?

7. Did the researchers always measure inner city and poor rural students as comprehensively as they do now? The U.S. Census didn’t.

8. Have the tests — and how they’re graded changed — over the course of 40 years? Since I work in education, I’m guessing, oh yeah.

9. Could there have been a deleterious effect on student ability to learn thanks to increased television, video games, parental drug abuse, poor childhood nutrition, and other social factors? With both parents now working in most households, particularly in the working class, public schools have been asked to do a lot more child raising, from discipline to providing proper meals to simply transporting the kids to campus. You must also factor in the number of public school students raised in single parent households, which has also increased.

That’s just a quick brainstorm of mitigating factors. There could be many more, such as the burden placed on public schools for special education.

In sum, simple charts can look impressive, but they don’t necessarily prove anything — particularly since a 2-dimensional graphic can only show a few elements. Pictures can be helpful, but they’re not always worth 1,000 words.