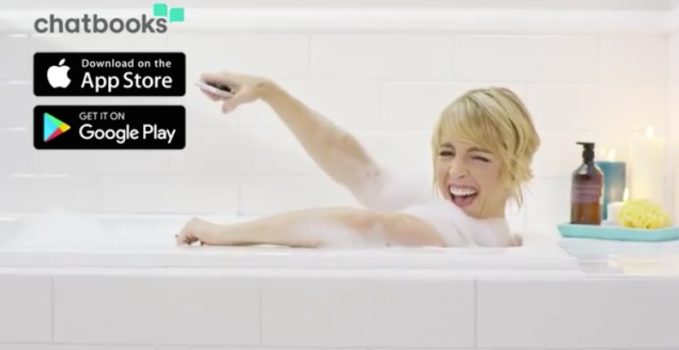 A Video So Funny It Almost Makes You Want To Have Kids: The Chatbooks Spot

by Freddy Tran Nager, Founder of Atomic Tango + Guy Who Loves Kids As Long As They Belong To Other People…

I’m not a mom (at least not the last time I checked). I don’t have a horde of kids running around the house (unless you count my cats). And I don’t scrap book (scrap box, yes — because what better place for photos and other mementos than a cardboard box?).

But I love this vid for startup Chatbooks. I’ve enjoyed repeat viewings. In fact, I want a sequel — no, make that a series. I would binge watch “The Adventures of Chatbooks Mom” starring comedian Lisa Valentine Clark on Netflix. Behold:

If there were acting awards for commercials, this would get “best ensemble.” (The kids are as spot-on as Clark.)

In terms of marketing, the video also nails the pain points that afflict harried moms and provides a simple solution. It also contains call-to-action buttons that work on YouTube to provide direct response. And above all, this video created by the Harmon Brothers builds a fun brand with a face (all brands should have a representative face). Such a strategy worked spectacularly well for another startup, Dollar Shave Club, to the tune of $1 billon.

Just as the Internet has helped usher in a golden age of television, it’s also brought commercial copywriting to new heights. The best ads no longer appear during the Super Bowl — they’re on YouTube.

And this ad makes me almost want to have lots of kids. Well, no, not really. But maybe I can Chatbook my cats…