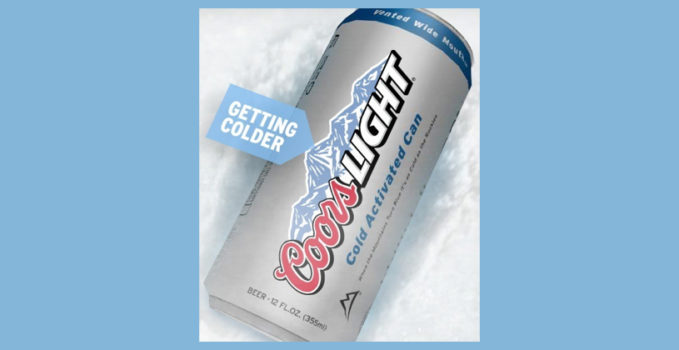 In The Can: Coors Campaign Leaves Us Cold

by Freddy Tran Nager, Founder of Atomic Tango + Guy Who Appreciates A Nice Cold One…

It’s no fun picking on Coors now that they’re no longer run by right-wing zealots from a mountain stronghold in Colorado. I did razz ’em for their faux microbrew, Blue Moon. But since Coors became the Molson Coors company, they’re part-Canadian, and Canadians are our lovable liberal neighbors to the north with free healthcare, right? To further confuse matters, Molson Coors joined with SABMiller, the South African owner of Miller Beer, to form MillerCoors to promote their products in the U.S.

So how can I pick on Coors now? It’s too easy…

My latest bouef du jour is Coors Light’s multimillion dollar campaign for their “Cold Activated Can,” which uses “thermal-chromic” ink to tell you when your beer is cold enough to drink. True, it’s cool (literally) to watch the mountains turn from white to blue, but as one of my buddies asked me, can’t you just touch the can?

Just touch the can. No, really, you’re allowed to do that.

Well, when a company can’t say anything good about their actual product, they talk about their packaging. Coors Light — in my never humble opinion — tastes like rusty tap water, but not as delicious. Indeed, you’ll never see Coors Light advertised on the basis of taste. Rather, you’ll see it hyped for its low caloric content and, now, temperature. Yes, you can make this beer turn cold by refrigerating it, putting it on ice, or having Ann Coulter hold it.

There’s another problem with this whole campaign: it makes for bad drinking. I found this little nugget on beer marketing in Wired:

“The mountains on a Coors Light can are poor arbiters of taste. The peaks turn blue at ‘optimal drinking temperature,’ or 39°F and colder. But beer loses flavor at that temp: It releases fewer volatile chemicals, and your tongue’s ability to taste bitterness is diminished. Luckily, with Coors that makes little difference.”

See, I’m not the only geek with an anti-Coors ‘tude. The alpha geeks just wield wicked terminology like “volatile chemicals.”

Now, Coors Light used to talk about its beer — sort of — with their slogan, “The Silver Bullet Won’t Slow You Down.” But that never made sense, either. After all, Coors Light is still technically a beer, and beer contains alcohol and, well, alcohol does slow you down, particularly when you’re thrown by the mechanical bull into the foosball table.

Yet, somehow, Coors Light is still the #3 selling beer in America. I guess for some good ol’ boys, hanging out and watching beer cans change color makes for a full evening…