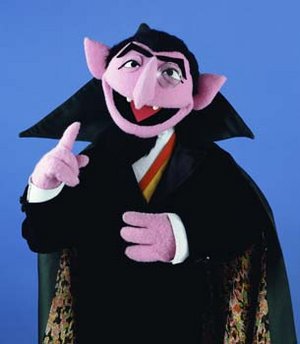 Over my fifteen years of working in website development, I’ve encountered some bizarre and fascinating characters rivaled only by the people who gravitate to show business. Here are just a few I’ve met — perhaps you recognize some of them?…

The Count: A part-time children’s television star, the Count began the practice of numbering everything down to multiple decimal points, such as “Version 3.1.2.4.” He even started numbering things before they needed numbering. Case in point: After coining the term “Web 2.0” (which he prefers to shout as “WEB TWO!” in a Transylvanian accent), the Count also coined Web 3.0, Web 4.0 and Web 5.1.8.3.

Michael K. Cera-Cera: Michael was a professional building contractor who lost his license when he failed to complete any project he ever started. He then moved into Web programming and development, where he carried over the contractor tradition of never actually finishing. This eventually evolved into the concept of “perpetual beta,” which Michael is still working on.

“Flash” Jordan: This former basketball star saw his high-flying career end when he bit off his tongue while executing a 360 double reverse triple salchow slam dunk. No longer able to express himself in words or hoops, Flash went to work for a fast-food chain, but his innate urge to needlessly stylize compelled him to spell words on hamburger buns by selectively removing sesame seeds. Fated to work in isolation, the frustrated artist finally became a graphic designer specializing in the programming language Flash, from which he took his nickname. Flash then proceeded to win every known web design award for ten straight years; unfortunately, none of the sites he’s ever designed is still in business. He is reportedly working on a new version of Twitter (codename “Fatter”) that requires a Flash programmer to execute any single tweet. According to unnamed sources, Fatter is exorbitantly expensive to use and takes twenty minutes to download, but “it looks really cool.”

Lingo Starr: With a Bachelor of Science degree in rhetoric (B.S.-squared), Lingo held various jobs as a VCR manual writer, an IRS tax form editor, and a lyricist for a band of Bob Dylan impersonators. He then discovered his skills naturally suited writing dotcom mission statements, terms of service policies, and business-website copy. His credits include the term “on a go forward basis” and the world record for most prepositional phrases in a single sentence. He’s most proud of having turned “leverage” into a verb and being the first to apply the word “solution” to every known business activity in the universe.

Jawn Smth: Jawn spent the early part of his career trying to buy a vowel for his last name, but the market for the letter “i” had been cornered by Steve Jobs. So Jawn naturally fell into naming Silicon Valley startups. One of his favorite tactics is to create contractions of Inuit words for fish; another is to spell Klingon verbs backwards. Despite insinuations from his rivals, Jawn claims no responsibility whatsoever for naming the semi-related companies “eBay,” “Skype” or “Joost.”  “Even I have no idea what the frak they mean,” he told reporters at Naming Conference 2.1.3.4 (aka “WWWord Uppp ’09”).

Ivana B.: As a child, Ivana frequently jumped off cliffs when other people told her to. She later became the first MBA to be hired as a dotcom creative director, whereupon she implemented the best practice of “best practices.” After misinterpreting the expression “Why re-invent the wheel?”, Ivana proceeded to copy every creative move of every market leader in the world, down to the pixel. A movement was born, and to this day, all websites in the same industry look exactly the same, creating massive efficiencies and redundancies at the same time. In late 2003, Ivana was working at a dotcom that unexpectedly became a market leader after all its competitors simultaneously failed to pay their server bills. Unwittingly, Ivana tried to copy herself and spontaneously imploded, creating a mini black hole just outside of Palo Alto.