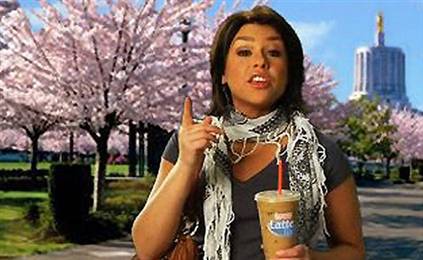 Full of Holes: The Extremist Attack on Dunkin Donuts

Like many people, I want 01.20.09 — Bush’s last day in office — declared an international holiday. But even with “the End of an Error” in sight, right-wing extremists continue to wreak their corrosive damage, and are now invading the seemingly sheltered world of corporate junk food…

The latest fiasco is an attack on Dunkin Donuts by neo-fascist Michelle Malkin, who apparently boasts the intellect of a sand flea. She pressured Dunkin to drop their online campaign featuring the vivacious Rachael Ray because (drum roll please) Ray is wearing a scarf. But not just any scarf. In Malkin’s myopic and hate-filled vision, the scarf looks like an Arab kaffiyeh, which “has come to symbolize murderous Palestinian jihad.”

Gee, who knew that Ray, an Emmy-nominated cooking show host of Sicilian and Cajun descent, was a member of Hamas? Well, she does look kinda Middle Eastern, and who knows what she could be slipping into her spicy sausage meatloaf patties?

The sad part? Dunkin Donuts capitulated to Malkin’s wallowing ignorance and yanked the campaign. I guess the donut chain saw its customers as true believers of Malkin and other ayatollahs of American demagoguery. “Hey, these people buy our unhealthy grub, they must be stupid.”

Imagine if they had stood their ground or even fought back? Dunkin Donuts is currently taking on Starbucks for the yuppie-coffee market, so what better way to reach out to the latte class than by standing up against Neanderthals? They could have won some new customers who think racism and paranoia are bad things. Instead, their capitulation has likely hurt their brand and their outreach (there are now Facebook groups calling for a Dunkin Donuts boycott), while ensuring that a steady supply of bigots and boneheads continues to patronize Dunkin counters.

It also gives Malkin clout and validation in addition to the publicity she so desperately craves. Nice job, Michelle, in trumping up coverage for your virulent anti-American jihad. In fact, why stop there? Why not force Kentucky Fried Chicken to drop Colonel Sanders as a symbol? After all, he’s a bearded man with a military title, and that evokes Fidel Castro…

Or how about protesting that talking Beetle that’s the new spokesmodel for VW? He speaks with a German accent, and we all know that Volkswagen (the “People’s Car” in German) was commissioned by Adolf Hitler. In fact, shouldn’t we ban VW in general because they symbolize German extremism?

Oops, I forgot, you dig on fascism. My bad.

Even if Ray’s scarf were a kaffiyeh — which it wasn’t (it was actually a paisley print, as can be seen in the photo) — wouldn’t that be a good thing? A kaffiyeh is not a symbol of extremism; it’s a common adornment in certain Arab countries, like neckties. And wouldn’t it be a GOOD thing if more Americans connected with the everyday people of the Middle East by understanding their culture and sharing in it? Unfortunately, “understanding” is something the wingnuts refuse to do, and which they don’t want anyone else to do, either.

Ironically, this blind hatred by our extremists is identical to the blind hatred by their extremists. Wouldn’t it be cool if we ordinary citizens of both sides could round-up our respective extremists and throw them into a giant octagon together where they could fight it out armed with nothing but their bare hands and oversized egos?