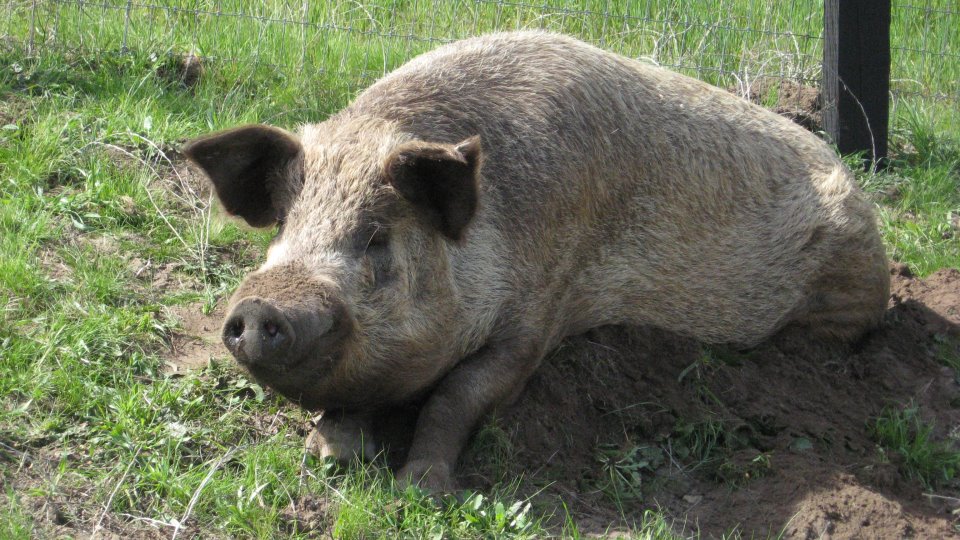 I love to dis and dissect social media hype, but proving that I’m not all naysaying and negativity, here’s one social media success story that did make a difference. A BIG difference. In fact, it saved a life… 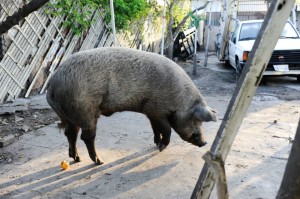 The concrete jungle was Charlie’s home. Photo by Sara Cozolino.

Weighing in at 500 pounds, Charlie has a vocabulary limited to grunts and squeals. He doesn’t know how to use a computer or even type, and consequently his Klout score is zero. How unsocial could he be?

Yet once upon a blissful time, Charlie spent his days hanging out with his family in Los Angeles, not giving an oink about posts and likes, pokes and shares.

Then he had to go…

The family who had raised Charlie since he was a piglet was losing their home. They couldn’t move him into an apartment, and a quarter-ton pig isn’t something that they could foist upon friends or put up for quick adoption.

Plus, they worried that whoever adopted Charlie might have more nefarious plans. Even their friends and neighbors suggested turning Charlie into carnitas! So the search was on for a safe home for this beloved family member.

And that’s when social media came to the rescue.

Contrary to popular belief, Facebook isn’t just good for posting photos of what you had for breakfast. Facebook’s greatest attribute: enabling people to share their passions and collaborate on them.

Indeed, my friend Kris Kelly wants to give Mark Zuckerberg an award for it.

Kris runs the 501(c)(3) animal rescue organization The Kris Kelly Foundation, which doesn’t have money for traditional advertising. No TV spots with celebrities saying, “For just $1 a month, you could save this schnauzer…”

In the beginning, Kris relied on phone calls, emails, and lots of legwork. Then came Facebook, which enabled Kris to cheaply and easily share photos, stories, and calls to action with everyone in her network and their networks and even strangers. Since then, The Kris Kelly Foundation has successfully used Facebook to procure fosters and permanent homes for hundreds of dogs and cats — even facilitating an airlift of chihuahuas from L.A. (where there’s an overpopulation) to the East Coast (where there’s a waiting list to adopt them).

After Kris heard about Charlie, she immediately launched a campaign through the Foundation’s Facebook group. This was an urgent and unusual story, and in social media, urgent + unusual = virality. The word quickly spread across the country.

At first, Charlie’s salvation appeared at hand. The Pig Preserve in Tennessee offered to take him, but the cost, extensive veterinary requirements, and logistical nightmare of transporting a live pig thousands of miles proved too steep.

Meanwhile, the window of opportunity was closing on Charlie.

But the network wasn’t done yet.

Drive about 120 miles up the coast from L.A. and you’ll come across the Danish-themed city of Solvang, CA. With its windmills and Hans Christian Andersen museum and Danish ham sandwiches, Solvang is probably the last place you’d look to send a pig.

But up in the hills is a 5-acre sanctuary for pigs called Lil’ Orphan Hammies. LOH takes in former pets who outgrow their homes and their welcome. (“Miniature” pigs don’t stay miniature for life — their average adult size is 200 pounds.) The sanctuary also provides elderly, infirm, and unadoptable pigs a pleasant place to live out their natural lives.

So a massive piece of the puzzle fit into place: where to send Charlie. But the challenge remained of how to get him there. Charlie wouldn’t exactly fit into Kris Kelly’s car, and the back of a pickup truck isn’t a safe way to ship a pig.

Again, the social network came through, this time with a horse trailer, someone to make the drive, and an all-volunteer crew who showed up at 7 a.m. to coax an alarmed 500-pounder into making a road trip. 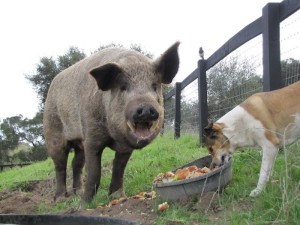 Charlie and friend at Lil’ Orphan Hammies. Photo from LOH.

Today Charlie thrives at Lil’ Orphan Hammies with a new family consisting of other pigs, a dog ,and impassioned caretakers. Since L.A. never gave Charlie a taste of nature, he instantly fell in love with his new rooting grounds. According to LOH:

“Charlie made himself right at home (apparently he didn’t have much experience with dirt and mud and was quite excited to ‘discover’ it). He is very friendly and obliging, and instantly got along with the other animals (even sharing his meal with Sandy the sanctuary dog!) despite the fact that he had not previously had any real animal contact.”

“Some of the family members were unsure as to where Charlie had been taken, and were still worried that he would be someone’s BBQ. When we confirmed to them today that he was alive and very content, Charlie’s former owner shed tears of joy over the phone. We are so happy to have Charlie here and so happy to have been able to give them peace of mind over their much loved pet! We just love happy endings!”

So for just this once, let’s not talk about IPO’s and ROI’s. Charlie’s story demonstrates the value of having a great social network.