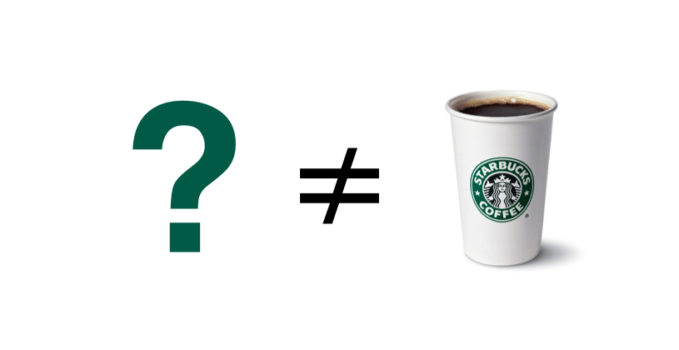 Suddenly Everyone Is Starbucks: False Equivalencies Are The New Black (Coffee)

by Freddy Tran Nager, Founder of Atomic Tango + Consumer Of Both Digital Media And Coffee In Vast Quantities At The Same Time…

MBA programs today must be teaching young marketers to compare everything to a Starbucks latte.

You’ll likely see this in marketing for digital media, which will boast that an app, download, or subscription costs less than a cup of Starbucks — and you’ll get so much more for your money!

Privately, the marketers will lament that consumers are paying so much for a fleeting cup of coffee instead of some wicked awesome digital pleasures.

You see the problem here: what’s a digital product got to do with a caffeinated liquid?

It’s the classic comparison of apples with oranges. Or, as we academics say to feign sophistication, a “false equivalence.” The two products are too different to compare.

Stubborn marketers will respond by saying that, of course, digital media and coffee absolutely differ on a molecular level, but both offer stimulation and, thus, serve the same need.

These marketers misinterpret the VALUE of a Starbucks coffee. For the brand’s fans, it’s much more than the caffeine kick. Even though they can make equally good coffee at home or the office, faster and for less money, they’ll stand in line at Starbucks for the privilege of paying much more for the same thing.

That’s because the true value of Starbucks isn’t the coffee, it’s the trip.

I see it in modern offices where coffee flows freely in the kitchen, but at least once per day, several parties trek to a nearby Starbucks to queue up. These aren’t execs with money to burn; they’re typical employees for whom this daily fix adds up to a sizable annual expense.

So why do it?
Escape.

The Starbucks run serves as the cigarette break for a generation that mostly doesn’t smoke but still needs to alleviate the duress and drudgery of the daily grind. Starbucks CEO Howard Schultz created a “third place” beyond home and work for these people to seek refuge. Even if they only have time for a grab and go — visit, line up, issue arcane orders (“half-decaf extra hot with steamed soy and a shot of espresso”), wait, pay, sugar up, and return to their desks — that’s a brief breather from the pressure cooker.

Call it venting with a venti.

What’s more, the physical visit to caffeine nirvana psychosomatically increases the overall stimulative effect: the coffee just seems stronger and tastier. Above all, these runs enable office drones to make it to the end of their workdays. It’s not just pleasure — it’s survival and sanity.

That might sound hyperbolic, but until you’ve endured the same 8-hour routine 5 days in a row 50 weeks per year (which most academics and marketers rarely experience), you can’t appreciate the total impact.

What digital media provides all that?

A video game or a movie might offer an escape — if you work for a company that allows entertainment during non-break periods. Even if that were the case, those media still require staring at a screen, and 21st century professionals already spend too many hours doing that.

Music certainly helps hours flow by, but unless you can bust a few moves between cubicles, mere sounds won’t provide much physical relief.

And forget social media, which tends to contribute to eye and soul fatigue, if not complete madness.

So Starbucks provides a real physical and mental relief that enables most people to survive their jobs, schools, families, and life in general. And that’s why they’re more likely to fork out $5/day for their coffee than $5/month for some digital media service.

You’ll see other examples of unspoken value in America:

The key takeaway: we marketers should never make assumptions about customer “needs.” Before comparing any two products, we must really dive into WHY people buy them. Indeed, we should experience them for ourselves. There may be far more “value” than meets the eye — or the palate.