Identity Theft + Apathy = All the Reason You Need to Avoid Twitter

by Freddy Tran Nager, the ONE and ONLY, of Atomic Tango LLC

So there’s a department at Twitter called Twitter Trust & Safety. For that alone, they should be sued for false advertising, since Twitter can no longer be trusted to protect the safety of your ideas and identity.

I’ve been on Twitter for several years now in the form of my company profile, @AtomicTango. Here’s what my actual profile looks like: 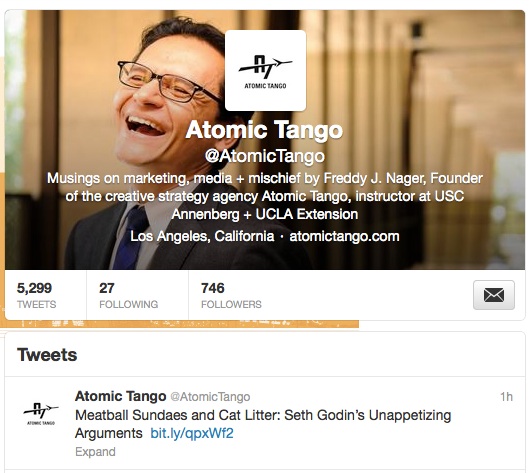 I was doing a routine search on Twitter for my agency name. Most of the time the findings consist of people retweeting me or sharing one of my blogposts. I then take the opportunity to thank them. But this time the search turned up several other Twitter profiles also called Atomic Tango. Now there’s a French punk band called Atomic Tango and a YouTube video called Atomic Tango, but these Twitter profiles had nothing to do with them. Instead, they had everything to do with me: although the accounts went by slightly different handles — @AtomicTango6 and @atomic_tango — they both featured my company bio, complete with my personal name. Here’s what they look like: 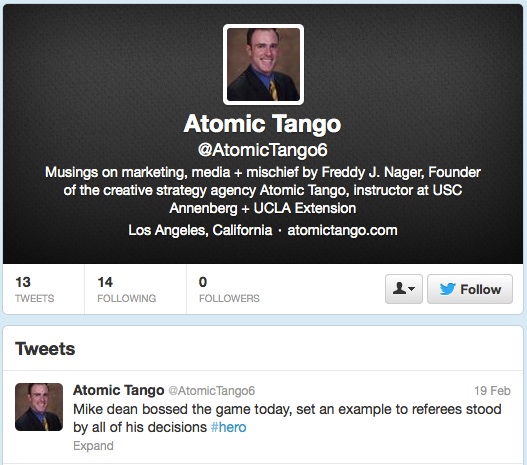 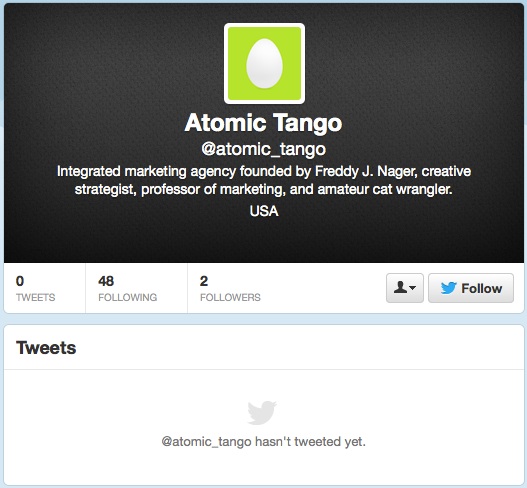 Both are spammer accounts. They’re borrowing my identity to create trust and credibility, and are tweeting mostly nonsense for the time being. Eventually, though, once they get enough followers, they’ll use those accounts to follow and retweet on the behalf of losers who pay other people to follow and retweet them. It won’t be long before these accounts use my name to shill cheap Viagra or worse.

So I filed a complaint with Twitter. And let me tell you, filling out your taxes is easier. You have to fill out a form and fax (yes, fax – how negative-2.0 of Twitter) a copy of your drivers license to them.

A week later Twitter responded, but not with what I expected. Instead of telling me that the impersonators had been removed, they decided to do NOTHING:

Based on the information you provided in your report and our investigation of the account, we have been unable to determine that the account you reported is in violation of our Impersonation Policy (https://support.twitter.com/articles/18366).

If there is information on the account that shows a clear intent to assume your real identity, please reply to this email with a detailed description of the information. This could include @replies, links to reproduced content, or other Tweets. This help page explains how to find a Tweet’s status link:

So, ikejanes, whatever you are (I’m guessing an auto-reply bot), what part of “THEY’RE USING MY NAME AND MY BIO” did you not understand? I had even included screengrabs of those offenders that showed that they weren’t just similar accounts, they’re nearly identical to mine! 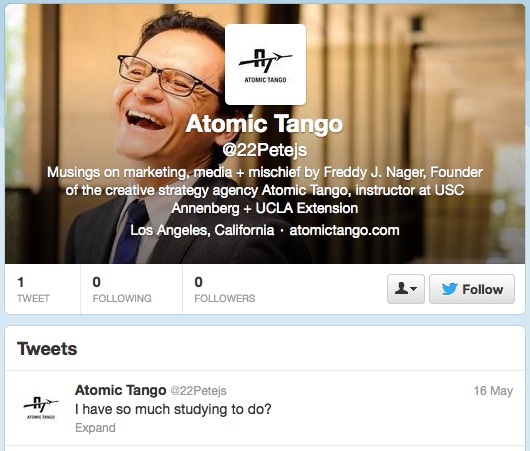 Yet another fake Atomic Tango profile.

I guess I should be flattered that my tiny Twitter profile is warranting so much I.D. theft attention, but I’m not exactly smiling. I’m also guessing all three fake profiles are the work of one spammer, who will continue to replicate them until he’s stopped. But he’ll never stop, because Twitter won’t do a thing. Twitter is a con artist’s dream network.

A friend of mine told me that his company is taking legal action against Twitter for not dealing with imposters. So I’m thinking I might have to do so, too.

As someone who teaches Twitter, I’m also wondering why Twitter won’t do more to protect their users. I can only surmise that they don’t want to remove fake and abandoned accounts, because that would make Twitter a fraction of what it is now. And that’s not what their founders want to tell gullible advertisers and gullible IPO investors.

So I’ll just state it here: Twitter hosts millions of spam and dead accounts, and will do nothing about them, even when they’re hurting legitimate users.

You can see for yourself: pick a celebrity or a major corporation. Search for them on Twitter and dozens of imposter profiles will come up. You can usually tell they’re imposters by the quantity and quality of the people they’re “following”: real celebrities don’t usually follow thousands of strangers, while having only a few followers. To remedy this, Twitter created “verified accounts” for celebrities and corporations, but they won’t remove the imposters. At least, not until after the IPO and advertising deals are signed.

So in the meantime, the rest of us just have to take it. No use cancelling my Twitter account now — that will just cede my identity to the imposters.

It will, however, make my teaching of Twitter in classrooms and boardrooms very, very different.

UPDATE 6/4/13: After receiving an angry letter from me, Twitter removed just 1 of the 3 fraudulent accounts I complained about. When I asked about the remaining 2, they told me that I had to fax them my drivers license, which they already have on file! What complete incompetence. If Twitter were a government agency, people would be screaming for privatization. But no, this is a for-profit company in action. Or should I say inaction?

UPDATE 6/11/13: Mission accomplished. After weeks of my sending emails and faxes, posting angry tweets and this blogpost, Twitter FINALLY removed the last remaining impostors. This time the person helping me was an “edwardmayfair” (the useless “ikejanes” has left the building). I will keep the scan of my drivers license handy, though, because identity theft on Twitter is rampant, and it will likely happen again.

UPDATE 7/24/13: No surprise – Twitter also borrowed some user identities without their knowledge.