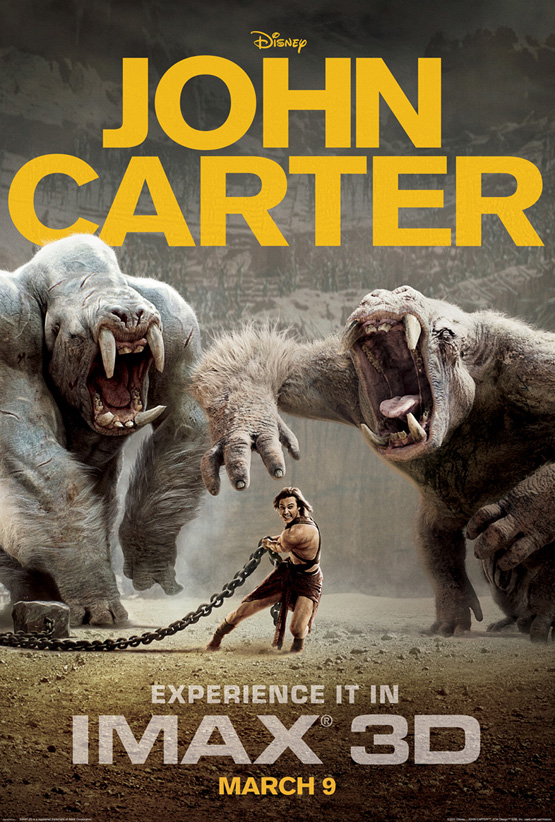 by Freddy Tran Nager, Founder of Atomic Tango + Lifelong Fan of the Warlord of Mars…

Or more exactly, the fact that Disney used his name as the title to his movie.

Creating the second-worst sci-fi movie title of all time, Disney named this $250-million epic about red planet warfare “John Carter.” Yes, really, “John Carter.” Think about it. I mean, how can you not feel your blood racing at the sound of it? How does it not simply evoke a flaming pageantry of exotic images?

Or are you thinking, “Isn’t that the brother of Jimmy Carter?”

Blame It On the Usual Suspects

How did this travesty occur? According to director Andrew Stanton in the L.A. Times:

“I was in the middle of reshoots, and marketing came to me and said, ‘Look we’ve done all these focus groups and not a single woman is gonna come see a movie called ‘John Carter of Mars’ … I was a little bummed about that (but) … I changed the ‘Princess of Mars’ to ‘John Carter of Mars’ because I thought no boy would go to the film. So I’m victim of the same exact thing.”

Let me translate a portion of that for you non-Los Angelenos. When someone in Hollywood says they’re “a little bummed” by a studio decision, them’s fighting words. Stanton’s really saying that he was pissed out of his mind and probably lost sleep for a week thinking about the one-kiloton dud of a name draped around his film’s neck.

Feel his pain: these so-called “marketing” guys – knowing Disney, a bunch of spreadsheet jockeys with MBAs – overrode the director and made a major creative decision based on focus groups (the worst source of insight ever) to avoid alienating a segment (women) who wouldn’t pay to see this movie even it was called “The Help Wears Prada while Having Sex in the City: New Moon.”

Yo, suits without spines: It’s a movie about a guy with a sword fighting giant green men on Mars. Get with the program. Young men are the target here. Make the boys come see it, love it, spread the word, then convince the girls to join them. Omitting “Princess” from the name made sense, but omitting “Mars”?

Let me guess: these faux marketers probably would have renamed “Star Wars” something like “Star Dysfunctions,” and “The Terminator” would be called “Daddy’s Back, and Look Who He Brought With Him!”

It Could Be Worse

“John Carter” should have been called “The Warlord of Mars.” But unfortunately, I wasn’t part of this almighty focus group.

But what’s done is done, and – surprise, surprise – Disney is encountering less than wild enthusiasm from the masses, despite $250 million in special effects, a classic sci-fi brand, and participation from Pixar wizards. Having a bad name – whether it’s for a movie or a Web 2.0 startup – just means you have to invest much more in marketing to get to square one. Good luck also selling the video game called “John Carter.” Putting that “Disney” name (which just says “adult action movie,” no?) above the title should help (insert eyeroll).

If there’s any consolation, at least the film wasn’t called “Serenity” (the worst sci-fi movie title of all time). Yes, kids, once upon a time in a galaxy just around the corner, someone decided to make a brilliant sci-fi thriller sound like a tea house or feminine hygiene product.

And yes, it failed, but it wasn’t the aliens that shot it down in flames.

P.S. Finally saw the movie and found it thoroughly enjoyable. Yeah, the beginning was a mess, and the nonsense about the godlike Therns should have been killed on conception, but this was far better than any of the “Transformers” tripe. And other viewers, from my friends to reviewers on IMDB, enjoyed it, too. Apparently, the “word of mouth” on the film was not about its quality, but that it was a bomb, which only fueled mass avoidance. So given the inane title and the inability of Disney to control the message, I nominate “John Carter” for the worst marketing campaign of the year. 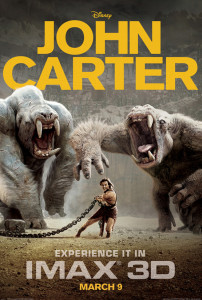 And so the marketer got the toothsome fate he deserved…