Game Of Drones: Why Klout May Be More Risk Than It’s Worth

I often start my posts with a joke, so here it is:

Not laughing? That’s because the joke may be on marketers who think Klout is a good tool to promote their brands. Why? Because not since spam has any marketing tool engendered this much hostility. Foursquare comes close, but Klout occupies its own circle in marketing Hades, nestled between telemarketers and those talking banner ads that proclaim you’ve won a free iPod.

Consider this cartoon from the popular webstrip xkcd: 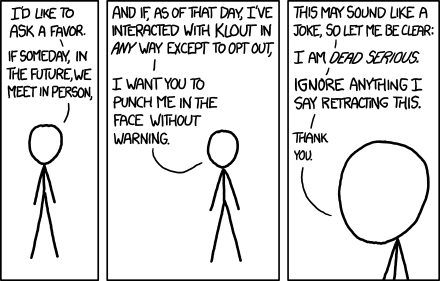 The cartoon was featured in TechCrunch by a sympathetic writer and—

What’s that? You don’t know what Klout is or why it should provoke such raw anger from a cartoonist? Lucky soul. That’s like not knowing what waterboarding is. I envy your innocence. Now let’s despoil it…

What Is Klout And Why Should You (Not) Care?

Klout is a tool that measures your “influence“ in social media. I emphasized the quotation marks there, because that “influence” is completely metaphorical.

What Klout truly measures is your celebrity status combined with your willingness to play the game. For all its hype, Klout is essentially an online contest where users compete for points and imaginary accomplishments that they can drone on about. Kinda like Farmville without cute animals.

The game uses a secret algorithm that measures how much time you invest in social networking, your number of fans/friends/followers on those platforms, their Klout scores, and how much all the participants repeat each other. Really. I know, that sounds like watching paint dry, grass grow, and continents drift. The secret algorithm then assigns each player a numerical rating.

Who has the highest Klout score and is, by definition, the most influential person in the world? No, not the Dos Equis man. (That would be cool.) It’s Justin Bieber. Need I say more? The Bieb outranks President Obama, Rupert Murdoch, Oprah Winfrey, and all the VC’s in Silicon Valley who funded those social networks in the first place. All bow before the Bieb.

Among the noncelebrities, I recently met a guy who kept droning on and on about his Klout score, and how he was the most influential man in the world in three categories. His real-life social ineptitude would have prevented him from selling water in the desert. In fact, the only thing this “influencer” convinced me to do was RUN AWAY, RUN AWAY!

In short, Klout measures whether you’re already a celebrity, or whether you have the time (or staff) to play around on social networks all day. If you’re a CEO or world leader who’s too busy to play because you’re running a major corporation or entire country, tough luck. According to Klout, you have no influence.

The Marketers Fall For It

Now, in normal times, Klout would be dismissed as fantasy football for the Wired crowd (except that even Wired doesn’t dig Klout that much).

Unfortunately, these aren’t normal times: we’re still stuck in Web 2.0 (at least until Twitter’s stock price hits single digits), so some marketers are latching onto anything that has the word “social” associated it, no matter how much it could eviscerate their brands (see “Groupon”).

For example, Cathay Pacific is inviting anyone with a Klout score over 40 to freely join their business and first-class passengers in their SFO lounge. Sweet perk, huh? Beats anything you get from playing Angry Birds.

What will Cathay Pacific get out of it — besides ticked-off business and first-class passengers who suddenly find themselves surrounded by living tools? Well, the airline did score a lot of publicity from this stunt (including my rant that you’re reading now). But primarily, their hope is that these “influential” types will tweet/post/spew something positive about Cathay Pacific.

So what’s wrong with that? That’s just managing “word of mouth,” right? To give Cathay Pacific the benefit of the doubt, some Klout leaders do have legitimate influence, and what crumbs they fling out get snapped up ravenously by their social flocks. For example, if Justin Bieber were to say, “Ooh, baby, baby, Cathay Pacific is, like, my baby, baby, you know, baby, baby?” then millions of 12-year-old girls would want to fly Cathay Pacific, too.

But there are two potential pitfalls:

In fact, the backlash has already begun. Look at these first three comments in TechCrunch regarding Cathay Pacific’s Klout promotion:

I particularly like the second post, which shows you the sentiment of a young techie in Silicon Valley — precisely the kind of person Klout should be attracting. Then there’s TechCrunch founder Michael Arrington, who knows a little about being ridiculous, calling something “ridiculous.” And last I checked, he has real influence.

So What If You Can’t Please Everyone?

Defenders of Klout (mostly Klout players, self-proclaimed social media gurus, and people who sell books about Klout), will argue that if it works for some people and some companies, why knock it? It’s just another medium.

Case in point: in that TechCrunch article featuring the xkcd cartoon, there’s a comment by Mark Schaefer, whose Twitter bio proclaims him to be “Chieftain of the social web’s most unique blog” (yes, he wrote “most unique” and he’s a marketing professor)…

“I’m wearying of articles that are anti-something just because somebody thinks it’s ‘stupid.’ If anybody wants the real low-down on Klout, I have written a book on the social influence trend, including research on how power and influence is evolving online and what Klout really does. It’s called ‘Return On Influence'” Please read it if for no other reason than we can stop seeing garbage like this.”

Nice self-promotion there, prof. My response? A true researcher of Klout wouldn’t “weary” of articles like these; he would include these articles in his data and analysis. If the very tool designed to measure “influence” is engendering public hostility, that’s critical for marketers to know. If a significant percentage of social media users — including truly influential ones in TechCrunch and Wired — believes that a particular tool is “stupid,” what is the risk and return for the marketer who uses it?

We marketers should start seeing Klout in the same light as spam, telemarketing, talking banner ads, gratuitous sexual imagery, commercials during the Rush Limbaugh show, Foursquare check-ins, sticking flyers under the windshield wipers of cars, and the “Head-On” commercials…

All those tactics work to some degree, otherwise marketers wouldn’t still be using them. But all those tactics also annoy a lot of people. If that’s how you make a living, all the power to you, but be prepared to undermine your brand.

And that’s no joke.