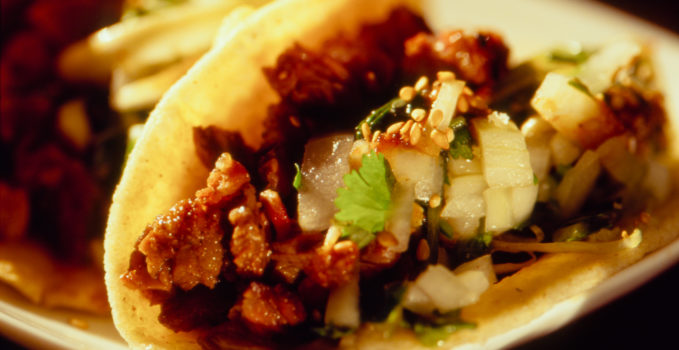 I just waited an hour-and-a-half in line for a taco.

Make that 97 minutes for four tacos and two burritos, to be exact. I had started out wanting only a bite from the legendary Kogi Korean BBQ taco truck, but by the time I made it to the front of the line, I hungered for more and had to justify my adventure.

There’s great marketing at work for ya…

No, there’s no taco shortage in L.A. One of the reasons I love this city is that, wherever you are, you’ll find someone selling tacos within walking distance. Nor, apparently, is there a shortage of people who can afford to spend two hours on a Tuesday afternoon for lunch. (Long live the entertainment industry!)

The reason behind the infamous Kogi line is that Kogi’s founders started with a great product and knew how to manipulate social media. Waiting in that line became part of the attraction dubbed “Kogi kulture.” In line today, every other person was typing into their cell phones and taking photos. Souvenir photos of a lunch truck? That’s gotta be a first.

Kogi’s founders, Mark Manguera and chef Roy Choi, decided to sell gourmet tacos through a couple of L.A.’s ubiquitous lunch trucks (sometimes derided as “roach coaches”) usually found at construction sites serving cheap grub to workers who can’t take long lunch breaks. Your standard lunch truck is definitely not known to have a top chef in the kitchen or require hours in line.

Crazy idea? Well, most good buzzes start with crazy. Perfectly rational ideas generate little more than a small mention in a local business journal. And if you’re crazy, L.A. is all about fusing imagination and business. I couldn’t work anywhere else (I’ve tried).

Kogi also fuses two of L.A.’s major cultures, Mexican and Korean. “Kogi” means “meat” in Korean, while “taco” means “ethnic dish that is often horribly abused in the hands of greedy fast-food corporations but is a wickedly rewarding slice of culinary heaven when created by somebody who gives a damn” — or something like that.

L.A. also has a large social-media-savvy population that’s following the story (and the truck) on Twitter, where Kogi does most of its marketing. As my regular readers know, I’m a critic of Twitter, but I know a few companies derive value from it. Twitter certainly fits a constantly moving business that needs to alert its fans of its current whereabouts. The fans, in turn, get a kick out of subscribing to a business that lets them in on its secrets.

Then there’s that one mandatory L.A. element that enables a lunch truck to gain popularity: awesome weather. It’s a lot easier to wait in line and dine outdoors when it’s nearly 80 degrees on St. Patrick’s Day. I don’t think this would work in Minneapolis in March.

Not being Kogi follower, I didn’t know where they would be, and just happened to come across one while strolling through my neighborhood. At first I saw the line in the parking lot of a loft-sales office, and I thought, really? People waiting for real estate in this market? Then I saw the true attraction: the Kogi truck. And while I don’t have queue-philia — indeed, I’m usually allergic to long lines — I had to join in. The curiosity was killing me. I could justify it as marketing research, and I’m self-employed, so what’s two hours for lunch?

But, man, was that a long wait. Kogi needs street performers to entertain the assembled masses, though they’d probably tire out. A few potential customers bailed. One guy complained to his friends a few times (“I can’t believe you talked me into this… I’m never doing this again…”) but stayed put. Others were like me: curious first-timers who had to taste firsthand what all the buzz was about. Most were relatively young, or looked like people who might use Twitter (“Dig my faux-hawk? How about my nostalgic/ironic/indecipherable graphic T-shirt? Have you heard the new iPhone yet?”). Some had come from the office towers across the street with lists of provisions to get for the inmates.

I finally made it to the front of the line, and behaved just like an L.A. Times article on the Kogi Truck said I would: “Once people have waited in line, they tend to order a lot, pushing the average check near $20.” My tab came to $19.50. And the verdict?

Kogi’s spicy-sweet sauce and the crispy cabbage perfectly complement the meat (pork, chicken, or beef shortribs), and the soft taco shells hold it all together, both physically and sensationally. Lots of great textures in one bite. I would readily order those again… if I didn’t have to wait 90 minutes in line. That said, I would be willing to try Kogi’s new sit-down menu inside a Culver City bar called the Alibi Room.

And perhaps that’s what the trucks, the Twittering, and the long lines are all about: together they ingeniously promote a brick-and-mortar location (with perhaps more locations on the way). Kogi also proves that, even in the depths of a recession, creative marketing and good cooking can still whet the appetite.

And on that note, I’ve got some leftovers to tackle — I’ve waited long enough. Mani deuseyo, amigos!