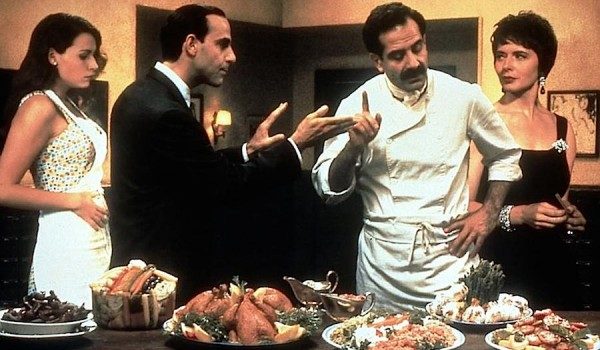 A Side Order of Spaghetti: Why Listening to Customers is Nothing New — or Even Necessary

by Freddy Tran Nager, Founder of Atomic Tango + Italian Cuisine Junkie; photo from the movie “The Big Night” (see below)…

The way social media-philes talk, you’d think that businesses had been ignoring customers for thousands of years. The socmeds ascend their virtual mounts and issue pronouncements like “2010 will be the year of listening to the customers needs” and “customer service is the new marketing.” [Update 3/10/2019: I had to update that link to a more recent article, since the original disappeared. Nearly ten years later, I had no trouble finding multiple articles with the exact same sentence.]

Nice sentiments, but hardly new, and not exactly the perfect business strategy, either…

You know the expression “the customer is always right”? The first variation can be traced back over a century to 1908, when legendary hotelier César Ritz advertised “Le client n’a jamais tort” (“The customer is never wrong”). Then came the great wave of department stores of the early 20th century. Department store founders Harry Gordon Selfridge and Marshall Field are both credited with giving Ritz’s expression its now positive English spin. John Wanamaker later used “the customer is always right” to promote his Philly stores.

Advertising slogans aside, how about methodically incorporating customers into formulating business strategy? That’s got to be relatively new, right? Only if you consider the 1950s recent. Peter Drucker wrote about the value of putting customers front and center in his book “The Practice of Management,” and about the same time, John B. McKitterick put it into practice at General Electric.

Indeed, I would argue that listening to customers intently dates back to the first nervous innkeeper taking drink orders from some heavily armed Xia Dynasty warriors. Over the ensuing 4000 years, waiters everywhere have had to endure the whims and whines of customers. The 1996 film “Big Night” (one of my all-time favorites) brilliantly depicts one such scene in an Italian restaurant:

This scene depicts what’s wrong with listening to customers: they’re not always right. In fact, as I’ve written in previous posts, customers can be infuriatingly out of their minds. Ask any veteran chef, painter, architect, filmmaker, writer, engineer, or even doctor about listening to customers, and you’ll likely get an earful of rants about having to take orders from tasteless sacrilegious heathens. It’s the classic conflict between art and commerce made personal and amplified by a thousand new social platforms.

What’s more, customers don’t always say (or even know) what they really want. For example, they might say that they want great customer service, but they’ll abandon their friendly neighborhood mom-and-pop shop to save a few bucks at Walmart.

Now I’m not saying that the customer is always wrong, either. My regular readers know that I frequently level potshots at companies who arrogantly commit crimes against humanity. (Yeah, I’m talking about you, Microsoft… *$%#! Vista.)

So what’s the solution?

Balance. Yes, listen to your customers and learn about their needs and issues. Then, when you’re done, turn to your experts — no, not the guy who splits his time between Twitter and Wikipedia. I’m talking true experts with the top-shelf education and professional experience in the subject and industry.

But don’t just stop there.

What is your competition doing? Watch their every move, as well. After all, if you and your competitors are both researching and listening to the same customers, you might produce an identical product, and if that happens, you could wind up in a devastating price war. Finally, don’t forget to train an ear on the members of your community: what you think is the perfect product might not sit well with a local politician, journalist, or interest group.

In other words, customers are just one voice in the cacophony. It’s up to you, the manager, to listen to them all, to separate the worthwhile signals from the noise, and to strike the right balance between them. Yes, you might fail to find that balance, but that’s why you get paid the even sweeter salary with the stock options and executive retreats in Aruba.

Listening to customers is nothing new, nor is it any guarantee of success. Thanks to all the pseudo-experts online, it just happens to be il speciale del giorno. Nice suggestion, but keep reading the menu.

If you liked that, click this: Don’t Believe Everything You Hear: Why Listening to Your Customers can be Hazardous to Your Health