Customer: Do you have “I Just Called To Say I Love You”?
Barry: Yes.
Customer: Can I have it?
Barry: No.
Customer: Why not?
Barry: Because it’s tacky sentimental crap that’s why. Do we look like a store that would sell that song? Do you even know your daughter, there’s no way she likes that song. Oh I’m sorry, is she in a coma?
— from “High Fidelity,” the movie

A buddy and I were reminiscing about small independent record stores. Remember them? No? Damn youngsters… Alright, go download the 2000 movie “High Fidelity” on iTunes and I’ll wait for you to watch it. (I’d recommend the 1995 book, but I know your generation won’t read anything made from dead trees.)…

“I’m serious, dude: in the future, we’ll be replaced by a virtual record store run by computer geeks. But don’t worry, that won’t happen for like another 50 years…”

Now, you’ll notice in “High Fidelity” that John Cusack runs a small indie record store — not an ecommerce site, but an actual brick-and-mortar establishment. That’s not something Hollywood made up: people actually used to buy music in tiny physical stores that sold nothing but. Really. And I’m not talking MP3’s but round pieces of plastic that contained 8 to 12 songs that we consumers didn’t even choose — we let the record companies do that. Crazy, huh?

Indie record stores were great places to kill time and discover new artists played over the speakers by grumpy store clerks. (And record store clerks were always grumpy, as if working for a living offended the tattoos on their bodies. In “High Fidelity,” Jack Black plays an ever-offended clerk hopped up on caffeine and Tasmanian Devil dust). Hanging out in a small indie record store is how I chanced upon up-and-coming artists like Rilo Kiley and Nerf Herder.

Despite offering entertainment, discovery and free band stickers, these small stores died off, one by one. Some were evicted by soulless, punkless and rockless landlords who could command higher rent from Jamba Juice franchises. Many were crushed by city-block-sized super stores like Tower and Virgin that could carry thousands of titles and sell high-profit headphones and T-shirts at the same time. And nearly all physical record stores of any size were wiped out when music consumers made their inexorable march online.

I’ll skip the rest of the music industry’s sordid history and just mention that one key attraction of the online marketplace is that consumers can find both popular and obscure music just keystrokes apart. It’s like having an indie store and a super store in one site. Yes, the popular hits still dominate — what Britney wants Britney gets — but because digital storage space is relatively cheap, the iTunes and Amazons of the world can also carry esoteric offerings, such as Rilo Kiley’s entire back catalog. It’s that niche music that creates the long-term earnings known as the “long tail.”

Where Our Tail Begins 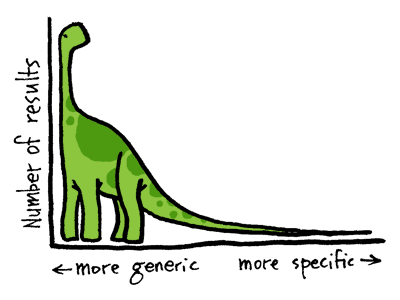 Chris Anderson coined “Long Tail” in the October 2004 issue of Wired. The term refers to the millions of obscure products that have little demand each, but together constitute a massive market. On a geeky business demand chart, the “long tail” refers to that area under a demand curve that stretches infinitely to the right. Anderson does an extraordinary job of describing the long tail, so I won’t repeat it here.

In short, the Internet’s low storage and distribution costs enable online media retailers to offer a wider selection than physical stores can. For us writers and other artists, it also means that the work we created years ago can still be discovered. For example, most physical copies of the October 2004 Wired have probably been recycled or landfilled, but thanks to cheap online storage, you can enjoy Anderson’s article five years later.

Based on this long tail argument, many entrepreneurs plunged into the digital-media content fray… only to find that making money on it was a lot tougher than promised.

What’s the problem here? Anyone? Anyone?

Case in point: I met this one long tail entrepreneur who built an expensive video site devoted entirely to foreign and indie films. We’re talking some really obscure stuff, like an old Berlin Film Festival silver-medal winner (not gold, but silver) that had been watched only by the judges, the filmmaker, and the filmmaker’s three friends who came along hoping to meet actresses. This entrepreneur licensed hundreds of films like this and waited for the fans to come… and waited… and waited… Where were the millions of niche-media lovers?

Some did come, but the numbers wouldn’t crack a smile on the face of your average YouTube director. Meanwhile, this entrepreneur had to pay for his staff, his Silicon Valley cube farm, and the servers to store and stream those films. Desperate for traffic, he began to stock his online store with critically acclaimed, award winning, avant-garde tours de force such as… “Ferris Bueller’s Day Off.”

Besides undermining his artistic pretensions — essentially flushing his brand away — this move also took him into direct competition with another website that offers foreign and indie films alongside popular hits. It’s called “Netflix.” Maybe you’ve heard of it? Meanwhile, another competitor called “iTunes” is beefing up its mix of short- and long-tail content. And then there’s this other site called “Amazon”…

On the Web, there’s little reason to have multiple competitors doing the exact same thing. Wal-Mart quickly recognized this and gave up trying to compete against Netflix, and if Wal-Mart couldn’t beat ‘em, what chance do individual entrepreneurs have? Consequently, just as in the physical world, indie media stores are getting squashed online, too.

So is there any hope for the little guy trying to capitalize on niche content?
Oh yeah — but there are some important guidelines…

1. Watch your head — your overhead, that is. My blog gets a lot of long tail traffic. Indeed, most of my views come over the course of months as people stumble upon my posts while searching. Sometimes, I’ll post an article, and the first week’s views will make me think it’s a dud, but it will spasm to life a year later as someone discovers it accidentally, gets offended by something I wrote, and sends it to all of their friends.

The reason my old posts can remain online to gather these views is because they don’t cost me a dime. I pay no hosting fees. No office space dedicated to just Cool Rules Pronto. No labor beyond me writing new articles. Now I know that such piggybacking on an over-generous Web 2.0 service is not an option for many businesses, so you might have to spend money to keep your venture going. Still, if you’re holding out for the long tail, you need to be as stingy as possible with fixed costs. So let some over-funded startup lease that cool office space above the Starbucks; stick to the cheapest hole you can endure until you actually turn a steady profit. 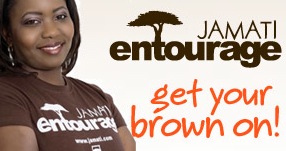 2. If you’re going niche, go all the way. If you like, say, African music, don’t just write a blog about African music — odds are, that won’t generate enough income to keep your personal music collection up to date. If your goal is to create a business, then consider developing an entire online portal that’s dedicated to all contemporary African culture, including movies, books, fashion and sports. Go deep and go wide within that niche. That’s what startup Jamati is doing: developing a destination site for the entire African diaspora community, people who love contemporary African culture, and Africans themselves. That’s not just a long tail, it’s a meaty one.

So find your niche community and think, what more can I offer them? What can I do to make my site a daily destination where they’ll want to hang out for a while? Jamati is still small, and its revenue model needs development, but it’s steadily growing. Its breadth also helps it compete against the African sections of giant media sites: iTunes has an African music collection, but that alone is not going to replace Jamati.

3. Brand like your life depends on it. If your venture strikes gold, giant corporations will come sniffing around. Guaranteed. So long before that happens, develop a strong identity and personality, because your brand is what will command consumer loyalty in the face of heavy competition. A strong brand will also command a higher price should you decide to sell your company.

A great example is Daily Candy. Founded in 2000, Daily Candy is a combination newsletter and website that covers fashion, food and other lifestyle trends. All of its daily articles are archived online to attract that long tail action. And while there are numerous fashion and trend-watching sites — some run by well-established magazine brands — Daily Candy created a distinctive look and attitude, resulting in a large, loyal audience. Rather than try to compete against Daily Candy, media giant Comcast bought it for $125 million — proof that having a strong brand can turn a potential competitor into the best business buddy you’ve ever had.

So, yes, there is money — sometimes fat juicy nine-figure money — to be made, but an entrepreneur needs to do much more than acquire some content and lease servers to host it. Making money in the long tail requires creativity and strategy that sometimes go far beyond your personal interests.

It also takes patience: it took 3 years before Daily Candy found its first big investor, and another 5 before Comcast came along. The demands and patience required for long-tail success could make the most intrepid entrepreneur miss the old days when all you needed to start a record store was a small business loan, a passion for music and some grumpy buddies to man the registers.

Related Article: “Viral” Does Not Mean “Free”: The Reality Behind The Buzz