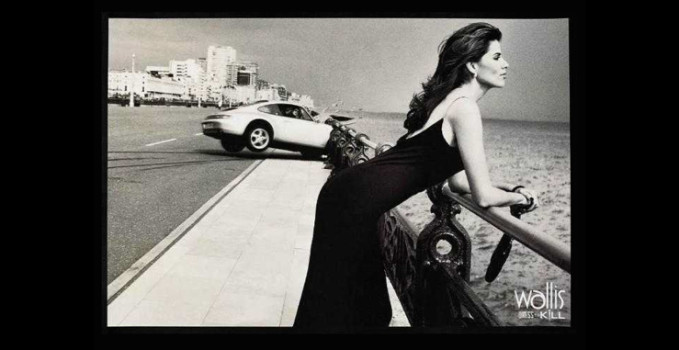 Looks That Kill: Fashion Ads That Go Beyond the Call of Beauty

You see them in every fashion magazine: Preternaturally gorgeous young models squeezed into sadistically form-clinging outfits that require three assistants, an elf, and a can of WD-40 just to get into. And after the shoot, the model needs four hours in a hypobaric chamber just to decompress.

This 2007 ad from fashion brand Wallis is like that. Only different…

While other ads have their models splayed in contortionist poses with brooding expressions that would make a “Twilight” actor envious, there’s not much else going on. Maybe there’s a prop. Sometimes there’s a male companion ripped from the cover of a Harlequin Romance and instructed to “act straight” for the duration of the shoot.

This ad actually tells a story. Make that four stories. The models are still preternaturally gorgeous and wearing outfits tighter than the skin on an obese python. But the grainy B&W images evoke stills from French New Wave cinema, and most of the men look like actual guys you’d see in a barber shop or conducting a train.

These ads make you stop. They make you smile. If you’re a guy, they make you think, hmmm, maybe I’ll take my wife fashion shopping for once. If you’re female, well, I can only guess that some women will view these ads and think that, hmmm, this will get me the attention I’m seeking.

In a fashion magazine — which can contain hundreds of nearly identical ads — those are results to kill for.