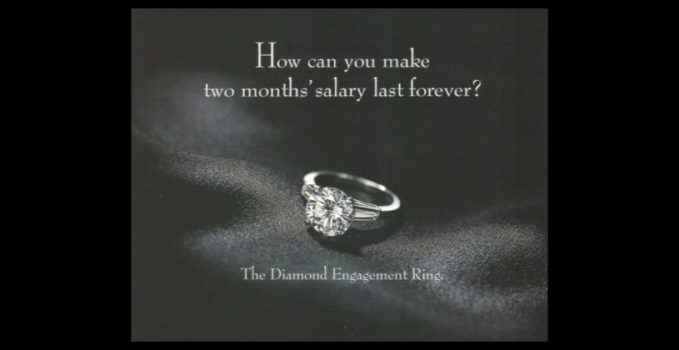 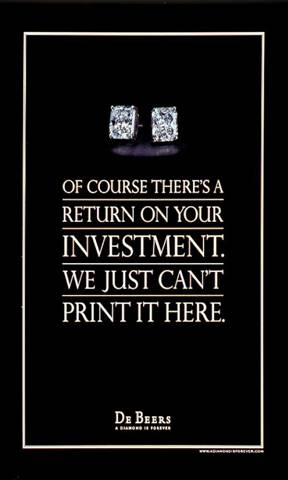 People ask me whether marketing truly works. Sure, marketers claim they made Nike and Apple and BMW rich and popular — but didn’t these companies become rich and popular simply because they had great products?

In response, I first explain what marketing really means. It’s not just advertising and sales; indeed, creating “great products” is a large part of the equation.

But theories and definitions are far less persuasive than actual proof. As the cliché goes, “Show, don’t just tell.” So I point out 3 examples of marketing creating massive demand for products that otherwise have little value:

1. I received my settlement in the class action suit against De Beers, the company that cornered the global diamond industry and used its monopoly power to jack up prices worldwide. I had to submit a receipt for some jewelry I bought, and five years later I received a check for (drum roll please)… $46.39! Woohoo! I can now afford to fill my car with gas.

(BTW, I’m not the only one riffing on their settlement – The Consumerist wrote an amusing report on the great American diamond settlement.)

2. Business Insider published an article about diamond valuation by Rohin Dahr, which included these priceless nuggets:

The article is based on a longer exposé on diamonds and De Beers by The Atlantic. As Dahr explains, De Beers hired adman Gerald M. Lauck of the agency N.W. Ayer to create value and demand where little existed. In 1938, Lauck launched a brilliant integrated marketing campaign (back then, it was all just considered advertising) that featured influencers, including the British Royal Family. Did it work?

You know the answer.

In the midst of the Great Depression, diamond sales surged 55%. (And as Dahr notes, not because diamonds are a good investment – they’re quite the opposite.)

Since then, diamonds have become a fixture of American culture…

The Many Facets of Human Desire…

Now I’m not knocking shiny rocks — no more than I would knock other high-priced purchases that deliver no value other than sensory pleasure and status. That could be a $400 bottle of Dom Perignon, a Rolls Royce, an original Picasso, a rare comic book, an LV purse, courtside tickets at a Lakers game, or a first-class trip to Tahiti.

The market offers many shiny pretty objects that make us covet and crave, and spend hard-earned bucks just to look at them, taste them, hear them, smell them, and show the world that we own them. The basic desire for objects that delight us goes far back before De Beers and advertising and even humanity. Animals of many species also prize shiny objects.

I just admire the skill of marketers who can turn the ordinary into the extraordinary, and the “Diamonds Are Forever” campaign by N.W. Ayer is a classic example.

Now it’s sad when people who can’t afford such products feel pressured to pursue them. And it’s completely detestable that some of these products lead to human and environmental destruction. Lots of products come with a price not reflected in what we pay.

Just note that diamonds aren’t alone in this department.

Plus, There’s Always An Alternative…

If you find diamonds unaffordable or reprehensible, the market offers many alternatives. I once saw a sign outside a flower shop that read:

“Diamonds are forever…
So buy her something that dies.”