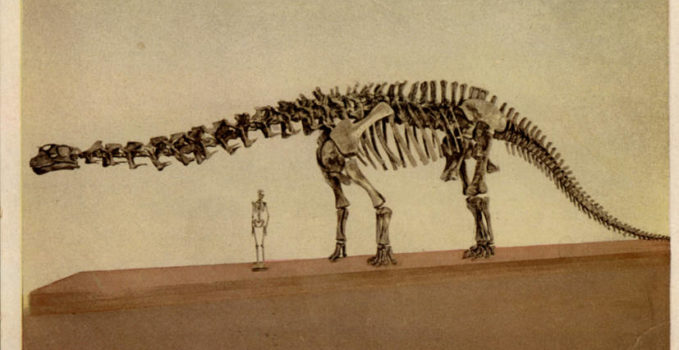 Hey there mighty brontosaurus
Don’t you have a lesson for us
You thought your rule would always last
There were no lessons in your past…
— The Police, “Walking In Your Footsteps”

If you unfold the business pages and vultures start circling overhead, you know times are tough. And if you start seeing visions of the Grim Reaper, you know you’re reading a Tribune Company newspaper.

While we can blame the economy for business struggles, recessions also present a ripe opportunity for reassessment. Kind of like cardiac arrest makes you reassess whether chicken-fried bacon with cream gravy is the most sensible bedtime snack

One classic perspective on reassessing a struggling business — or an entire industry — is “Marketing Myopia.” Written by the late great marketing guru Ted Levitt in 1960, “Marketing Myopia” accuses failing industries of defining themselves too narrowly, which renders them incapable of adapting to changing markets:

“The history of every dead and dying ‘growth’ industry shows a self-deceiving cycle of bountiful expansion and undetected decay.”

Levitt was also a colorful writer. Yes, you can write about business and do it with style.

Levitt cited the railroads as a classic example. Once the titans of American industry, railroads defined themselves as being in the business of moving people and products by train. Consequently, when their customers came to prefer airplanes and highways, the railroads couldn’t adapt and went from being titans to dwarves. Had they defined themselves as being in the “transportation business,” they could have followed their customers to new opportunities.

A recent example is the music industry. Humans have made music for at least 4,000 years, but the era when sounds came encased in plastic (or wax or vinyl) covers just over 100 years on that timeline, and the CD encompasses only about a fourth of that. But the music industry clung tenaciously to the concept of music as a packaged good, and devoted energy and dollars to compel consumers to buy CD’s. It even went so far as to sue its fans rather than adapt to their changing habits.

While I defend every artist the right to demand payment for their work, siccing packs of lawyers on your fans is not a customer-loyalty strategy I’d recommend.

From a Levitt perspective, the music industry should have taken this opportunity to redefine itself far beyond mere songs. Once the Internet blew their distribution oligopoly apart, the major record labels should have redefined themselves as marketing companies with expertise in building and promoting music brands. These brands go by such names as “Taylor Swift” or “Metallica” or “The London Philharmonic” (to name a few), and music labels should have focused on helping those brands generate revenue streams from multiple sources, such as concerts, merchandise, and commercial licensing (called 360-degree deals). Instead, they acted like the future would still come encased in plastic.

I Know You’re Sick Of Hearing About Apple, But…

It took another company outside the music industry to drag the brontosauruses (brontosauri?) into the 21st century. Now, my regular readers know I can’t write a post without including Apple or Steve Jobs. (It’s an addiction, I know, and I may seek a support group for it.) But in the case of “Marketing Myopia,” Apple really applies.

As a pure computer company in the 90s, Apple found itself circling the drain, so it turned to what many companies resort to when they run out of ideas: “best practices.” Seeing that Microsoft had become an empire — albeit an evil one — by licensing out its operating system, Apple did the same, and the results nearly killed the company. Apple’s computer sales plunged and — adding insult to injury — rival Michael Dell suggested that Apple should shut down and “give the money back to the shareholders.”

So as soon as Lord Jobs regained the Apple throne, he canceled those licensing agreements. He then oversaw product redesigns and a new distribution channel (Apple stores). Most significantly, in 2001, Jobs redefined Apple as the center of a digital universe, and that year, the iPod was born. In 2007, Apple dropped “Computer” from its name. Jobs successfully pulled off a full Levitt.

Meanwhile, according to the NY Times (“Dell Trails Its Rivals in the Worst of Times”), Michael Dell “has grown tired of discussing his company’s reinvention.” In 2008, Dell corporation’s shares sunk to an 11-year low and a market cap of $22.7 billion compared to Apple’s $79.3 billion.

Other examples of companies that have avoided “Marketing Myopia” include Disney and Nike, who long ago redefined themselves beyond their original products.

Of course, redefining yourself too broadly also has hazards. In 1999, Starbucks redefined itself as a lifestyle brand after some successful experiments in music, so it strayed into movies with two box office flops, “Akeelah and the Bee” and “Arctic Tale.” As Starbucks discovered at great expense, impulsively buying a CD with a latte is a far different consumer activity than going to a movie because a coffee shop hypes it. Instead of defining itself as a lifestyle, Starbucks should have expanded on its success as a “third place” — a regular destination beyond school/work and home.

(Of course, Hollywood is a brutal place to venture for practically any corporation. Coca-Cola and Matsushita both plunged into the movie business headfirst only to leap out screaming when they found it full of piranhas and leeches. The one outsider who excelled in Hollywood was, um, Steve Jobs with his Pixar acquisition.)

Black and White and Nearly Dead All Over

Let’s close with a brief look at another dying industry: the aforementioned newspapers. The newspaper industry has been losing readers and advertisers at “terrifying” rates. Management responded by cutting costs, but that entailed cutting pages and editorial staff, which only turned off more readers and accelerated the decline. While the newspapers wisely redefined themselves beyond ink-and-paper and ventured onto the Web, online revenue is but a fraction of what the newspapers make with print.

So I say, why stop redefining there?

With CNN and the other cable news networks eschewing real journalism for celebrity-mongering, sensationalism, and punditry, I’d love to see a Los Angeles Times channel. Sure, print journalists aren’t always camera friendly, but L.A. is full of these people we call “actors” who can fluidly recite what other people write. Yes, that’s a lot of risk, but with flocks of slavering vultures closing in and the Grim Reaper crying for more cowbell, it’s the perfect time to redefine.