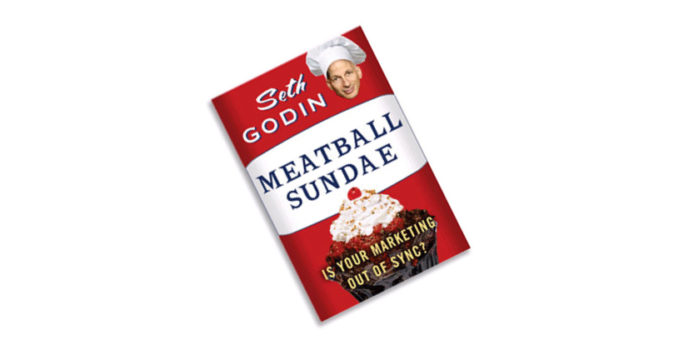 Seth Godin’s book Meatball Sundae lives up to its name: it’s a big mess. I won’t fully review an old publication here, but the following two paragraphs made me want to hurl the book against the wall (or just hurl). On pages 68-69, Godin writes about the superiority of “permission marketing” versus “interruption marketing”:

“Pets.com used every tactic they could find — TV ads, sock puppets, and accelerated e-mail marketing with a veil of permission. They blew through a hundred million dollars by interrupting people who didn’t want to hear from them. They failed.

Dailycandy.com did the opposite. The daily e-mail newsletter has hundreds of thousands of subscribers to their fresh e-mail newsletters on style. They are extremely profitable and growing every day. They used no TV, no puppets, and a very calm and patient approach to permission marketing.”

Comparing Pets.com to Dailycandy.com is like comparing Home Depot to MTV. The two businesses don’t even have .com in common: the official name of the newsletter company is DailyCandy.

Pets.com failed NOT because people didn’t want to hear their marketing. In fact, viewers LOVED the Pets.com sock puppet so much they bought copies of it. The puppet appeared on Nightline, Good Morning America, and the pages of People magazine, and the Pets.com Super Bowl ad ranked #1 on USA Today‘s Ad Meter. Had Pets.com been a media property, it might have succeeded.

The reason Pets.com failed was its business model. For example, it offered free shipping on 20-pound bags of cat litter that it sold below cost (Pets.com sold most of their products for 1/3 their cost). In addition, Pets.com played the stock market game, necessitating a massive awareness-building campaign, and the ensuing dotcom-bubble burst took down all its financing.

Conversely, DailyCandy doesn’t buy, sell or ship anything. It started as a freakin’ newsletter — an excellent newsletter, but its logistical challenges involved how to find parking near trendy fashion boutiques. DailyCandy was also not a publicly traded company. It sold first to private investors excited about the huge mailing list of fashionistas, before being swallowed whole by a voracious Comcast. Had DailyCandy been a stand-alone stock during the dotcom boom, its investors would have demanded ads next to spots by E-Trade, Outpost.com, and Pets.com. As for DailyCandy being “extremely profitable,” I’d love to see those numbers, since the company made money primarily from investors and recently had to shut down in 7 cities.

Seth Godin has a basic grasp of marketing and an inexplicably large, lucrative brand, and he excels in creating catchy metaphors, but his lazy, unsubstantiated observations could get a business in hot water — or at least a shallow and tepid bowl of meatball sundae.

If You Dig That Post, You’ll Dig These, Too: