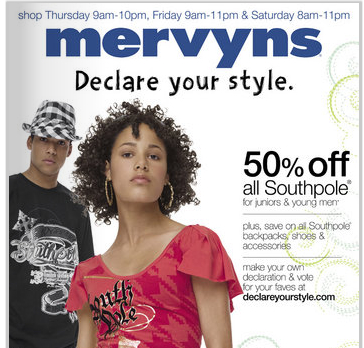 Bankruptcy is the Fashion? Mervyns Fails to Declare its Style

As an L.A. interactive-media guy, I’m expected to blog about sexy new developments online or in Hollywood, but today I’m writing about Mervyns department store. And, yes, that’s the only time you’ll ever see the words “sexy” and “Mervyns” in the same sentence.

Ah, I see I just lost 98% of this article’s readers, which reflects the same percentage of consumers who couldn’t care less about the fashion retailer. And that explains why Mervyns recently declared bankruptcy. Since the economy’s been Bushed again, it’s easy to point fingers at macroeconomic issues, and that’s exactly what Mervyns’ management is doing: In filing for Chapter 11, Mervyns chief exec blamed the “state of the economy and difficult operating environment for our industry.”

Sorry, but Mervyns started sucking the wind out of shoppers long before the economy turned south. So why has it sucked so much?

Have you been inside a Mervyns lately?

While Mervyns carries Levi’s, Nike, and many of the same brands found in happening retailers, the ambiance couldn’t be less inspiring: cheap lighting, unimaginative displays — only Sears’ attempt to be the Jiffy Lube of fashion retail is less inviting. It doesn’t appear that Mervyns has hired an interior designer since the ’80s, when Montgomery Ward’s was a retail leader. Note to Mervyns: Montgomery Ward’s bit the dust in 2001. Basic lesson: learn from the failures of your competitors.

Basic lesson 2: learn from the successes of your competitors, particularly if one of them is your former parent company.

Even though the Mervyns’ prices are low — the store is in a perpetual clearance sale — the retailer is still losing customers to Target and Wal-Mart. In terms of sheer volume and efficiencies alone, Mervyns can’t compete on price with those giants. By trying to do so, Mervyns is simply giving up profits and devaluing its brand.

So that’s where we find Mervyns: nowhere.

In marketing, we call this impotency a “positioning failure.” A position is where a brand stands in relation to its competitors, as perceived by consumers. Mervyns can’t compete on price or fashion, so it’s stranded in a nether zone between the retail hell that is K-Mart/Sears and the trendy-discount nirvana that is Target /Forever 21.

What should Mervyns do?

When you try to be something to everyone, you usually wind up being nothing to anyone, as Mervyns is learning the hard way. They’ve tried to target moms, teens, men, Latinos, suburbanites… Having too many targets dilutes your identity and your marketing budget.

Rather, Mervyns should identify a valuable consumer segment that’s being underserved and go all-out in trying to satisfy their needs to the exclusion of everyone else. That’s right: success often means kissing other consumer groups goodbye.

So in fashion, forget the youth market: teens and twentysomethings are over-served by everyone from Abercrombie to Aeropostale to American Apparel, etc., etc., etc. One “Declare Your Style” campaign isn’t going to propel you to OMG status. The competition in that segment is hyper-intense and far more edgy than thou (as demonstrated by the live topless male models standing at the entry of some Abercrombie stores).

And don’t even think of trying to appeal to the wealthy: Mervyns could spend years and tens of millions of dollars on advertising and never be mentioned in the same breath as a Neiman Marcus or even an Armani Exchange.

So who’s being underserved? Based on my cursory observations at The Grove shopping center in L.A., I noticed thirtysomething moms lingering on the periphery of a Forever 21 while their teen daughters eagerly plunged into the brightly lit, multi-colored fray. (And, yes, when you’re my age, you tend to notice the moms.) Occasionally, one of those moms wandered through the racks and glanced at a few items, but then retreated to her position as Keeper of the Credit Card. So I’m guessing there’s this segment of young moms and thirtysomething women who would love an affordable brand of stylish clothing that they can wear to work or out on the town that’s less stiff and expensive than Banana Republic, but more sophisticated than Target. I see boutiques serving this niche, but nothing at a retail chain level. Just a thought…

Mervyns encourages consumers to declare their style, but the entire company itself has needed a head-to-toe makeover for 20 years. Not keeping up with aesthetic preferences in an aesthetics-driven industry is a recipe for bankruptcy. I’m surprised it took this long.

Once a company identifies its target consumer segment, it needs to create a unique, distinctive image that appeals to that segment. Note that “unique” need not mean over-the-top bizarre: it can result from a confluence of influences. For example, what kind of music does the segment listen to? What kind of ambiance invites them to select a particular coffee shop? What magazines do they read, and what is distinctive about the graphic design in those magazines? What TV shows do they watch, and what is distinctive about the tone and style of those shows?

Once you acquire that information, hand it over to a professional marketing agency with a reputation for creativity. Don’t try to do it yourself! Company executives should no more try to rebrand themselves than they should try to give themselves haircuts. Their lack of objectivity, and their MBA-cultivated obsession with spreadsheets, will likely cause them to miss the creative hotspot.

Finally, once that style is “declared,” it needs to be integrated everywhere, not just in the ads. The entire operation, from the corporate logo to the music playing over the intercom to the atmosphere in the dressing rooms, needs to reflect this style.

Looks aren’t everything, even in the fashion industry. A brand also needs a voice, particularly in this era of tech-powered social interaction. The ideal is to pick brand ambassadors who are members of the target consumer segment.

Now, some marketing consultants will tell you that the only “authentic” brand spokespeople are the company’s owners or top executives. My view? Unless your CEO is as charismatic and media savvy as a Steve Jobs, keep him or her out of the picture. You’re better off with a professional actor or even a talking gecko. For example, the last ambassador a fashion brand targeting women needs is an old guy in a suit.

That doesn’t mean ush out and hire a celebrity. They’re expensive and need to be strategically selected and handled (a topic for another blog). Sarah Jessica Parker, for all her box office success and appeal, wasn’t the best choice for The Gap’s twentysomething demographic. No one believed she actually would wear Gap clothing out in public with her thirtysomething and fortysomething peers.

Rather, hire professional writers and spokesmodels from your target segment to serve as bloggers and social network reps for your brand. Don’t be covert: if you venture onto Facebook, it’s better to have your brand ambassadors openly state their ties — isn’t that the point? — than to pretend to be a “friend” with an ulterior motive. Deceptive “guerilla” marketing simply sets you up for a backlash (see my blog post, Are You For Real Monica Rockle? A Facebook Marketing Case Study).

Rather, hire people whose personalities reflect the brand identity you wish to establish, then have them interact directly with consumers. Along with a segment focus and a makeover, a few choice brand ambassadors could help Mervyns shed its stodgy image.

Note that this is a quickie solution confined by the limits of this blog. (And I’m not getting paid for it.) A comprehensive marketing plan, based on thorough consumer and competitive analyses, is necessary.

The point is, when your company gets into some hot water — or some deep, murky, quicksand — don’t blame the economy. Many companies in every industry are still making money. Rather, use failure as a cue to undertake some no-holds-barred, full frontal self-reflection. And if you’re Mervyns, some better lighting might help you see what’s going on.

Update 10/3/8: Forever 21 just put in a bid for 150 Mervyns stores. Who knew that the opposites I mentioned in this article would attract? Says Christopher Lee, Sr. VP of Forever 21, “Our vision has always been to get a bigger box.” Nothing is certain yet, but the best bet is that Forever 21 will convert many of those Mervyns and put the rest out of their misery.