A long time ago, in an Internets far far away, the people were promised a galaxy free of corporate-empire dominance, where the little guy would have a fair and equal shot at being heard, where small businesses could claim riches once envisioned only by multinationals, and where unsung individuals would finally be sung. The playing fields would all be level, and there would be many goals to shoot at…

But in episode 1.0, the hurdles were still forbidding, with even the simplest website requiring arcane knowledge or at least the cash to hire a talented bounty hunter/coder. This, of course, favored the same old giant corporations who went by such names as Time-Warner and AOL and, sometimes, poorly conceived unions between the two.

Then came the promise of episode 2.0. The alliance of rebels and finance wizards (dubbed “VC’s”) generated all new platforms that gave the little guy a true shot at exposure — free. Free was Good. The people cheered and began to flock to these “social media.” And everyone who met on these platforms instantly called each other “friend.”

But in free market tradition, some platforms quickly degenerated into hives of scum and villainy. From the deepest, darkest reaches of cyberspace came cabals of spammers with their mechanized armies of spambots, lurking trolls who cursed everything and claimed to be “first” on every comment board, and envoys — both secret and official — of the corporate empires who tried to blend in with the masses and claim these platforms as their own.

And as the corporate envoys discovered, the VC’s behind these “user-driven” platforms were venally open to propositions of collusion and bribery called “sponsorship” and outright “acquisitions.” Communications between the two were frequently intercepted by rebel bloggers, like “How much for a featured spot on your homepage?” and “That’s some valuable real estate — how much you want?” along with such secret codes as CPM, CPC, ROI and WTF.

Even more nefarious, one platform founder tried to claim all the user content on his site as his own to do with as he wanted forever and ever and ever even if the users tried to escape his world by deleting their accounts. “All your contents are belong to us!” he LOL’d quietly in his Terms Of Service (a T.O.S. that proved to be a P.O.S.). And he would have succeeded, too, had he not been exposed by some meddling kids and sent to his room without dinner.

To combat the dangerous liaisons and power grabs, as well as fend off spammers and trolls, the little guys looked to each other and decided to form alliances of their own. In order to make it as individuals, they surmised, they needed to come together. Leaders were anointed — sometimes by their friends, sometimes by themselves — and they quickly set out to form the largest networks they could, because even here in virtual reality, size did matter.

For while the playing fields were still touted as level, some players had teams. Really big teams. With no salary caps.

As it came to be, many Internets users who once sneered at fraternities and sororities (often because they weren’t invited to the reindeer games) now formed brotherhoods and sisterhoods of their own with their own hazing rituals called “site etiquette.” It soon became clear that mobs now ruled, and a once amicable noun had become a command: FRIEND ME!

Yes, members of these mobs were still called “friends” on most platforms, even though many of them had met but once at a conference or vaguely remembered each other from junior high. On LinkedIn they were called “Connections,” on YouTube “Subscribers,” and on Twitter they were most accurately dubbed “Followers.” Because followers they truly were, ready to do the bidding of their leaders in order to ensure individual success in a compromised universe.

On YouTube, esteemed cewebrities like the Great Nalts issued free tomes revealing secrets to success, and these secrets spoke much of “collaborations.” Where a sole YouTuber could once procure fame armed with little more than a webcam and a confession, it now took tens of thousands of views to become popular, and still no one — not even the cewebrities — could crack the secret code to getting on the homepage. The natives also no longer discussed (even in hushed tones) the pretty young girl who achieved fame and stole many a young geek’s heart by claiming to be lonely, since it was revealed that she was but the fabrication of some Hollywood filmmakers.

On Digg, where double-digit votes once sufficed to be made popular and appear on the coveted front page, the task now required triple- or even quadrulple-digits and a politically leftward tilt. Would quintuple-digits and a lifetime MoveOn.org membership soon be mandatory for minimum exposure?

On Reddit, newcomers (not so affectionately called “noobs”) could not figure out how the hell to get a single vote. The natives of this secret society spoke of “karma” and winked suggestively, but they responded not to emails seeking wisdom.

And in the land of Twitter, the people competed feverishly for followers, avidly tweeting and following each other’s tweets until they did nothing but, resulting in real-world work going undone, houseplants going unwatered, and children going “what’s up with Mom and Dad?”

Any individual too unpopular — or too occupied with real life — to form a personal mob was soon besieged by snake oil salesmen and consultants who came crawling from the virtual woodwork, boasting of their magical ability to make something go viral by using the mystic intonations of “word of mouth” (sometimes cutely referred to as “word of mouse”). “For you and some coin, we shall create buzz,” they hissed. Oddly, in order to market their magical powers, many of these word-of-mouth experts resorted to paid advertising.

In addition, free itself began to disappear, as VC’s started to clamor for something called a “revenue model” and “the need to monetize our user bases” — which echoed the last gasps of 1.0. The corporations heard and smiled, for the Internets and its barbarian hordes had sacked and depleted their once mighty traditional-media empires, and now the time had come to strike back.

Would this be how the New Media Promise ended, with as much chaos and bias as traditional media and markets? Would the famed jedi, Obama-won-Alreadi, be our only Hope? Or would something new come along to blow this planet-sized machine to smoking smithereens — something truly individualized and free and not requiring an upgrade or a long-term contract with massive early-termination fees…

Or maybe we’ll get a prequel.

In the meantime, maybe we all should just turn off the computers and go outside for a walk. Who knows — this substance called “fresh air” could be a good thing. 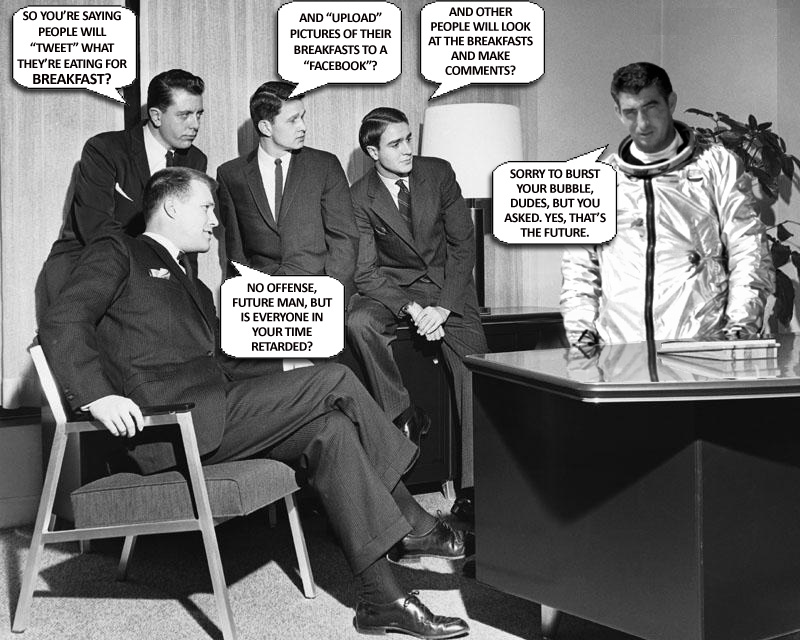 Related Article: Lemons 2.0: If Everything Were Run Like a Dotcom