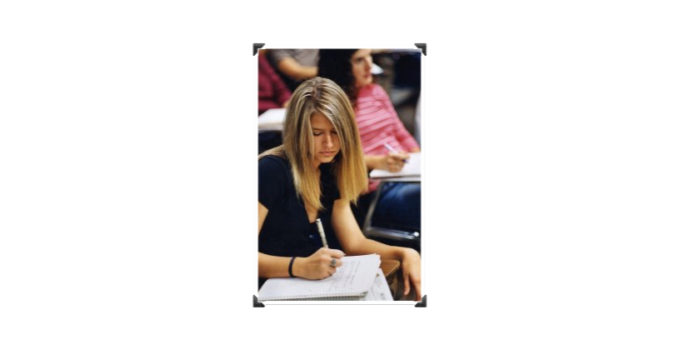 Are You For Real, Monica Rockle? A Facebook Marketing Case Study

I got an invite to your “Psychology Marketing Project” on Facebook. (Note: Facebook has since removed this “Project.” Too bad.) And as someone who professionally conducts and teaches marketing I have to hand it to you: pretty damn clever. First of all, it’s written just like a college student would write it — no whiff of advertising copywriter here:

I’m doing a paper in my Human Behaviors – The Psychology of Marketing class. The paper is about the marketing world and the changes that have taken place in the last 5 years. One of the main points that I’m trying to make is how influential viral marketing can be. One individual with an average facebook account can reach (screw it) 400,000+ people in less than 10 days just by making a group and inviting people. There have been other experiments where this worked, my paper talks about the likelihood that it can be duplicated.

What you need to do to help me is:

The experiment begins now!!(Friday March 14th 4:45 PM PST). The paper is due when I get back from spring break on March 31st!!

Thank you to everyone in advance!!!

It includes smileys and typos and triple exclamation points. How very coed. And so far, this “student group” of yours appears to be working: as of March 22, 2008, you have 383,082 members. Nice! Rarely do any promotions on Facebook generate this kind of following, least of all, compel people to spam their friends.

Now I love supporting the future marketers of the world, and if you were one of my students, I would give you an “A” for creating awareness. The problem: only real people can take my marketing class, and I’m not quite convinced that you’re, well, real.

First of all, your “contact info” is a link to a Café Press store for La La Land Shirts. I guess you could be a junior entrepreneur trying to sell T-shirts to finance your college education. But that’s not the only suspicious feature.

You do link to your Facebook profile, which includes a stock-photo-caliber picture of you studying (nice of you to let the US Census Bureau distribute your photo free of charge), your hobbies (“I like hanging out with my friends, playing basketball, school, having some fun on the interent.” [sic]), and other personal details.

But where, exactly, do you go to school? Most students on Facebook proudly flaunt their school affiliation. Plus, it makes networking much easier. Since your profile puts you at age 28, I assume you’re in grad school and have several schools in your background. If you truly are an aspiring marketer, tap into those alumni networks as soon as possible!

And, by the way, when will you post more photos to your profile? Most young people on Facebook post hundreds of photos of themselves and their friends. I do, however, see more images of T-shirts from La La Land, which seems to specialize in politically themed merchandise.

Speaking of politics, I’m a little confused about your orientation. You claim to be a Democrat, but you also joined clubs supporting Mitt Romney and Ron Paul for president. Indeed, you’ve joined 207 clubs on Facebook — but not a single one about marketing or business. Kind of odd for a graduate marketing student…

But maybe I’m too harsh. If you’re a real person, I apologize. Just confirm that you’re legit and I’ll retract this entire article. Since you can’t email in fear of having your Facebook account deleted, why don’t we meet up? I see we’re both in Los Angeles, so why don’t you pick a Starbucks where I can interview you about your marketing project? (Though if you’re in L.A., why is the top location for your friends Toronto, with your next most friend-intensive cities London, Australia, Alberta…?) You should really get to know more people in Southern California. I can introduce you to some great ones.

I also tried Googling you, but for a 28-year-old marketer, you’ve left hardly any trail on the Internet. I found some arcane post about you being a plagiarist — which maybe isn’t so arcane.

But honestly, Monica, if it turns out that you’re just an employee of La La Land T-shirts, that your real name is Akash and you’re a 33-year-old Canadian who hasn’t left his apartment in three years, that’s even better. ‘Cause this really is a killer piece of viral marketing you got going. Hell, you’ve racked up nearly 400,000 converts on Facebook in just over a week! Most companies never attract that many followers their entire time on Facebook, despite running banners and contests. You also added a face to your company — a young attractive single female face at that. How very Lonelygirl15 of you! Persona-driven marketing is so Web 2.0! Just let me know how many T-shirts you’ve sold through this campaign so I can complete my case study.

I look forward to hearing from you, Monica Rockle — but I won’t hold my breath.

PS: Thanks to Jen R of Busan, South Korea for finding the source of your photo on the U.S. Government Census website!

Update 3/26/2008: Reader Doug Cone did a little detective work and found this lalalandshirts profile on my.barackobama.com (see clipping below). The author, James McMinn Jr., claims to work in advertising and design, and suggests “engaging crowds with flash mobs and pr stunts.” So if it’s you, James, behind this Monica Rockle sensation, then, seriously, high-five on the brilliant crowd work! You’re good at this. Really good. Forget T-shirts: you could be making serious money selling your hype skills in Silicon Valley or Hollywood… 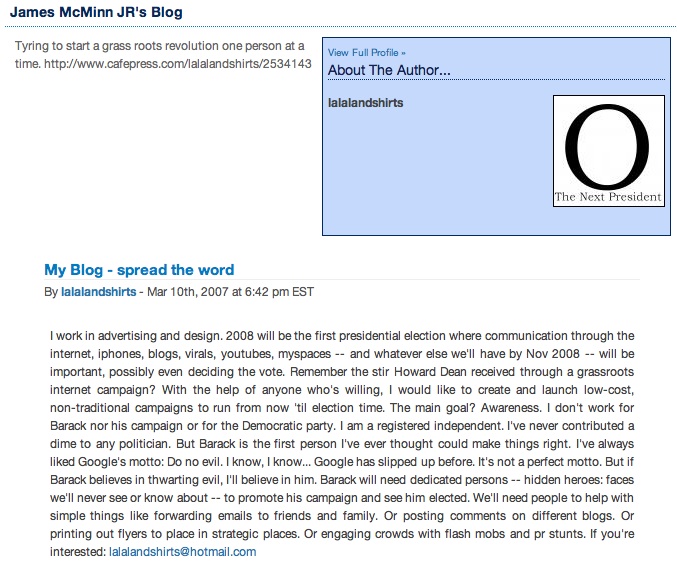 Updated 4/4/8: I took a look at the my.barackobama.com address today, and the name in the upper left hand corner was changed to you know who. 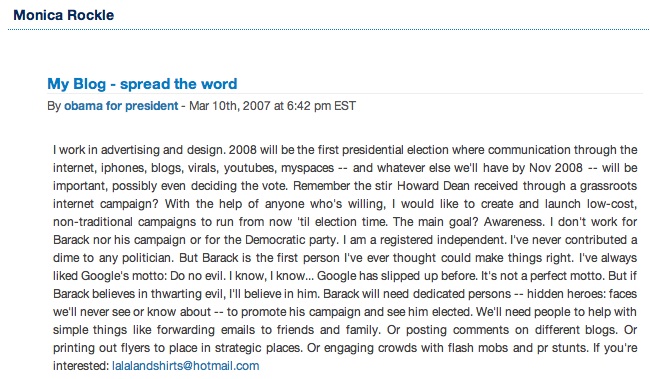 Note: James is following this blog, so he has changed it once again since this post.

Update 6/14/8: The project is back as a “six degrees experiment” by a “Monica Cook.” Gotta hand it to James for perseverance — one of the key elements of successful marketing.

For more on this story: