What Color is Your Bunny? Feature Creep and New Media Marketing 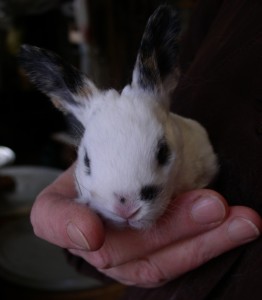 True story: A man walks by a pet store and sees rabbits for sale. He tells the clerk that he’ll take one, and she asks him what color he’d like. The man responds, “I don’t think the snake cares”…

I know, I know, not the most heartwarming Easter story ever told. (If it’s any consolation, the clerk refused to sell a rabbit to the man, who replied, “Snake’s gotta eat, too.”) The reason I’m blogging it is that, in classic business literature fashion, any unusual story can be warped into a business lesson. (Seth Godin has made millions doing it, so why not play along?)

And here’s your lesson du jour: The snake is the consumer. (Stay with me now.) And all he wants is lunch — just something to tide him over for a couple of weeks. Yet here comes some know-it-all (the clerk) foisting upon him some features he couldn’t care less about.

As consumers, we’ve all experienced this feature creep: products with capabilities we don’t need or even want…

In her highly insightful and engaging book, Different: Escaping the Competitive Herd, Harvard Professor YoungMe Moon describes this mad proliferation of features — what she calls “augmentation-by-addition” — as a sign of creative failure. Rather than being truly innovative, companies just cram feature after feature into a product, since piling on commoditized features doesn’t take a lot of money or skill or imagination.

Such feature creep makes brands indistinguishable, so, as Moon notes, consumers stop caring about brands at all. Think about the low-end of the computer market: Toshiba, Lenovo, HP, Compaq, Dell, Asus, Acer, Whatever. “What does it matter,” says the snake. “They’re all the same anyway, so give me a deal.” The end result: companies start competing on the basis of price instead of brand in a disastrous race to the bottom.

This trend of imposing unwanted features on consumers is not limited to retail products.

Take Facebook’s timeline, for example. When did people start demanding to know their friends on a chronological basis? It’s even more nonsensical when it comes to business pages. How often do consumers want a year-by-year history of the brands they buy?

In fact, let’s take a step back and point out something that should upset all new-media marketers: most consumers don’t want interactivity in advertising. Video games? Of course they want interactivity. Ads? Not so much. In fact, way less than not so much. The Ad Contrarian points this out in a vicious but oh-so-true rant, “Interactivity: Get Over It”:

“Every experiment with interactive TV (ITV) has been a disaster. Click-through rates on banner ads are below 1 in a thousand. Engagement rates on Facebook are below 1/2 of 1%. It turns out that people on line react to ads the same way people off line react to them — mostly they ignore them. And when they do bother to read them, they overwhelmingly do not interact with them… In the digital world, people are passionate about interacting with each other — not brands, not ads, not you, not me. Get over it.”

And don’t get me started on how much people use QR Codes.

What’s this all mean? It’s simple: we marketers need to think twice – even thrice —  before hopping on every tech trend that comes out of the chute. Want to play with something new because it excites y-o-u? By all means, go play. You might get lucky, just as you would with a roulette wheel. Want to use new tech because it excites consumers? Yeah, well hold on there, Buck Rogers, and determine whether your target customers are truly excited, or whether they just want something to tide them over a couple of weeks.

The snake doesn’t care – but he’s hungry. What are you going to do about it?