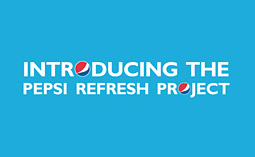 So Pepsi is skipping the Super Bowl, ending a 23-year run of entertaining ads. Contrary to what the social media cultists would like to believe, Pepsi is not doing so because it prefers social media. (As much as I use social media — including this here blog — I find its cheerleaders to be about as endearing as televangelists on crack.) Indeed, Pepsi will be heavily plugging another of its products, Doritos, so it’s hardly abandoning the game.

Rather, for its flagship brand, Pepsi is launching a $20 million campaign to “refresh” American communities. Super Bowl ads just didn’t fit the concept. Writes Advertising Age (subscription required), “the concern is that glitzy Pepsi spots would not bolster the image of the brand as one that encourages healing, growth and improvement…”

Wait — did they really just say healing, growth and improvement?

I love all those attributes — they make for a great antibacterial ointment. And, yes, they’re also great for differentiating a brand. (The competition would certainly have a hard time tearing them apart.) But, uh, we’re still talking caffeinated sugar water here, right? Healing, growth and improvement might make sense as brand attributes for, say, a bicycle company or a pair of fair-trade 100% organic shade-grown cotton thermal underwear. But for soda? Pepsi’s old standbys of humor and celebrities make much more sense.

I suppose ardent soda drinkers could make this new communal vibe a reason to pick Pepsi over Coke. And maybe this campaign will make current Pepsi fans more jazzed about their choice. But in the long run — and most of brand building is over the long run — I’m not certain that Americans will come to see Pepsi as a mighty force for good in the world. Seriously: Pepsi as a source of healing?

Back To School For You…

True, anything that pumps $20 million into cash-strapped communities is nothing to sneer at. But considering that the budget deficit for L.A. public schools alone is $500 million, that 20 mil will probably evaporate faster than spilled soda on a hot sidewalk.

Indeed, to close that deficit, L.A. is now eviscerating its arts education programs: “Half of the district’s 355 elementary arts and music teaching positions are set to be cut next year — and halved again by 2012.”

Considering that so much of America’s competitiveness now relies on creativity — whether it’s making movies, designing computers, or putting all that social media technology to some practical use — cutting educational arts programs seems economically and culturally suicidal.

I hope Pepsi picks up that note and takes it even further — perhaps starting a long-term fund for arts and music education. Then, in my Technicolor 3D fantasy, I see corporations and voters across America coming to the realization that investing millions of dollars into the arts is as attractive and potentially rewarding as plunking it all down for a football game…

Oops, sorry, I got high on the healing, growth and improvement trip there, daddio, and forgot what country I’m living in. I know, having American corporations support arts and education is a lot to hope for. But if Pepsi truly wants to refresh the community, and truly have that become the foundation of its brand, then it needs to up the ante. A $20 million charity campaign is immensely better than a token commercial, but it’s also just a start. I’m sure Pepsi’s masterful marketers know that — after all, they did build a trillion-dollar empire based on sugar water.

But let’s suppose Pepsi isn’t willing to up the ante, and all the healing stops after the $20 million is slurped up. Well then, hey, Coca-Cola, whatcha doing after the Super Bowl?

Update 11/01/10: After a whoppin’ 1-year hiatus, Pepsi is returning to the Super Bowl. According to a Pepsi exec quoted in AdAge, “The predominant use of social media and narrow-casting tactics missed the masses — and Pepsi is about as mass as a brand can be. So the key learning for us was that in addition to having a cultural idea that taps into a mass sensibility, you need to make sure that your idea is getting enough exposure to be successful.” The moral of the story here: social media alone just doesn’t cut it.