Public Relations 101: How (Not) To Write A Press Release 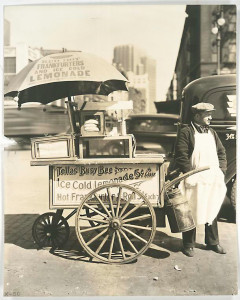 After hours with no sales, Max realizes, “What I need is a press release…”

It’s amazing the difference between what you learn in school and actual business practices. I once took a class in public relations where we learned how to write a press release. The basic rule: write an actual news story about your company using standard journalistic practices to make it as objective as possible. That way, the news editor can make a few adjustments and print it as is.

Even companies I admire, like Apple, spew out press releases written by 12-year-old grads of the Fox News School of Journalistic Integrity, only less sophisticated. Since then, I’ve read hundreds of releases by companies of all sizes from around the world, and I’ve discerned the true rules of writing a 21st century corporate press release. So as an Atomic Tango public service, I’m presenting them to you here distilled into eight easy steps:

1. Present yourself as the leader that you are. Forget objectivity — that’s for wusses — YOU RULE, and don’t hesitate to tell the world. Regardless of which industry you’re in, or how successful you are, or even if you just launched your company last week, you are a “leading provider” of whatever. So always begin your press releases by trumpeting your leadership status. For example, let’s say you just started operating a hot dog cart in downtown L.A. Here’s how you start every press release: “Big Ass Haute Dogs, a leading provider of protein supplements in Southern California…” Think I’m kidding? I recently thumbed through a Consumer Electronics Show exhibitors directory, and every other company was a self-described “leader.” I felt privileged to be wandering amidst this pantheon of gadget-and-gizmo gods.

2. Glorify your industry. You’ll notice that I didn’t describe Big Ass Haute Dogs as a “leading provider of tubular meat byproducts in a bun.” That’s too honest. In press releases, hype is normal and not the exception. If you can’t bring yourself to exaggerate, get out of public relations and become a dental hygienist. Now, if you prefer, you can opt to describe your industry so narrowly that you’re the only member of it and, hence, its automatic leader. Example: “Big Ass Haute Dogs is the leading provider of grilled pig parts for $3.95 on the corner of 7th and Broadway in downtown Los Angeles on weekdays from 9 am to 5 pm as sold by a short hairy guy wearing a tattered South Carolina Gamecocks baseball cap.”

3. Portray “announcing” as the most exciting activity ever. It doesn’t matter whether your company is hiring a new janitor or perpetrating a hostile takeover of Microsoft. The key verb is “announce.” That’s what the story is always about — announcing. And that’s what every American yearns to read about — announcing. Germans and Japanese do things, Americans announce. Better yet, we’re always “proud to announce,” ’cause nothing fills us with more pride than the act of announcing. So now your press release reads, “Big Ass Haute Dogs, a leading provider of protein supplements in Southern California, is proud to announce that relish is now provided free of charge.” If we were proper journalists, then “provide” would be the verb, as in “Big Ass Haute Dogs now provides free relish.” But this is public relations, dammit, and announcing is what we do best. Proudly, of course.

4. Force your CEO to talk like a zombie droid. Now provide a dull and unprintable quotation by your CEO (or other top exec). This waxes your CEO’s ego, and an ego that size should not be presented in public unless it’s totally waxed. This also guarantees that he doesn’t replace you with his 12-year-old nephew who just graduated from the Fox News School of Journalistic Integrity. The ratio of B.S. to actual substance in the quotation should be 100 to 0. Note: it’s OK to repeat the word “proud,” because American companies can never be proud enough. It makes their shareholders think they’ve actually invested in something worthwhile. Finally, the quote should not sound like anything a real person would actually say. Example: “Relish has long been important to the vast majority of our customers, and our customers have long been vastly important to us, consequently we’re proud to be providing a vast level of importance to everybody,” said Big Ass CEO Max Johnson. Never use an actual quote; to justify making $16 million per year, your CEO must sound like he just swallowed and regurgitated an IRS manual.

5. Stroke other executives. To guarantee your continuous employment, don’t just quote your CEO. Throw in a couple of other senior execs as well. Because after a company car, a cute secretary, backdated stock options, and a week-long intensive industry conference in Barbados, there’s nothing senior execs value more than seeing their names in print. Example: Big Ass Marketing VP Ivana Dong added, “Our studies show that condiments are the new black.”

6. Close with a massive pat of your own back. Nothing wraps up a release better than a subjective summary of your company’s greatness. Example: “Based in downtown Los Angeles since mid-2010, Big Ass Haute Dogs makes the absolute best hot dogs in human history, and the culinary gods wet themselves whenever they hear the name Big Ass.” This is called “the boilerplate statement” because it appears in all of your corporate communications and it makes real journalists boil. Yes, the news editor may break into convulsive sobs as he reads your self-glorifying drivel posing as a press release, but he has no choice but to write a story about you if he hopes that your company will keep advertising in his publication.

7. Don’t forget to take out an ad in that publication. Your check for ad placement makes even the most massive, steaming heap of verbal excess smell like a rose.

8. Finally, write a headline. Avoid the temptation to write your headline first. This is your piece de resistance — so save it until you’re ready to summarize everything into a Frankenstein-esque monstrosity nearly as long as the press release itself, complete with subheads and sub-subheads. In the spirit of complete PR lack of objectivity, it should read something like this:

“Because Our Customers Are Important — Vastly So,” Emphasizes CEO Max Johnson

And that’s something they definitely don’t teach you in school.