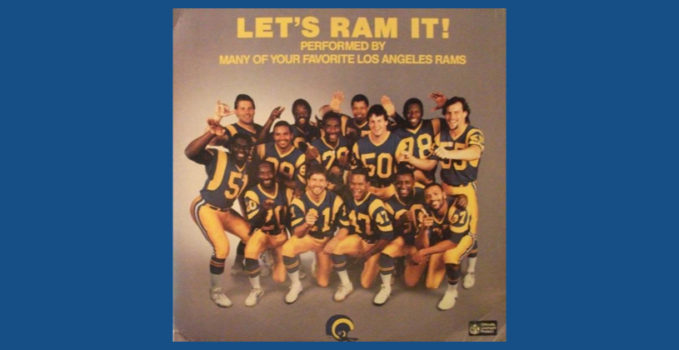 Do marketing plans come from factory assembly lines these days? The advice is so generic and commodified, someone on AliExpress must be selling it for 40-cents a piece as long as you buy 100 of them.

Take this article about marketing the L.A. Rams NFL franchise. It contains two words that would make most experienced marketers groan in weariness:

Those two words were a running gag in my Marketing Strategy course. If my students wanted to trigger a reaction from me, they would wink and say, “Our marketing plan consists of using social media to target Millennials.”

Given that analysts have declared social media a waste of time for most marketers, and that we’re starting to see the first Millennial grandparents, the S&M strategy sounds dated and lazy.

But there it was in the L.A. Times: some “expert” on Millennials advising the Rams, “They need to tell their story in social media… not in broadcast media.”

Shall we explore why? Huddle up!

1. Yes, Millennials use a lot of social media; they’re also watching a lot of TV.

Who do these experts think is watching the CW and other youth-oriented programming? How much of “The Walking Dead” or “Supergirl” audiences consist of senior citizens?

While the devices younger generations use to watch the shows may differ — some prefer their phones and computers over television — they’re still watching the shows. Indeed, they’re binge watching them. And there’s plenty of opportunity to advertise during or around streaming shows.

It’s also a matter of economics. If young people live in a household that can afford cable, they’re watching broadcast TV. (Who prefers to watch on their phone instead of the 48-inch set with surround sound?) And as more young people get better paying jobs, or they get to the age where staying home is preferable to going out, they’ll subscribe to pay TV.

And above all, if they’re football fans, they’re obviously watching TV. A few NFL games will be available online this season, but most games can only be watched on broadcast or cable. If someone can’t or won’t watch TV at all, and simply lives and breathes social media, why even bother marketing to them? (And don’t say “selling tickets to games” — see my next point.)

Social media does have a role to play in creating content that’s shareable and easily consumed on phones without busting data caps, but it should be part of a campaign using multiple media. And yes, that includes television… and radio… and the backs of food trucks that we Los Angelenos can’t help but stare at while stuck in the parking lots we ironically call “traffic.”

2. Marketers need to factor in the price of the product in developing an outreach strategy.

Obvious, but too many don’t bother. Think of how desperately Scion tried to sell new cars to young people (fyi, Scion no longer exists).

Going to an NFL game is no jaunt to the beach. The tickets start at nearly $100 for the cheap seats (“I think those are players over there…”). Throw in parking and some overpriced concessions, and you’re talking about a day going into high 3-figures.

If a young person has the money to potentially afford that experience, he probably owns a television AND is paying for cable. So why not advertise on broadcast? After all, if you’re selling an expensive product to rich people, use expensive media and don’t bother targeting customers who can’t afford your product. The Rams could throw thousands of dollars into social media (and let’s dispel once and for all the falsehood that social media is “free”), yet only reach people who can’t or won’t buy cable, least of all tickets to a game.

If a young person doesn’t have the money to afford Rams tickets, but still wants to go, they’ll likely need their parents to take them. Keep in mind that the generation with the highest spending power right now is Gen X, so if you want young people as customers, market to their parents as well. That may require a slightly different message — emphasizing a family experience and comfy seats, perhaps — but go where the money is.

3. Pssst — there’s a college across the street.

The so-called Millennial expert works at the University of Southern California, which just happens to be across the street from the L.A. Coliseum where the Rams are currently playing. So if the team wants to reach Millennials in Los Angeles, forget social media — just go for a walk.

OK, we’ll let him off the hook on one technicality: most undergraduate students are not Millennials — they’re Gen Z.

Wait, what — not all young people are Millennials?! Yeah, the lazy S&M marketers seem to forget that. That’s why using the M-word to refer to young people makes any marketer sound dated. In fact, on the USC campus, it’s only the grad students and some of the youngest professors who are Millennials.

At some point, marketers will stop lumping all people in a demographic into the same behavioral/lifestyle set. At least I hope so.

In the meantime, if the Rams want to reach thousands of young people who share at least one lifestyle feature — they’re all students at the same university — they can hit them within a football’s throw of the Coliseum.

USC currently has an enrollment of 44,000 students, many of them football fans thanks to the USC Trojans team that was semi-jokingly referred to as L.A.’s pro team before the Rams moved back.

College campuses are also hives of communication, where tight concentrations of students spread word quickly, mostly face-to-face (90% of word of mouth occurs offline) and through their digital devices. They also come from all over the world, so targeting USC means spreading the word back to their friends and family.

And by the way, USC also has some of the top communications and entertainment programs and students in the world, including its own student-run TV station. (Damn those young people — not only watching TV, but creating it. Perhaps they should tell some of the experts on campus.)

So how to reach this concentration of networked young people? Advertise during USC football games through physical and digital signage, booths at the tailgate and on campus, and in the game programs and student media. In addition, target influential students (fraternity/sorority heads, student government leaders, student journalists) and stage special events just for students.

4. Leverage the fact that all of of the current Rams players are Millennials. Or Gen Z.

As the L.A. Times article acknowledges, the players are the same age as the target fans, ranging from 21 to 31. And young people like to follow others in the same age range, with some notable exceptions (Bernie! Bernie!).

More importantly, these Rams players happen to be influencers.

Influencer marketing is now surging as marketers discovered it’s a lot easier to get noticed online if you use someone who’s already popular. These players are ideal influencers: they are entertainment stars with superhero physiques and high-income lifestyles who are living their passions. Many also overcame serious challenges growing up and breaking into a highly competitive sport, which means they have compelling and inspiring stories to tell. (A critical part of brand building.)

NOW we can talk some social media, because in addition to great stories, each of these players has a real social following, including fans from college and high school, current Rams fans, and journalists covering the team. So when they tweet or post a video, more people will see it — and care about it — than anything most social media interns will ever share.

To reach young people, the Rams should take the helmets off their players and show them in all possible media, digital and traditional… Which they’re doing right now on HBO’s “Hard Knocks.” (Yes, cable television. Do young people watch HBO? Ask how many of them know the meaning of the word “khaleesi” — particularly here in L.A.)

By the way, marketing sports by focusing on the personalities and stories of players is absolutely nothing new. In 1994, I worked on a campaign for the NFL on Fox through Seiniger Advertising. The strategy was to “show the guys behind the masks” in order to attract younger viewers. We didn’t have social media back then — the players needed the coverage and the publicity generated for them — yet that was considered the right strategy.

It’s the right strategy today, too.

The Rams also knew this and did this decades ago. Knowing that most young people like music, they created a music video called “Let’s Ram It!” OK, well, maybe that wasn’t a great idea, either.

There’s nothing wrong with wanting new generations of customers — they’re vital for keeping brands alive in decades to come.

The flaw is lumping them together and assuming they all share identical interests and habits. We can ascribe a few commonalities — more energy, perhaps, but likely less money than older people, while also generally being more experimental with technology and lifestyles — but there are likely greater differences between them.

Even at USC, consider the 250-pound Trojans linebacker learning to crush opposing quarterbacks, and a young woman in the medical school learning to put those quarterbacks back together. They might both become Rams fans, but for different reasons.

The linebacker doesn’t need any marketing to know about the Rams. As an aspiring NFL professional, he will try to connect with the team any way he can. The Rams should work through the USC coaches to facilitate that connection properly.

The medical student may need more incentive. Since she and her friends are not already pro football fans, she won’t see a single thing about the Rams on social media (even if it’s a paid ad, she’ll likely ignore it). Instead, perhaps her medical school has a guest lecture from the Rams doctors, with potential internships.

That said, not even the Rams can customize marketing for every target customer, but having a few different campaigns beats just pounding out one message and hoping it connects, particularly in L.A., one of the most diverse markets in the world.

Whether on the football field or in the marketspace, success requires both hard work and creativity. And that hasn’t changed in generations.