They Cried More, More, More: Getting Current Customers To Eat Up

My wife just paid off her car two years early, and she’s ecstatic about it. Getting the new car was fun; but shedding that debt felt even better. It’s like getting to eat an entire package of freshly baked Trader Joe’s Snickerdoodle cookies in one sitting and losing all the weight the next day.

Yet within weeks of making her final payment, my wife received a letter from VW: “Due to unprecedented demand, we are currently in need of several select pre-owned 2006 Volkswagen vehicles to satisfy current customer requests.” Gee, who knew that the people were clamoring for used Volkswagens in the middle of a recession? The letter proceeded to invite her to trade in her car for “an excellent opportunity to get into a new vehicle with little or no money down and with a lease or finance plan sure to fit your budget.”

My wife, being completely awesome, instantly tore that letter in half and tossed it into our recycling bin. Of course, that meant I had to go bin diving to retrieve the pieces so I could write this post. Oh, what I’ll do in the name of blogging…

Now, as a marketing guy who’s written a few direct mail pieces, I found the pitch interesting. The duplicity I could do without: Sorry, VW, I drive by your local dealership frequently and I’ve yet to see a mob queuing up for used Beetles as if they were kogi tacos. Indeed, at times there’s about as much action at that dealership as at a Rod Blagojevich for President committee meeting.

But I don’t fault VW for trying to get good customers to buy another car from them. That’s smart marketing. In tough times when the market isn’t growing organically you could try to steal market share from your competitors, but that only works if they’re weak and can’t fight back (“General Motors, come out and plaaaaaaay”). Or you could sell more to your current customers:

So what’s the problem?

For the past 20 years, the electronics industry has been absolutely brilliant at getting consumers to replace perfectly good expensive products. Every year, they come out with a new model that has more megapixels, a thinner profile, higher definition, more memory, a touch screen, a smaller screen, a bigger screen, a screen so big that the neighbors across the street can enjoy what you’re watching without having to squint.

When I was growing up, my family’s television was a massive piece of junk. It was one of those behemoths built mostly of wood with fake-drawer handles and a screen that required sitting no further than three feet away to see the details. (“Which one of those running dots is the quarterback?”) We had to turn on the TV twenty minutes before we wanted to watch something so it could warm up; consequently, we wound up just leaving the thing on all day. And every few minutes the image would flicker, so we’d have to fix it the old fashioned way, with a good ol’ whack upside the head. But we didn’t replace it until we moved.

Today, most middle-class families would put that sad excuse for technology on the side of the road and head off to Best Buy with a credit card hot and ready to do its deed. And I certainly don’t miss those crappy-TV days with any tinge of nostalgia whatsoever. Indeed, I wish I had that television now. And a sledge hammer. It just amazes me that, within my lifetime, big-ticket items have gone from being something you put up with as long as possible to something that you replace even when it’s perfectly functional.

Of course, that partially explains part of our economic mess now, since consumers are now trained to run up debt in order to have the latest greatest big-ticket items in their possession at all times.

I’m not immune to this urge. I’m a regular Engadget reader with hardcore technolust. And though my three-year-old Macbook is working perfectly fine, I’m itching to replace it with one of those new LED-lit fully loaded 17-inch models that cost as much as a used Volkswagen. If the economy were any better…

Stop, Freddy, stop and ask WWYAWD (what would your awesome wife do)? That’s right. Back out of the Apple Store, that den of temptation so lurid and luring it makes a Nevada cathouse look like a nunnery. Open your wallet and count the green stuff inside. No, the lucky two-dollar bill doesn’t count. Got $3000 in there? No? Then go home and keep blogging…

An Appetite For Destruction

Anyone who’s seen the entertaining and somewhat revolting 2004 documentary, “Super Size Me” knows that Americans have a self-control problem. Consumption is the national pastime.

In “Super Size Me,” documentarian Morgan Spurlock explored how McDonald’s got consumers to eat more than what was good for them. At the time he made this film, McDonald’s actively encouraged customers to “super size” their meals with more fries and soda for a few more cents. Of course, those few cents were pure profit, since fries and soda cost McDonald’s almost nothing. After Spurlock’s film came out, McDonald’s ended “super sizing,” though denied doing so because of the film. 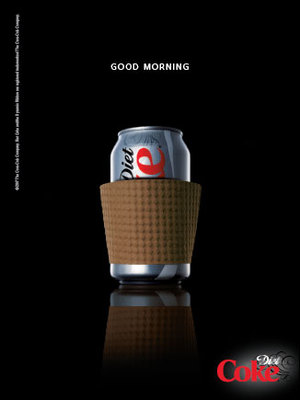 Meanwhile, Americans are drinking bigger and bigger sodas (something Spurlock also addresses). Did you know that 7-Eleven now offers a “Double Gulp” that contains 64 ounces of soda? 64 ounces! Who’s even got a bladder that big? But what’s the soda industry to do when facing generally flat sales? (No pun intended.) To increase consumption, two years ago, Coca-Cola actually launched a brief campaign promoting Diet Coke as a breakfast drink.

But it’s not just the junk food companies. We’re seeing cries for increased consumption all around: Talk for more minutes. You loved it in theaters — now own the DVD. New phone every two years. It’s a new season of fashion. 265+ digital channels, including 30 premium movie channels. Enough memory to hold 30,000 songs…

Seriously — an MP3 player for 30,000 songs? Assuming an average of 3 minutes per song, that’s two months worth of continuous music in your pocket. That makes getting a new car every 3 years sound sensible.

How much is enough?

In general, we’re a country that’s already in too much debt — from the individual level all the way up to the federal government — to be buying more while we’re still paying off our past purchases. On an even larger level, there’s the whole issue of whether the planet can support greater consumption and more disposable products.

Perhaps it’s encouraging that, because of the recession, consumers are cutting back, making their possessions last longer and generally just saying “no.” Perhaps it’s an opportunity for a truly fundamental change in the way our economy works.

Then again, McDonald’s sales are actually increasing during these tough times.

Ideally, companies should be encouraging people not to buy more, but to buy better: upgrade to a higher quality car with more safety features and zero emissions, or upgrade your meal from deep-fried carbs and sugar water to something that’s healthier and tastes great. Growth would then come in the form of higher profits instead of more frequent sales. It would also spur more innovation in product development.

But that’s hard work. It’s a lot easier to appeal to the gut instead of the mind.

Some companies are taking the higher road now: Apple, Patagonia, and Tesla, to name a few. Of course, some of them are also guilty of encouraging over-consumption (I got that 30,000-song figure from an iPod ad). But I would love to get a letter from Apple right now begging me to trade in my used Macbook “to satisfy current customer requests” (no waste there) with a special offer on a new Mac. Such a letter would make perfect sense to me.

I’d just have to hide it from my wife.