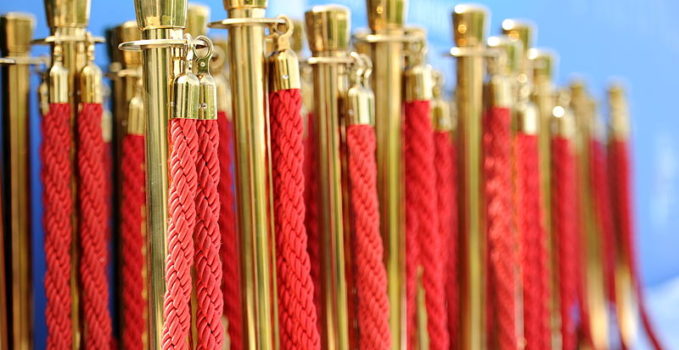 String Up the Velvet Ropes! Why Social Networks Need Barriers

L.A. contains miles of velvet ropes that pack more protective power than the Great Wall of China. They’re fronted by large scowling men armed with high-caliber clipboards. And they’re assaulted nightly by swarms of wannabes, who are repelled by blatant acts of discrimination based strictly on looks. Whenever I spot one of these social maladies in effect, my nerd self-preservation instinct kicks in, and I automatically steer clear. I’d sooner go bird hunting with Dick Cheney then submit myself to the velvet-rope treatment.

But what I disdain in real life is something I entirely endorse online: the social networks need to start guarding their entries.

The Web 2.0 services have focused entirely on growth, growth, and while you’re at it, how about a little more growth? While this led to reams of publicity and ridiculous valuations, it also resulted in massive costs in servers and customer service.

Even worse, the sheer size and reach of these networks attracts slithering armies of spammers, scammers, and mindless brain-eating MLM morons. You know, the kind of human detritus who’d ruin any party scene, and who should be kept out on the sidewalk — preferably beyond smelling distance.

Facebook once limited its membership to Harvard students only. Then they extended to alumni. Then to anyone with a .edu address. And then, what the hell, to everyone with a pulse. That was commendably magnanimous and admirably egalitarian. Or maybe just wickedly greedy. Either way, at that moment, the spam onslaught began.

I used to belong to a number of business groups on Facebook, but the wall-postings and discussions devolved into get-rich-quick hype-a-thons. Some group admins quickly delete such tripe, but most Facebook business groups consist of nothing but posts like this:

“I’ve got a school project that’s a survey about my cousin in Nigeria who needs help getting all the money he made on Forex out of his country and needs you to visit his website because once he reaches 1,000,000 members he can give you a special cash advance at extremely low rates that you can use to work at home for just 3 hours a day finding special deals on foreclosed properties that can be purchased using federal stimulus bailout checks and sold to new immigrants looking for fresh network-marketing opportunities and the best part is that it’s all entirely free free free 2.0! What do you say?”

The spammers and scammers are now figuring out Twitter.

Users logging onto their accounts see that they’ve attracted followers overnight. “Woohoo! I’m popular!” Unfortunately, the boost to their ego quickly deflates after they discover that some of these “followers” are just hucksters — and possibly not even human.

Add the sponsored tweets and you’ve got a lot of Twitterers selling, not socializing. Beyond irritating legit users, these self-promoters increase the burden on the servers and cause potential investors to question the network’s true number of “members.”

The solution? Pull out your clipboards — it’s doorman time.

No, I’m not saying social networks should discriminate on the basis of physical appearance. Let’s leave that to the trendy clubs and Fox News.

The solution is simpler and less controversial: Facebook and Twitter are businesses, so they should discriminate on the value of a potential customer. How will they determine that value? Easy: by asking users to pay to join.

GASP! Did I just blaspheme the fundamental basis of all Web 2.0 companies? Absolutely. After all, the “free” model has proven to be a disaster for most startups. (See my post, “Free” Market Freefall: The End of Free?)

I’m also not suggesting an exorbitant amount. Perhaps $10-$20 a year — about the price of a magazine subscription. If that still sounds prohibitive, the company could then rebate some or all of that payment in the form of a gift certificate to a promotional partner, like Amazon. (Facebook could eventually offer credit on its payment platform for app developers.)

That should deter many of the spammers and scammers from opening multiple accounts. Sure, some would still cough up the cash for the opportunity to waste everyone’s time, but their numbers would be greatly reduced, and the social network could then use the income to better police itself.

Will a membership fee scare off some legitimate users? No doubt. But these social networks are already so massive, they could afford a little thinning of the herd. It would also alleviate the burden on their servers while generating revenue. The remaining membership would be more attractive to advertisers because — OMG! — these people actually have money and are willing to spend it.

Finally, there’s one other reason I think screening users is a good idea…

Twitter is now offering Verified Accounts to celebrities and politicians, who are being impersonated by con artists and pranksters.  If that works, I wouldn’t be surprised to see that service extended to all potential members… for a fee.

I envision more exclusive social networks popping up, where users can friend and follow others in a select market segment only. For example, picture a women-only network, or one just for doctors. While we all hate to be discriminated against, many of us also like being admitted to exclusive company, whether it’s a trendy club, a prestigious university, or the Supreme Court.

Related Article: Mob Rules: The Legend of How Web 2.0 got 2.Owned