Just read an article by Brant Cooper entitled “Is social media worth your marketing dollars?” Most of the advice is fairly standard and could apply just as well to non-social media. But what made me say “hmmm” is Cooper’s definition of market segments:

“Market segments are comprised of like people, who share a common interest, who look to one another as a trusted reference and who have access to each other. If customer in California is just the same as a customer in New York, but they have no means to communicate, they are in separate segments.”

Now that makes uncommon sense — if your marketing goal is to go viral. 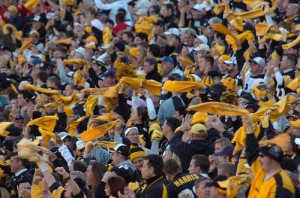 Now THAT is a segment. (photo by Steel City Hobbies via Creative Commons)

Up to this point, every definition of “market segment” I’ve ever read emphasizes common characteristics and accessibility, resulting in verticals such as “immigrants,” “college students” and “Steelers fans.” And, yes, you can certainly market to those groups.

What Cooper argues — and I agree — is that a potentially more rewarding segment is one that’s internally connected. In that light, Steelers fans make a great segment because they’re often chatting away on related forums. So if you have something relevant to pitch, like a magazine of Steelers news, your message has the potential to spread among them.

Immigrants, on the other hand, are too broad of a segment, despite their numbers and clear needs. While many immigrants obviously communicate with each other, the segment as a whole is not interconnected, particularly in social media. Sending your message to a Korean immigrant in L.A. is not likely to result in it virally reaching a Russian immigrant in New York.

What this means for the marketer in the social media era is one more checkbox: In addition to asking the key segmentation questions — is this segment distinctive, accessible, measurable and profitable? — you now have to ask if it’s interconnected. If it’s not, you’ll probably have to use traditional mass media, like a TV commercial, to hopefully hit as many target customers as possible.

And for all the people calling themselves social media experts — and there are millions more of them every day — spending money on a TV ad would be a sin worse than (gasp) not having a Twitter account.

Related Article: Divide and Conquer: Segment Your Market without Pissing Anyone Off