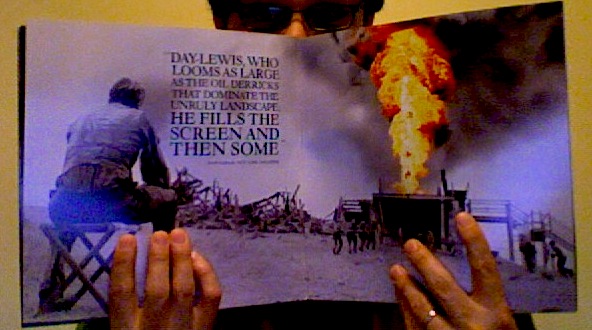 There Will Be Hypocrisy — And Dead Trees: It Must Be Oscar Time

Behold: a glossy oversized 12-page dead-wood booklet promoting the movie There Will Be Blood. This lustrous piece of eye-candy fell out of my L.A. Times, nearly crushing my toe. The heavyweight pages flaunted full-spread images from the lusciously shot film, along with quotes from critics, its Academy Award nominations and… nothing else.

I don’t deny that this film deserves promotion. I’m thrilled to see Daniel Day Lewis in action, and ecstatic that Hollywood still makes films that aren’t commercials for a video game or comic book. My issue here: There Will Be Blood angrily portrays the oil industry — replete with the greed, corruption, and destruction that gushed from it — then levels a small forest to promote it.

Now that the Commies no longer keep red-blooded Americans quivering awake at night, Hollywood’s new villains are ideal for the Bush error: oil industry execs. Watch the brilliant flick Syriana to get the full Left Coast scoop on petrol politics.

Now, as a magazine and book junkie, I embrace printed work that has value. (This, of course, rules out anything written by Ann Coulter, Bill O’Reilly, or OJ Simpson.) And I would have loved a mini, collectible booklet on There Will Be Blood containing cast and crew bios, a look at Upton Sinclair’s original novel, the history behind the film, some making-of stories, and other bonus features. We L.A. Times readers just might’ve kept it.

But this print-job offered nothing more than hype, so it’s immediately destined for landfills. (If you think Los Angelenos recycle, you should see the overflowing dumpsters in my liberal West L.A. neighborhood.)

I understand that every studio with a marketing budget must crank out booklets and tchotchkes for awards season. Such waste is usually contractually obligated, and it usually only hits a few hundred journalists, academy voters, and other industry players.

This here “Blood” booklet appeared in the Los Angeles Times. We’re talking circulation 800,000 here. That’s 4.8 million heavyweight sheets of paper, 10″ x 21″ each, printed, folded, stapled, and shipped. And I didn’t see any post-consumer-recycled-paper-content info here. I’m guessing each booklet cost the studio around $10 each, plus the payment to the L.A. Times. Wouldn’t it have been cheaper and more productive just to give all the Times readers a free movie pass?

Miramax, the studio behind “Blood,” will say the expenditure generates publicity. They can cite this here blog as proof. (Hey, I bring at least three readers to the table.) Now if publicity justifies everything, then I say, c’mon Miramax, don’t be a wuss. Drill for oil in the middle of the White House lawn or at the Bush mansion in Kennebunkport, Maine. Now that’ll get you some publicity — and a lot more fans.