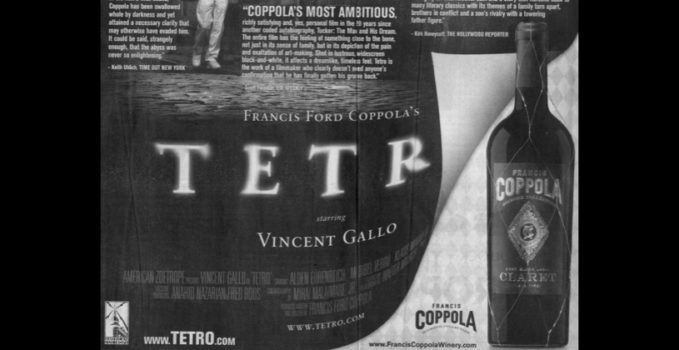 So I’m flipping through the Calendar section of the L.A. Times print edition. (Only in Hollywood is the entertainment section of the major newspaper called the “Calendar.” That’s right, we don’t do anything else in this town but entertain or be entertained.) My eye caught the full-page ad for new movie Tetro. The ad brims over with critical raves, with the first quote proclaiming “Francis Ford Coppola, 70, has returned to his roots…”

That must be referring to his grape-vine roots.

‘Cause it’s not the critical reviews that catch my eye here, particularly since the quotes consist of small white text printed on black — a brutally hard combo for the eyes, especially in newsprint, OK, designers? What catches my eye is the picture of a Coppola wine bottle — and I’m not talking a subtle, tasteful positioning. Rather, the movie portion of the ad is graphically “peeled away” to make room for the bottle, obscuring some of the cast-and-crew credits. (Ooh, someone’s credit just got obscured on purpose? There’s gonna be hell to pay in Tinseltown…)

In addition to the bottle, there’s a repeat of the logo and the URL for the Francis Coppola winery. The only thing missing is a line saying, “Hey you, Coppola financed this movie himself, so how about picking up a bottle or six to support him?”

Because the movie stars Vincent Gallo, maybe the wine people feared that the indie-film crowd would take the wrong cue and pair the flick with a nice glass of Gallo Sonoma Reserve Pinot Noir. Or maybe it’s because the actor Gallo (no relation to the wine family) endorses a brand of vodka…

Or perhaps the high cost of newspaper advertising made Coppola’s marketing gurus say, you know, maybe we should really leverage the hell out of this space.

But we’re not talking a Vince Vaughn movie here with a Budweiser endorsement. We’re talking Francis Freakin’ Coppola — the LEGEND — with a film positioned as a critical favorite. And here’s a blatant wine plug that dominates the ad, despite its relatively small size, and thus detracts from all the adulatory quotations about the film.

Indeed, if this ad hadn’t been in the Calendar section, I would’ve thought it was a clever wine promo featuring a faux movie.

Indie films and fine wine do go together. Unfortunately, this ad also throws in the cheese.