Bail Fail: The Wall Street Fiasco from a Marketing Perspective 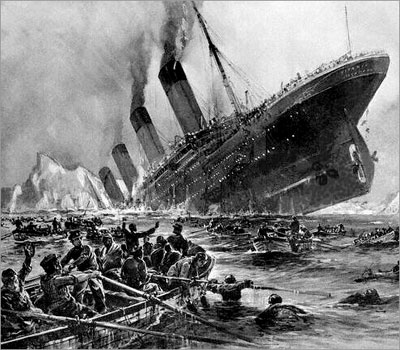 Row away! Row away!

Reflecting on Monday’s abject failure of the Wall Street Bailout bill, it would be totally remiss of me not to say it:

Could the marketing of that bill have sucked more?

First, there’s the nickname: “Wall Street Bailout.” Who came up with that and how was it allowed to stick around?

“Wall Street” has never engendered much sympathy from average Americans. Indeed, the opposite is true: we may invest our money there, but we’ve never liked it much. In the 1980s, just as Wall Street had finally reclaimed some post-Depression respectability, the movie Wall Street cast it as the dark lair of sleazy types with slicked back hair proclaiming “greed is good.” It’s been 21 years since Gordon Gekko uttered that line — wow I’m old — but the perception still resonates, boosted by the neo-fascist editorial page of the Wall Street Journal, obscene CEO compensation, and the criminal trials of such trolls as Dennis Kozlowski and Samuel Waksal.

(Update 4/29/9: Holy Sequel Hell, Batman, I just read on TechCrunch that Wall Street 2 is being made. Run for the hills!) 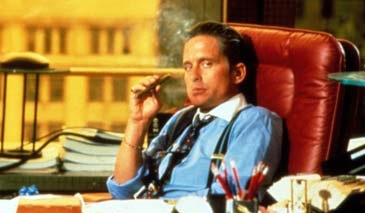 He needs your help.

Then there’s the term “bailout,” which conjures up images of people desperately trying to save a boat from sinking through hard sweaty muscle shredding work. That’s not exactly appealing. You mean I’ve got to risk a financial bicep tear and a monetary elbow fracture to bailout Gordon Gekko’s yacht? No wonder Bush & Co couldn’t sell the deal to Congressman Jethro from Podunkus.

I’m curious as to why the Bush White House Ministry of Propaganda & Double Untruths didn’t come up with something better? After all, this is the same administration that came up with the Orwellian “Patriot Act” and “Operation Iraqi Freedom” and “No Child Left Behind.” As much as I disagree with this administration’s policies (to put it lightly), they sure knew how to sell rotten eggs to the public. Did you know the official name of the Patriot Act is the “Uniting and Strengthening America by Providing Appropriate Tools Required to Intercept and Obstruct Terrorism Act of 2001”? Bush must have hired an entire ad agency and a dictionary editor to pull that acronym off.

Now, the official name of the bailout legislation is the “Emergency Economic Stabilization Plan,” which sounds important yet dull, and at 14 syllables, it’s more than Bush can say before suffering a lip cramp. It’s like calling the “Patriot Act” the “Emergency Civil Liberties Moderation Plan” — more accurate but not so catchy. In addition, EESP is a crappy acronym. What the hell is EESP?

Here’s a suggestion: How about calling this Plan the “Solvency Assurance and Viable Economy Restoration Act for Societal Salvation”? Yes, that’s wicked long, but the acronym spells SAVE-R-ASS. Memorable, no?

And where are the ads?

If the government is going to take over private businesses, it should start thinking like one, and any company that wants $700 billion from the public during a recession knows it needs to invest in some advertising. Microsoft alone is spending $300 million just to get us to like PC’s again. Seriously, there need to be some ads portraying graphic images of what would happen if the Plan isn’t passed…

Open on an outdoor wedding ceremony. A young couple kisses then turns to the camera. The perky bride says, “We would like a mortgage for our first house!” In response, a giant voice booms “NO!!!” and a humongous boulder is dropped on them… Cut to a young soldier back from the war, who turns to the camera and says, “I’ve served my country, and now I need a car loan!” In response, the giant voice booms “NO!!!” and a humongous boulder falls on him… Cut to a young woman who looks up from studying in the library and says, “I need a loan to afford college!” The giant voice booms “NO!!!” and the entire library caves in on her. A calm but serious voiceover then adds, “Don’t let the American dream go all to hell. Tell your Congressional rep to support SAVE-R-ASS now!”

Or something like that. (I really shouldn’t perpetrate ads after midnight…)

And then there was the whole McCain “here I am to save the day” pratfall, which made this intensely serious legislation look like a pathetic political stunt as well.

The EESP may still pass after some alterations, but it would have been a whole lot easier and faster if the Plan’s advocates had called in some professional marketers in the first place. Some YouTube videos and a Facebook Group entitled “One Million Strong For SAVE-R-ASS” later, and we could have had ourselves some economic stability. 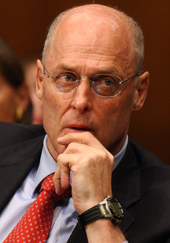 At the least, we wouldn’t have Henry “Lord of the Sith” Paulson as the Plan’s spokesperson anymore. Hello, central casting? Think we can replace Lurch with Rachael Ray?

Related Article: At Home with Hank: A Fairy Tale about Need and Perception