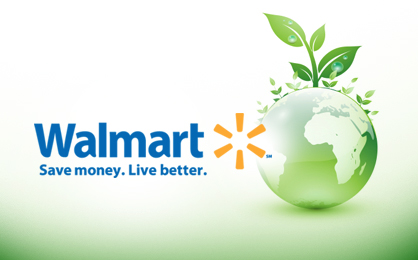 The Greenbox Effect: Walmart Changing Its Ways — Or Playing Divide And Conquer?

by Freddy Tran Nager, Founder of Atomic Tango + Not A Walmart Shopper…

“We live in a time when people are losing confidence in the ability of government to solve problems… Walmart does not wait for someone else to solve problems.”
– Walmart Stores CEO H. Lee Scott Jr.

I’m no fan of the big box behemoth. The list of Walmart misdeeds ranges from underpaying and underinsuring their employees, to driving mom-and-pop stores out of business, from ignoring the wishes of communities who don’t want the hideous boxes in their backyards, to generally being tacky and dull — just to name a few crimes against humanity. My POV is summed up by this acerbically funny Jib-Jab video:

Then something wonderful happened: Walmart hit a wall. They ran out of small towns to pave over, so they moved into big cities. And to their horror,  Walmart encountered scary alien beings like union organizers and leftist intellectuals. Not only did these aliens refuse to drink Walmart’s Kool-Aid, they had the gall to fight against them. The result: Walmart’s growth and stock price flatlined. And the negativity from Jib-Jabbers and documentarians and other pinkos kept intensifying, including Obama’s recent slam of Hillary for serving on Walmart’s board.

Meanwhile, Walmart’s rival Target chose the fashionable route and grew. True, Target perpetrates many of the same crimes as Walmart: it’s also a concrete-and-asphalt monstrosity, and its employees don’t exactly live the good life. But Target did hire Isaac Mizrahi and other name designers to spruce up its wares. Its commercials celebrate creativity, and its prices can even beat Walmart’s. For the image-conscious, Target became the acceptable substitute. Left-Coast yuppies don’t mind telling their friends they bought something from “Tar-zhay,” but won’t carry a Walmart shopping bag. Target’s profits and stock soared.

Seething with envy, Walmart tried to steal Target’s yup-scale profits. They assigned their ad agency GSD&M the unenviable task of repositioning Walmart as “fashionable.” The failed launch of their urban fashion brand Metro 7 resulted in GSD&M getting reviewed after years of loyal service. GSD&M decided to opt out of the review, but it wasn’t entirely the agency’s fault. Walmart forgot a couple of rules of marketing:

1. It’s consumers who determine your position. You can call yourself fashionable or upscale or hip or trendy all you want, but if the consumers don’t buy it, you’re just wasting your breath — and ad dollars.

2. Once you establish a position, changing it is very expensive and most likely impossible. Walmart spent decades promoting themselves as the no-frills everyday low prices Mecca, so no chance in hell could they become fashionable with just an ad campaign. To change that perception and their position, they would have to do something drastic.

Walmart went from green with envy over Target’s success to simply green. They began by making their stores more energy efficient and by selling compact fluorescent lightbulbs by the truckload, then trumpeting these moves through the media. That wasn’t exactly selfless. With fuel prices going through the big box roof, these tactics also lowered Walmart’s energy bills — and sold a lot of bulbs.

From a strategic perspective, the greening of Walmart did something even better: it divided the enemy.

Liberals and other big-box haters found themselves grudgingly applauding. “They’re still unacceptably anti-union,” you could hear the granola munchers saying. “But hey, they’re green so they can’t be all bad…” And all those moderate suburbanites and soccer moms who felt guilty about shopping at the evil empire exhaled in relief. Lo and behold, Walmart’s sales started to increase again.

Now, with a recession on the horizon (or, more likely, already here), it’s time to go for the kill.

On Wednesday, Walmart’s CEO announced a whole series of measures and policies “to cut the energy used by many of its products 25 percent, to force the chain’s suppliers to meet stricter ethical standards and to apply its legendary cost-cutting skills to help other companies deliver health care for their employees.” CEO Scott even suggested erecting windmills in Walmart parking lots!

This announcement should appall and confuse liberals, almost as badly as the sight of Hillary and Obama eviscerating each other with Republicans watching.

By going green, Walmart picked a strategy that mollifies some on the left while being politically neutral. Again, green energy makes sense economically in the long run, and it taps into the growing public concern over the greenhouse effect and America’s bellicose dependence on foreign oil. It also gets left-leaning publications like the New York Times to give it some positive coverage for once.

And suddenly, Walmart has splintered its opposition. Since many tree huggers don’t have Al Gore’s wealth, they can (if no one is looking) shop at Walmart. You know, just for compact fluorescent lightbulbs. And maybe some 10% post-consumer recycled paper towels. And hey, socks, because one always needs socks. After all, unions have declined in America since the 1980’s, so Walmart isn’t going against the tide, and they’re making their suppliers meet stricter ethical standards, and, hey, times are tough! Have you seen the price of paper towels lately?!

But liberals and other Walmart bashers shouldn’t feel chagrined. Getting the world’s largest corporation to change its ways has never been easy. Not even Hillary could do it. But here Walmart might make a greater positive impact on consumption and production than all the laws of the past seven years put together.

So while Walmart advocates may scoff at Walmart critics, criticism works when combined with economic pressure. That’s critical. When waging a moral campaign, hit the target when it’s feeling vulnerable. Walmart felt that hit, and now it’s the empire’s turn to strike back.

Related Article: A Mismatch Made In Heaven: Apple Does Walmart