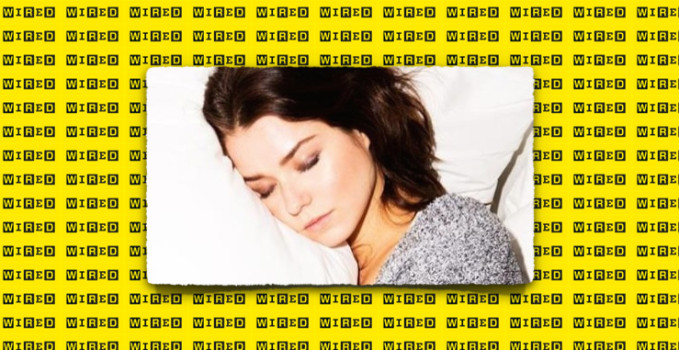 Branded DisContent: How NOT To Do Native Advertising

Back in the indie days of Wired magazine — when it was psychedelically colored, chopping-block thick, and as rebellious as James Dean on a Harley crying “MORE MORE MORE” — they wouldn’t have done this.

Yes, they ran ads — early Wired was capitalist to a fault, with a libertarian streak wider than Rand Paul’s ego. They started up to make money and they loved to feature others making money.

But they would never have been fake about it.

For all their Silicon-Valley-will-save-the-world bravado, early Wired critically analyzed everything. Sometimes they missed the mark, but at least they tried. That’s what made me a loyal subscriber. Any publication that questions the answers belongs on my reading list.

Above that, Wired writers magically turn dry topics like financial formulas into page-turning thrillers. I still read every issue almost cover-to-cover, and recommend Wired as a model of writing for 21st century readers.

So I was stunned, floored, flabbergasted, and cerebrally sucker-punched when I came across this recent post from Wired on Facebook. (Yes, I enjoy Wired so much I did the social media thing with them, and you all know how I feel about most social media marketing). 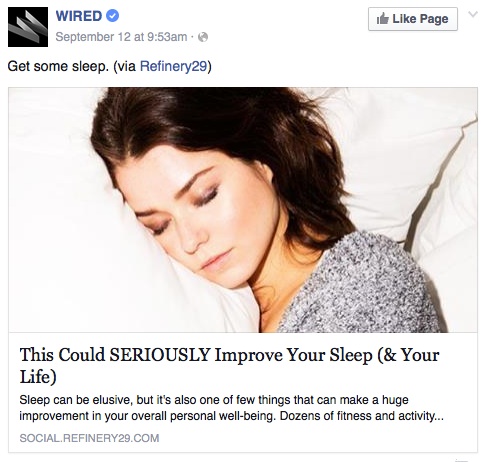 There on my wall popped this post from Wired — well, actually, make that a post from Refinery29 via Wired. And I immediately wondered, who the hell is Refinery29, and what did they do with the Wired editorial team? I looked up Refinery29 and found this spiel:

“Refinery29, the fastest growing independent fashion and style website in the United States, is a lifestyle platform that delivers nonstop inspiration to help women live a more stylish and creative life.”

I gasped. Are Wired editors being held hostage by a pack of venal fashionistas? Would we need to send in stylishly sassy search parties and couture-resistant Navy Seal squads?

Then I saw the post’s topic: SLEEP. Or more exactly, the lack thereof. And that’s something I could relate to. I sip coffee throughout the day, so my nights are more fitful than a chihuahua on a hot sidewalk.

The headline read, “This could SERIOUSLY Improve Your Sleep (& Your Life).” And any headline that puts SERIOUSLY in all capital letters has to be taken seriously, right? The ampersand misuse should have set me off — so un-Wired — but then I read the lead:

“Sleep can be elusive, but it’s also one of the few things that can make a huge improvement in your overall personal well-being. Dozens of fitness and activity…”

Dozens of fitness and activity what?! I had to know.

So I did the unusual on Facebook: I actually clicked on an article.

And that’s when it hit me in the face like a wet gym towel. This wasn’t another well-researched scientific discourse by Wired. Rather, I found myself face-to-face with a blatant marketing piece for some Samsung product called SleepSense. 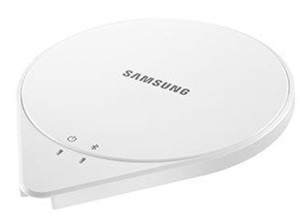 Some Nonsense About SleepSense

Now, I love gadget articles. I indulge in mega-materialistic Uncrate.com to peruse products I’ll never purchase. But this gadget feature was foisted upon me under false pretenses: I was expecting insight and advice, not an ad. I clicked it off.

Now why did this post irk me so? After all, I could see why Wired allowed marketing to infiltrate their content:

Well, kinda. The problem: this wasn’t a good native ad.

In case you haven’t heard, native ads are oh-so-trendy. We marketers also call them “branded content” or, in the print world, “advertorials.” John Oliver sums them up maliciously well:

Now, not all native advertising is as heinous as Oliver depicts. When done right, a native ad can provide value to the reader:

In all cases, we know it’s an ad because there’s some legally required disclaimer or — better yet — the brand and publication are open about it.

This Samsung SleepSense schlock isn’t anything like that. No general tips on how to get a good night’s sleep by, say, cutting out caffeine by 5pm, meditating about your navel, or watching baseball. This was all about the product, product, PRODUCT. We’re talking 100% full-frontal brochure-ware with no attempt at creativity. I’m guessing somewhere in the insulated bowels of Refinery29, some drone thought this constituted a clever way to move product.

Instead, they moved me… to leave.

I not only blocked Refinery29 articles on Facebook forever, I also (gasp) unliked Wired on Facebook. It was the most anti-Wired thing I’d ever done. Of course, I still get their print magazine and their email newsletter, which don’t carry Refinery29 nonsense… yet… so Wired didn’t entirely lose me. But given how hard it is to…

…then losing even one attentive fan on Facebook could count as a strikeout.

And I wasn’t the only one ticked off. Wired’s ham-fisted ruse alienated a few other Facebookers:

Robert Buck: “Dear wired, please stop with the mindless retweets (or whatever this is). I come to you for your unique content and this is diluting it. It REEKS of clickbait… You’re better than this.”

Eric Sterling: “It seems like it’s time to either fire the online editor… or the security team… or both.”

Eric Stargardt: “WTF is Refinery29? Stop putting bullshit on my Facebook feed, or I will make you stop. (unsubscribe)”

Note that it’s men who responded hostilely to this faux article. Given that at least 2/3 of all Wired readers are male, why did Wired partner on Facebook with female-focused Refinery29? All in all, this doesn’t seem like the smartest move from one of the world’s smartest publications.

Back in the early days of Wired, they published a regular feature called “Wired/Tired” that compared the trendy and passé. Native advertising is certainly the trend du jour in marketing. When done right, it’s nothing to lose sleep over (go away, Samsung). But enervating marketing like this just tires me out.