What Will You Start? West Virginia Is Wired In

Nice work, WVU! And I’m not just talking about your football team.

As a confessed footballoholic, I’ll watch pretty much any game that’s on. So right now I’m checking out the Meineke Car Care Bowl between West Virginia and North Carolina. Since televised football is essentially three hours of advertising interrupted by occasional plays, I usually work on my laptop at the same time. (Anyone know how to get nacho stains off a keyboard?)

Among the ads during this game are the obligatory college commercials. Most are usually little more than 30-second montages of clichés: look, there’s someone reading a book under a tree! Woohoo!

WVU also provides the customary montage, but at the end, the ad directs viewers to a website called “What Will You Start?” Hmm, a customized website as part of an integrated marketing campaign? I’m so there.

So I check out the site, and I have to give the WVU marketing team a high-five for understanding the difference between features and benefits. Instead of talking about the size of the school’s libraries or faculty-to-student ratio, the site showcases what WVU students have accomplished. (If visitors want school facts, the main WVU site is just a click away.) Most importantly, it talks directly to the prospective student and invites them to discuss their dreams:

Whether you want to start a record label, work with NASA, or improve the health of rural communities, West Virginia University will make it happen. Bring your hopes and dreams — we’ll help you start the journey.

Gotta say that’s pretty Gen Y savvy. While there’s nothing wrong with accounting, dentistry, or horticulture, the three examples WVU cited here — music, rocket science, and community service — would even intrigue people outside those fields. They’re linked to brief stories about particular students, which is a great way to personalize the school, as opposed to, say, describing the classes. 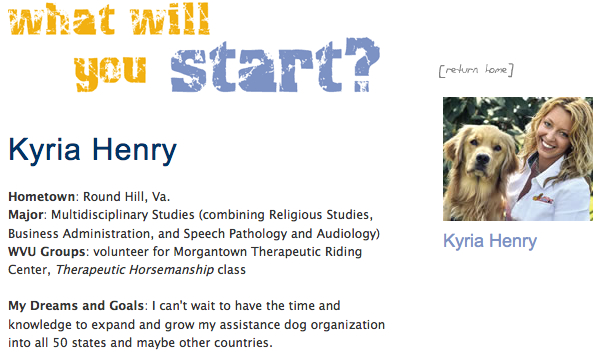 Finally, in the spirit of Web 2.0, the site invites users to submit their own stories.

On a more technical note, this site is refreshingly Flash-free, so all that text is search-engine friendly. There is one video — the TV commercial — but it’s actually the least interesting part of the site. And because this is a dedicated site, WVU can use its traffic to determine the effectiveness of the TV commercial. (Websites are easy to measure; TV commercials not so much.)

With young people now facing one of the worst job markets in decades — perhaps the worst ever, since there are very few corporate training programs left to absorb college grads automatically — a college site that’s focused on achieving career goals speaks to contemporary needs, anxieties and hopes. I particularly like the nod to entrepreneurship, since I believe that’s what will ultimately lift our economy out of its doldrums.