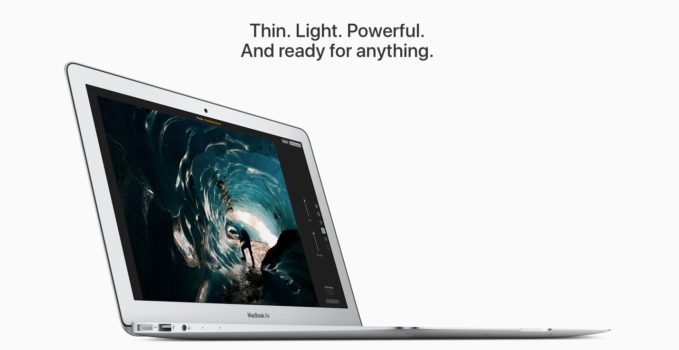 I didn’t need a new computer. My 2010 MacBook Pro is somehow still running — now 2 years longer than any previous computer I’ve owned over the past 30 years. (Knock on wood — just by typing this I might curse my Mac.)

Plus, my 2010 MacBook Pro includes features no longer available on a new Mac, such as a matte screen (glossy = annoying reflections) and a built-in DVD player (yes, some of us still use DVD’s to watch movies and access data).

But when I saw a Cyber Monday sale that included the 2017 MacBook Air, I snapped one up for several reasons:

1. It includes the invaluable MagSafe plug — one of Apple’s greatest unsung innovations.

Apple can keep their fancy touch bar (I’m still trying to figure out why I’d want one). I prefer a less sophisticated but more valuable feature: the power cord that safely pops off if someone trips on it. Apple claims the MagSafe is no longer necessary because users now run their Macs primarily on battery power. Not in my case. After a long day, my battery runs dry, yet I still need my computer to teach courses. The last thing I want is some klutz at school — mostly me — tripping over the cord and destroying my computer and my work. I make such a potentially fatal trip maybe once a year, but over seven years that’s seven computers I haven’t had to replace. So until Apple invents a shatterproof computer, I need the MagSafe. And just curious, but how much did Apple save on their expensive computers by getting rid of MagSafe? Or is this some underhanded means to get us to replace our Macs more often?

2. It includes the still popular and widely adopted USB 3.0 ports.

I refuse to replace all my computer accessories, or buy overpriced adapters, to accommodate Apple’s plug du jour. Over the years I’ve endured the obsolescence of SCSI and FireWire, and the absence of a VGA port (I have to use an overpriced adapter to connect with the video projectors on campus). I also put up with Apple’s refusal to use the popular Micro USB option. But I draw the line at upgrading to the Thunderbolt USB-C port. Sure, it’s faster, but that additional speed isn’t worth it to me at this point. Plus, given Apple’s obsession with changing ports on everything from their phones to their computers, I’m sure USB-C will be replaced by something else within a year or two.

(On the downside, the MacBook Air doesn’t have an Ethernet port — I had to buy an adaptor for that. Seriously, Apple, not everyone settles for WiFi.)

At nearly $1200 MSRP for the 256 GB version, the MacBook Air still delivers a shot to the wallet. But the new MacBook Pros get much more expensive than that fast. Given that computers need to be replaced frequently — usually more than once every 7 years — I’d rather just save up for the next one. Yes, the Pro is faster, but I mostly use my Mac to write and access the web. How much more speed do I need?

I’m now using my old Mac as the mother ship and the Air as my traveling computer. Someday, I’ll be down to just one computer, but not having to lug old faithful on the road may extend her life.

So here’s my recommendation for you: If you’re also a Mac addict, get a MacBook Air in prep for the day your current Mac calls it quits — unless you really need a touch bar (and please tell me why) and the speed of a Thunderbolt port (again, why?).

Eventually, Apple will win and force us all to upgrade. But I say let’s band together and make them earn it.