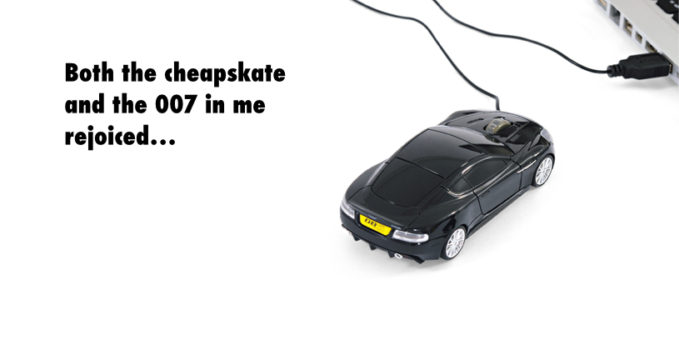 Of Mouse And Man: In Quest Of A Cheap Yet Compelling Computer Mouse

A certain trait of the adult male nerd species drives my wife crazy: our penchant for collecting toys to display around our work areas. My wife calls them “dust magnets.” Of course, we adult male nerds know what they truly are: visual caffeine to spruce up our man caves and help us survive desk life.

And just like coffee, an industry has sprung up to feed the need. To give you an idea of the size of this market, an entire website devoted to selling desk ornaments and other nerd toys, ThinkGeek, launched in 1999 and was acquired in 2015 for $140 million.

In my home office I have multiple toy cars, advertising trophies that look like hood ornaments, Pittsburgh Steelers mugs (not used for drinking), a USC license plate frame (not used for framing a license plate), a globe, a toy jet plane, a vintage typewriter, a wind-up robot, a wooden dog, and a miniature Hollywood spotlight. To name a few.

To this bad-ass menagerie I just added a mouse that looks like an Aston Martin.

No, not the rodentia mouse, but the computer accessory. It’s the third mouse I’ve had to buy in the past ten years. They all succumb to the same affliction: a dysfunctional scroll wheel. One day, I spin it and nothing happens. Damn moving parts.

(And please don’t tell me about track pads. When it comes to computer navigation, I still prefer mice. Call me an old school adult male nerd.)

Of course, I blame the wear and tear on trendy “infinite scrolling” websites — sites whose individual pages can be measured in parsecs if you print them out. Easier for smartphone users. Brutal on mouse scroll wheels.

The Great Mouse Hunt Is On

So when one of my mice died a few years ago, I thought I could get a better mouse at a higher price — “you get what you pay for,” right? No special features required: I’m not a gamer or designer, so I don’t need a mouse with seven buttons, hyper sensitivity measured in thousands of DPI, force feedback, or a built-in flame thrower. I also don’t want a wireless mouse — I’ve yet to operate my computer from across the room, and can’t fathom a battery-burning mouse that can die in mid-project. I just want a basic wired laser mouse that lasts. (Now there’s the kind of “disruptive innovation” I’d like to see: electronics that last for more than a few years.)

So for my first upgrade, I went for a $25 major-brand mouse, assuming it would last longer than a $10 mouse from some Chinese factory I never heard of.

The scroll wheel on that mouse wore out just as fast as the wheels do on cheaper mice. Odds are, the same Chinese factory I never heard of also made the mouse for the major brand. I just paid a premium for a logo. Ah, the power of branding!

So I’ve given up hope of ever finding a durable mouse. I’ve settled for ultra cheapo disposable mice with one caveat: they must have some aesthetic appeal. I want the objects I look at for hours every day to not bore me (see visual caffeine, above). One of the reasons I became a Steve Jobs fan is that he had the same priority. 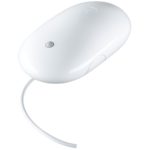 That said, I hate paying Apple’s brand tax for accessories.

The current price for Apple’s wired mouse (pictured left) is $49, putting it on the high end of basic mice. The 360-degree scroll ball and force-sensitive side buttons sound intriguing, but the average 2.5-star review (out of 5 stars) does not, particularly since many of the reviewers mention the scroll-ball malfunctioning. And while the Apple mouse looks sleek and minimalist, it’s still just a white plastic oval that lacks the ergonomic vertical curve to support the palm for long usage. And did I mention this thing costs almost fifty bucks?

So I kept looking.

Amazon’s basic mouse is, aptly, the AmazonBasics mouse (pictured right). Disposably priced ($6.99) and ergonomically designed, it’s still essentially a hunk of gray plastic. I would struggle to stay awake if I had to gaze at that thing.

Then I found it: a wired mouse that looks like an Aston Martin DBS for $4.99.

Both the cheapskate and the 007 in me rejoiced. The car’s shape is also naturally ergonomic. While there were no customer reviews on this particular mouse, other mice by the same company (Landmice) had decent scores, and for five bucks I was willing to take it for a spin. 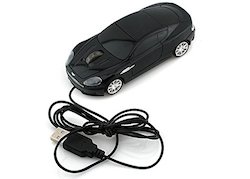 The Landmice Aston Martin DBS mouse (pictured left) looks better than photographed: more metallic, and my inner-child delights in the glowing headlamps and taillights. (Note: the lights can be manually turned off, but I don’t dare lest I break the cheap plastic switch.)

Downsides: the curve isn’t actually very ergonomic and the wheels don’t move (bummer). But otherwise it fulfills its mouse duties, and looking at it gives me the requisite visual stimulus to write a magnum opus or grade a dozen student papers in a single sitting.

Of course, I anticipate having technical issues with this mouse down the road (which would also match the Aston Martin brand). But until someone innovates a mouse that lasts — one based on a 1967 Ford Mustang, perhaps? — I’ll roll (baby, roll) with it.