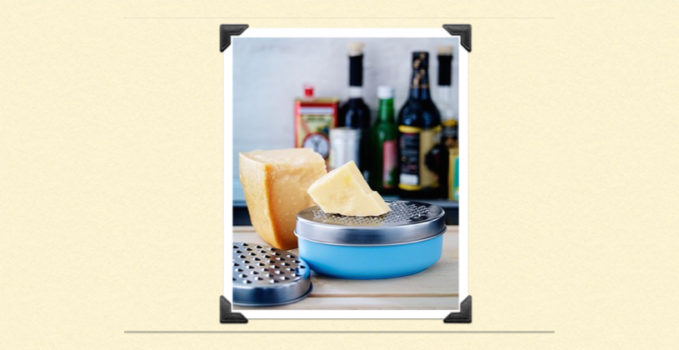 Raise your fork if you like your spaghetti to look like a blizzard hit it. OK, maybe that’s just me, but I think every entree tastes better with a snowcap of Parmesan cheese: salads, soups, savory sauces — if it calls for salt, I prefer the cheesy substitute.

But like many people, I was alarmed to read about the amount of wood pulp (cellulose) hiding in grated Parmesan. Granted, cellulose is a common ingredient that keeps cheese from clumping — and who wants clumped cheese? — while adding fiber to your diet. According to one cheese technologist (gotta love that job title!), an “acceptable” level of cellulose is 2-4%. But tests commissioned by Bloomberg magazine found levels as high as 8.8%:

Even more glaring, an FDA investigation found that now-bankrupt producer Castle Brands (once sold in Target and other stores) manufactured “grated Parmesan” that contained less than 40% actual “cheese product” — the rest consisted of various fillers, including wood pulp. As for that “cheese product,” it contained no actual Parmesan, but trimmings of leftover cheddar and other inexpensive cheeses. The Castle Brands President ultimately pled guilty and received 3 years probation, a $5000 fine, and 200 hours of community service. Compare that to the sentence that comedian Tommy Chong received in 2003 for simply making and selling bongs: 9 months in prison, a $20,000 fine, and forfeiture of $120,000 in assets

So I wouldn’t exactly call Castle’s “punishment” much of a deterrent.

As a result of all this exposure (thank the gods for the free press and government regulators!), I stopped buying grated Parmesan — not so much to avoid cellulose, but rather to avoid getting ripped off. As a cheese junkie, I want my supplies pure and uncut.

Sacrificing For The Grater Goods

Every grocery store sells blocks of pure Parmesan, and I’ve got two fully functional hands that spend most of their time tapping on a keyboard. Time to put them to real work.

Since I didn’t own a grater, at first I used a potato peeler. Slivers and slices of Parmesan taste amazing — better than any potato chips. But peeling cheese takes a LOT of time — something I truly value and don’t have much of. So I decided to invest a few precious hours into buying a cheese grater. Why hours instead of just logging onto Amazon and buying with a click? Because shopping for a cheese grater gave me an excuse to explore the capitalist equivalent of the great pyramids of Egypt:

And not just any IKEA, but the new 456,000-square-foot IKEA in Burbank, California — the largest IKEA in America. In case you’re wondering, that’s about the size of 8 football fields.

What’s more, to get the full experience, I went on a Sunday. And as anyone who lives in L.A. knows, unless you love mob scenes, you don’t even go grocery shopping on a Sunday.

Sure enough, the traffic just getting into the IKEA parking lot resembled a caravan of sports fans trying to enter a stadium. But no event waited at the other end of this car crawl — just shopping, America’s favorite pastime. Fortunately, IKEA had hired some Burbank police and a small legion of traffic directors (yay, American jobs), so I soon claimed one of the 1,700 parking spaces. I then joined the throngs migrating into the cavernous Vault O’ Cheap Furnishings, with its 600-seat restaurant and more than 50 “room settings” (picture museum displays of new things you should BUY NOW!). Of course, there were lines for everything — from Swedish meatballs to the restrooms — but it all flowed remarkably smoothly.

I finally came across the cheese graters, and as this IKEA promises, there were CHOICES:

Being no judge of grate-ness, I chose the Chosigt (see the photo by IKEA at the top of this article). I like the integrated container and the overall appearance, though it could use a higher quality plastic or even glass.

By the way, the IKEA website now identifies the product designers, and I’m obviously all for giving creative professionals credit. So here’s a high-five to Chosigt designer Sue Pryke, a graduate of the Royal College of Art and an IKEA Design Consultant for 22 years. She also has her own design studio in England and a retail store online.

Of course, having made the trek and survived the crowds, I also wound up buying a few other items with Swedish names that sprained my tongue. Time to test my purchase and appease my palate…

On To The Cheese!

As mentioned, nearly every grocery store sells wedges of hard Parmesan. I’m a devout Trader Joe’s cultist, and they also offer choices. (Gotta love American retail.) The store brand Trader Giotto’s Parmesan Cheese is $6.49/pound and tastes perfectly fine to me, but it’s made from Wisconsin milk, and Italian cheese makers hate non-Italian producers appropriating Italian regional names. “Parmesan” refers to Parmigiano-Reggiano — cheese from Parma, Italy and neighboring regions. That’s why the European Commission bans the use of “Parmesan” and “Parmigiano-Reggiano” for cheeses made in other areas.

Of course, American companies do whatever they want.

In support of artisans and their brands, I upgraded to Parmesan Grana Padano from Italy (like Parmigiano-Reggiano, but made differently). Pricier at $10.99/pound, it has a more crumbly texture (the Trader Giotto’s is more rubbery) and is also a bit saltier.

Either option is far better than the mass-processed grated stuff. With my novice grating skills, filling the Chosigt container with 100% real Parmesan took about 5 minutes — time well spent. Note: grating is far messier than peeling, so I do it atop a chopping board to save the stray pieces (no cheese goes to waste around here).

And if I ever miss the wood pulp, I figure I can always copy my cats and gnaw on a houseplant.