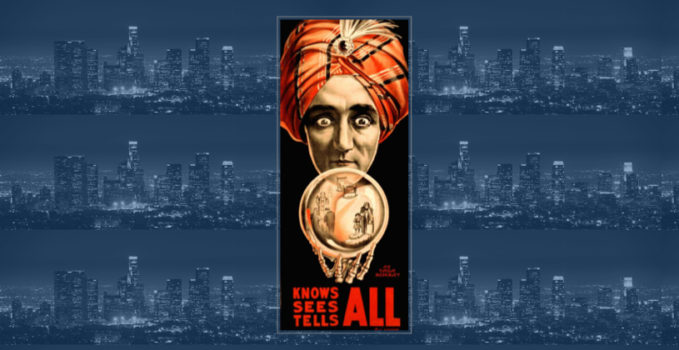 Look Out Ahead! 2017 Predictions for Marketing, Media, and Mischief

Based on my observations of trends in demographics, business, technology, and politics, I’ve concocted and contrived these predictions for the new year and beyond. Maybe way way WAY beyond. But if 2017 is anywhere near as capricious as 2016, these could all happen. Or the zombie apocalypse will finally arrive. In any case, here are my forecasts in no particular disorder…

SIRI-OUSLY NOW: Touch screens are so two years ago. Instead, animated chatbots will take over brick-and-mortar retail to become virtual bank tellers, receptionists, fast-food clerks, and ticket sellers. These chatbots will speak multiple languages, and some will recognize the faces of frequent customers and instantly pull up their purchasing preferences. Note that there’s no guarantee that the brave new world of animated chatbots will be as amazing or sad as the one depicted in this video:

OOH, SHINY: Executives will continue to clamor for “MEASURABLE RETURNS!!!” on all their marketing… then turn around and throw money at VR, AR, live streaming, holograms, and any other shiny new toys they can brag about. (See animated chatbots above.) After all, a nicely balanced spreadsheet rarely gets you invited to speak at SXSW or featured in Advertising Age.

THE EMPIRE STRIKES BACK: Once seemingly vanquished by their nemesis Apple, Microsoft will become synonymous with business again, as they turn LinkedIn into a corporate hub that integrates Office (making it easier to share spreadsheets, presentations, and documents), Outlook, and Teams (their competitor to the business-messaging tool Slack). LinkedIn will also be integrated into future versions of Windows, and made touch-screen friendly — make that, chatbot friendly — on Surface Pros.

TWEETING IS FLEETING: Most non-celebrity Twitter users will finally wake up to the fact that almost no one is paying any attention to their tweets. They’d get more awareness by scrawling on a bathroom wall. To keep the masses on board and avoid following Friendster and MySpace into Web 2.Oblivion, Twitter will increasingly turn to streaming content (sports, other live events, and movies).

#MOVIES: Some theaters will surrender to the scourge of texting during movies, and introduce 100% social screenings, with dedicated tweet streams appearing below the movie screen (“use this hashtag…”). Particularly popular will be football games on the big screen (“Steelers vs Cowboys in Cinema 3”), with theaters able to fill those usually dormant weekend morning and Monday night slots, and the sports leagues able to reach more cable cord cutters.

GAMING U: Video games are being blamed for men dropping out of school and the workforce. At the same time, public education funding is increasingly at risk. Enterprising developers will create more games that fuse education and entertainment — and likely an ulterior motive. For example, as the Texas State Board of “Education” increasingly lobotomizes their curriculum, a gaming company could introduce a historically accurate remembrance of the Alamo, with the Mexican Army fending off the foreign invaders. For science buffs, teams could compete to evolve species that best fit a planet drastically altered by global warming.

TURN TO PAGE 103 IN YOUR TEXTBOOK AND READ JUST ABOVE THE ABSOLUT AD: Those who do go to college will find ads in their textbooks to bring down their exorbitant prices. The first advertisers will be other college programs and associated partners (university credit unions, sports programs, student book stores, tutoring and test-prep services). Major “education-friendly” corporations will follow (see Microsoft above). This raises the spectre of advertising in college classrooms to bring down tuition. After all, if there can be giant billboards in sports arenas, why not in large lecture halls? (“The following class is brought to you by Red Bull and the U.S. Navy…”).

SURPASS OR FAIL: Speaking of the education market, small colleges are in trouble as the pool of potential students continues to shrink (smaller middle class, fewer men, and likely fewer foreigners). In particular, remote liberal arts colleges without marquee sports programs will need to boost their brands and justify their costs (“you want me to borrow $70,000 a year to study where?”). Relying on clichéd photos of students reading books under trees will no longer suffice.

REDEFINING “PUBLIC”: Facing the prospect of losing all government funding, formerly “public” broadcasters will feature more corporate “underwriting” (aka boring commercials). Some smaller stations will merge. Others with university ties will be more closely integrated into the school programs.

NEWS GOES NONPROFIT: Under assault by the Trump administration, and facing the inevitable demise of their print publications, some newspapers decide to turn to donations and foundations to stay afloat. This requires removing political editorials. (As if our highly opinionated world would miss them.) Given their new nonprofit status, some newspapers may merge with public broadcasters or become part of large private universities. The USC/NPR L.A. Times anyone?

MAGAZINES BECOME HIP(STER): While more print publications will implode and disappear, some magazines will actually take off as hipsters continue their analog renaissance (vinyl albums, board games, instant print photos). These “artisan” magazines will feature luxurious HD photography and longer stories, which people prefer to read offline. (Mobile content will reign supreme for news bites.) Advertisers will flock to these new zines, not only because they target millennials, but because consumers still trust print ads more than any other medium (see chart below). In addition, publishers can include product samples with each issue — think merger of subscription boxes and content. Hmmm, I wonder what an Atomic Tango zine-box would hold. 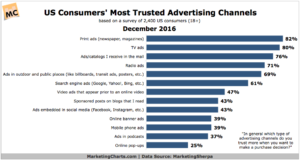 GEN-WHATEVER: All those articles about millennials from the past ten years will be recycled, with editing programs automatically replacing “Gen Y” with “Gen Z.” Some marketers will eventually catch on that today’s young people are really not that different from young people of previous generations; they just have better technology. At the same time, Gen X will continue to be ignored despite accumulating most of the nation’s wealth as well as most of the executive positions that Boomers will finally vacate. (Typically self-deprecating, Gen X will also ignore itself.) Speaking of generations, children born next year in Japan and other advanced countries, where the average life expectancy is 83, will live to see the year 2100. (Note: America’s average life expectancy is 79.1 — just behind Chile and Costa Rica — so we’ll have to wait a few years before spawning our own 22nd century inhabitants.)

THE 1% GETS UNDIVIDED ATTENTION: As wealth continues to trickle up, and the middle class hollows out, more companies will follow Starbucks’ lead and focus on creating even higher priced, ultra premium options. The appeal: establishments where the super wealthy can network with each other… and not have to mingle with the riff raff. Think all-first-class airlines, extreme customization (you, too, can have a Mercedes named after you…), and $1000/day amusement parks (no lines, gourmet food carts, real celebrities not mascots).

EXTRAORDINARY EXURBS: As major cities surge out of financial reach of artists, they will migrate en masse to creative exurbs: hubs of writers, musicians, painters, and other non-commercial creative types. Think places like the Antelope Valley near L.A.; Marfa, Texas; or rural college towns like Corvallis, Oregon (just an hour from Portland). This means the demographic swap will be complete: wealthy people will take over the once derelict city centers, while the less well-off move further and further away. Of course, once all those creative people make the exurbs seem desirable again…

REMEMBER READING? What you’re doing right now — looking at shapes on a screen and deriving information from it — will become an even rarer activity, the hipster magazine renaissance notwithstanding. Instead, people will have their chatbots read to them: articles, novels, textbooks. On the plus side, this frees up multitasking — enabling laundry and cooking to be performed with a literary backbeat. Future generations will view the written word like archaeologists view hieroglyphics. That is, until 22nd Century hipsters make reading cool again. But that’s a subject for another set of predictions.

Until then, here’s wishing you and yours a trippy and mischievous new year!