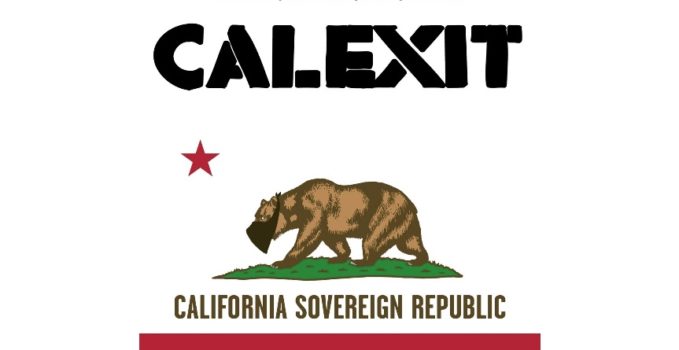 Resist! One Page At A Time: The CALEXIT Comic Book

by Freddy Tran Nager, Founder of Atomic Tango + American Happy To Be In Cali…

Sometimes creative expression hits too close to home — and a nerve.

That’s definitely the case with CALEXIT, a comic book series depicting a hypothetical California secession from these not-so-United States. The secession is precipitated, of course, by the election of a certain orange fascist… 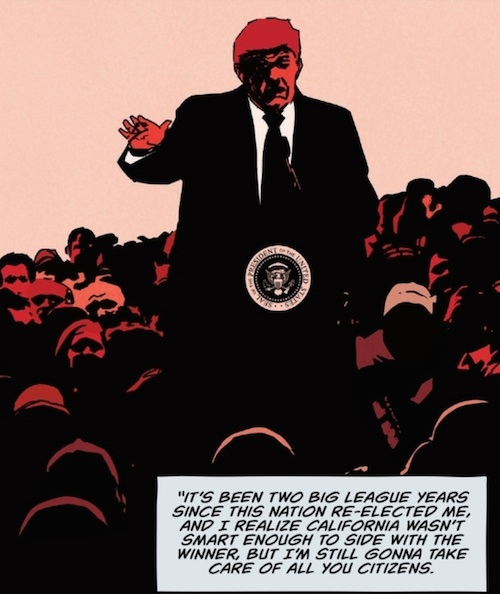 Guess who? (panel from the comic book CALEXIT #1)

Written by Matteo Pizzolo and illustrated by Amancay Nahuelpan, the comic book comes from indie publisher Black Mask Studios, which is “bringing the punk rock ethic to comics.” CALEXIT’s pages express this punk attitude with somewhat raw drawings, extreme violence, gratuitous nudity, and a full-on rebellion by young people in (what else?) Antifa-style black masks. As the Black Mask site describes it, “resisting oppression, punching Nazis, protecting each other, kicking ass, and demanding liberty for all.”

(By the way, given the incendiary subject, it’s only appropriate that I read this comic book using a Kindle app. CALEXIT is the first comic book I’ve read using Kindle for the iPad, and I enjoyed the somewhat cinematic experience, with automated zooming and panning with each click.)

Now while the comic book is pure dystopian fantasy — I did find the over-the-top violence stretching credulity, with a villainous bureaucrat knifing innocent people in their homes, and Homeland Security thugs flame-throwing entire neighborhoods — Pizzolo’s own thoughts seem rational.

In a well-written editorial in the back of the comic book, he acknowledges that “any secession would likely lead to a civil war within California before the US military could even get their boots on,” noting that the state is politically diverse, depending on whose territory you happen to drive through.

Point made, he then lists several noteworthy events after he started developing CALEXIT in 2016, from Trump’s huuuuge election loss in the Golden State, to an actual CALEXIT movement (“a Russian scam,” Pizzolo notes), to California thumbing its nose at Trump by discussing climate change directly with China. These events galvanized Pizzolo’s crew to not only create the comic series, but also to keep it “recontextualized in real time.”

To provide that context, Pizzolo has interviewed such noted activists as Lexi Alexander, Bill Ayers, and Amanda Weaver, with excerpts printed in the back of the book and full interviews on the CALEXIT Comic website. I found those interviews intriguing and inspiring. I wish I could say the same about the ultra-violent story.

Obviously, going topical and fantasizing about violent revolution in contentious times will generate controversy and notoriety — NPR garnered backlash from Trumpists just for tweeting the Declaration of Independence on the 4th of July. So CALEXIT is also scoring press coverage that most indie comics could only dream of, as well as hateful comments on its page at Amazon. And to that I say, go Black Mask Studios!

That said, even though I’m a hardcore Blue Stater living in one the most liberal parts of California, and even though I cringe at every policy and tweet spewed out by the Trump regime, and even though I celebrate every bit of resistance by California’s politicians against Trump, I didn’t find myself elated or encouraged by CALEXIT’s first issue (no binge-reading here — subsequent issues are yet to come). I found myself depressed. 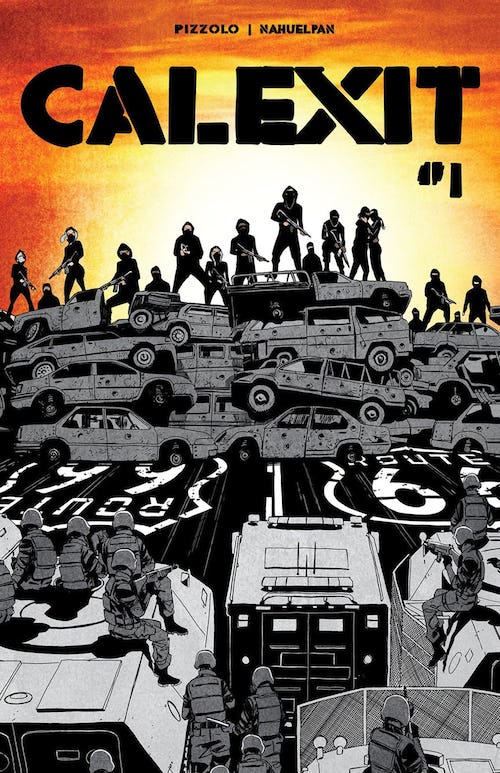