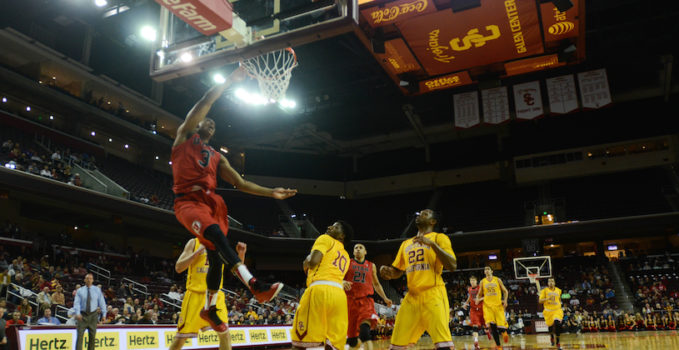 The other night I thought I went to a college basketball game at USC, but I had apparently wandered into a circus…

Yes, on occasion, ten extremely tall young men sprinted back and forth across the floor, flaunting feats of athleticism I could only dream of doing.

But apparently, that wasn’t enough.

First, a portion of the night honored Kobe Bryant, although he didn’t attend either of the colleges playing. Indeed, he didn’t attend college at all. But OK, this being Los Angeles, memorializing him with free commemorative T-shirts and 24.8 seconds of silence seemed appropriate.

Yet even that wasn’t enough.

Whoever runs these events must live in quaking fear of mass Attention Deficit Disorder, since they provided no time to actually savor anything. In between the spurts of on-court action, the event organizers gave us replays of game highlights, flashing ads for sponsors, two basketball shooting challenges involving fans, T-shirt tosses, a kiss cam, a loudest-fan contest, and videos promoting the next game AND the next game’s halftime attraction (appropriately, Cirque du Soleil).

Did I mention I had gone to watch basketball?

While I appreciated the organizers wanting to give me my money’s worth — the tickets were not cheap ($40 each for a regular season game played by “amateurs”) — I would have taken two bottles of water in exchange for the DJ. In fact, forget the water — I would have paid extra to do without the DJ.

Early in the evening, I told my friend (a former student in his thirties) that I already had auditory fatigue. He said he felt that, too, but mentioned that maybe we’re just old. I agreed. I would have absolutely loved all this when I was five.

Despite all the distractions, I ultimately enjoyed the game — it helped that USC won — but from now on I’ll opt for entertainment that’s less assaulting on the senses. Like, say, running with bulls while wearing a red cape.