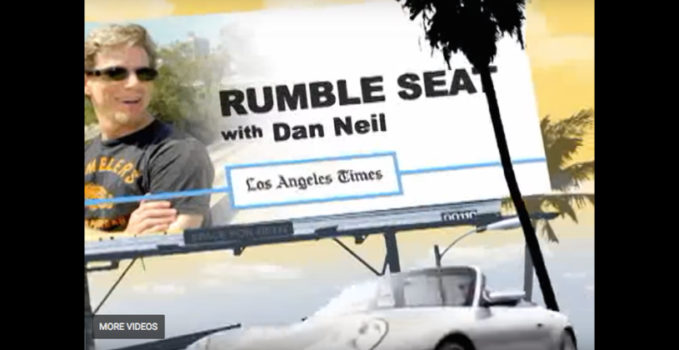 If you lust after cars like I do, then the writer you need to read — yes, NEED — is Dan Neil of the L.A. Times. Even if you don’t care about cars, you’ll love his column, “Rumble Seat.” Just check out the opening salvo from his review of the Nissan GT-R:

I know what you want from me. You think I’m just your little word slut, that I’m here just to arouse you with steamy descriptions of the new and instantly legendary Nissan GT-R. You want me to parade around in frilly verbiage, like: “The acceleration of the twin-turbo, all-wheel-drive, 480-hp GT-R is much like a 50-yard field goal in the NFL, wherein your butt is the football.” Sigh. I feel so used.

Now, if you’re more of the century 21.0 “printed words scare me” generation, you can access the video option:

But the place to savor Neil at his red-line, high-octane best is print. After all, how many other car critics have a master’s degree in English lit and, more significantly, a Pulitzer Prize?

Now I bring up Neil years after he was discovered because the boneheads at NBC (a.k.a. the No Balls Channel) excited American auto-aficionados by announcing an American version of the hit BBC car series Top Gear. Then NBC decided to follow the American tradition of taking a killer British idea and watering it the hell down. (See The Office or Coupling or Max Headroom.) According to Autoblog, “indications are that the scathing rhetoric that makes the BBC show such a hit will be severely curtailed by NBC, who fear a backlash from sponsors.”

And TV execs wonder why viewers are abandoning the networks for YouTube and Netflix.

Dan Neil was originally supposed to be part of the series, but was booted ostensibly for “lack of on-air personality.” Instead, NBC is giving us that paragon of taste and acumen, Adam “The Man Show” Carolla.

I’ll stick to reading “Rumble Seat.” Rev it up, Dan…

Update 3/3/2009: Some very cool news: Dan Neil will start writing a column on marketing and advertising for the L.A. Times. His first is a funny rant on the new Pepsi logo.