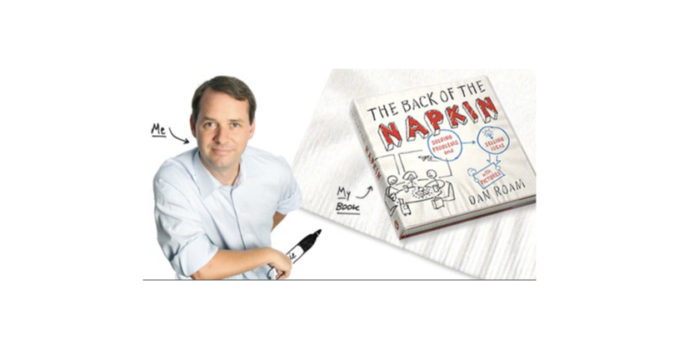 Drawing Conclusions: Dan Roam Presents “The Back of the Napkin”

by Freddy Tran Nager, Founder of Atomic Tango; an earlier version of this story appeared on Jawbone.TV…

For author Dan Roam, it began with a living nightmare.

As he writes in his book, The Back of the Napkin, a colleague in his consulting firm had a medical emergency, so he asked Roam to cover for a speech the next day. Roam agreed “only to learn later that the speech was to take place in Sheffield, England (we were in New York) to an audience of educational experts appointed by the then-new British prime minister, Tony Blair. My colleague hadn’t told me what the topic was — something about the Internet — or where his materials (if there were any) were buried.”

Roam grabbed the next available flight to England, and the next morning, he found himself heading to the presentation on a train with his British colleagues. What Roam didn’t mention in his book — and which he revealed to me later — is that he was also intensely hungover, jetlagged, and living on two hours of sleep, thanks to the welcome party thrown for him the night before. The alarm clock had sounded at 6:30 am (“that is hell”), and not only was there no semblance of a presentation ready to show, Roam was in no condition to even wing it.

Not only did this feast of fats and carbs “soak up the poisons,” it also literally provided food for thought. With his colleagues watching apprehensively, Roam started sketching his ideas on the back of a napkin. Roam has a degree in painting, but his sketches were nothing that any child couldn’t master: basic shapes, lines, arrows, smiley faces, and stick figures. They worked perfectly. The simple act of drawing helped clarify an idea that had been dancing in Roam’s mind, and the simple drawings quickly executed enabled his colleagues to comment and provide their own ideas.

The result: a presentation that far surpassed expectations. Simple drawings helped explain the Internet to some technologically challenged bureaucrats, and the firm landed the account. To this day, Roam is a strong believer in visual thinking — and mixing food and business. Hence, the napkins.

From England to Fox News to The White House

Roam’s ideas on visual thinking and presentations were published in The Back of the Napkin. While the book has sold extremely well, appearing in dozens of languages around the world, Roam’s big leap into the spotlight came when he tried to figure out America’s health care situation for himself. Sketching the problems helped to simplify the issues, and his 4-part series entitled “American health care on (4) napkins” caught the attention of the Huffington Post and Fox Business. Although Roam’s political views “rarely align with those of the pundits appearing on Fox,” he was invited to appear on the Fox Business Happy Hour show, “The Diamond District.” Appropriately, the show took place in the bar of New York’s Waldorf Astoria, where there are plenty of cocktail napkins. (For the camera, however, Roam used oversized note cards.)

As a result of this exposure — and the fact that he generally supports President Obama’s health care reforms — Roam presented his visual thinking tactics to the administration’s communications team.

Roam believes that most politicians avoid drawing on whiteboards because they don’t want to appear patronizing, yet the last political figure who relied on visual thinking, Ross Perot, is still respected for his charts — although everything else he did said “wacko.”

“A leader is expected to have a vision,” notes Roam. “It’s meant to be big, like going to the moon.” And the best way to present that vision, of course, is through pictures.

A Matter of Survival

Long before the England trip, when Roam was just 17, he traveled from his native Montana to Bangkok, Thailand in an exchange program. He didn’t speak Thai and his host family didn’t speak English, so Roam relied on miming to convey his thoughts and needs — but drawing proved to be most effective in bypassing barriers of language and culture.

Years later, as a professional communications consultant, Roam started his own marketing firm in Russia, even though he didn’t speak Russian. “I drew pictures. And helped my Russian team draw theirs. It worked. After a few years I spoke Russian well, but we still drew pictures, because they still worked.”

Roam has several theories as to why a visual approach to problem solving is so effective. In basic biological terms, about 75% of the neurons in the brain are devoted to visual processing, “so why not communicate in a way that uses all of it?” On a more social level, Roam notes that “people like seeing other people’s pictures.” The step-by-step process of creating the pictures also facilitates understanding, more so than completed imagery does. 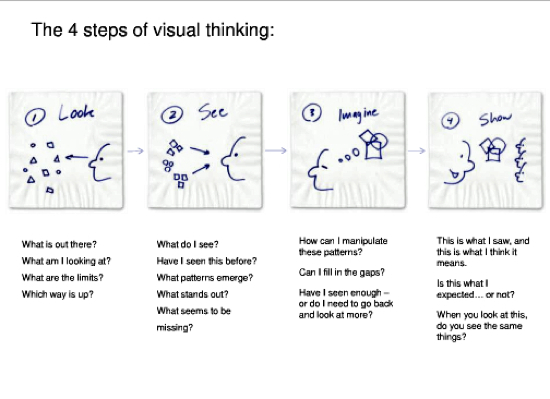 Roam concedes that professional documents sometimes require computer-generated images, so his book contains advice on software for creating various diagrams and charts, but he also argues that “computers make it too easy to draw the wrong thing.” People get bogged down in the details and the precision. The advantage of the simple hand-sketched images is that they are “quick to create and easy to change.”

In addition to professional issues, Roam advocates using drawing to resolve personal problems. “They’re a good way to figure out what you want to do in life.” He notes that, in personal planning, most people start writing lists of things to do, but lists of activities present “just a sliver” of what’s important. Roam recommends first drawing the people in one’s life, without worrying about the quality of the pictures. Stick figures will more than suffice. “When I do this, I begin to realize, for example, what makes my wife my wife.” The drawings help impart value to all the elements that come to mind.

Roam’s living room today contains large whiteboards that he uses to solve personal problems and help his children with their homework. One daughter, a screenwriter, also uses the boards to help her map out her stories.

I asked Roam for professional tips, including such trivia as which napkins and pens make the best tools. With tongue firmly planted in cheek, he endorsed Vanity Fair Everyday Napkins found in most supermarkets. “But don’t get the Premium napkins. They’re too intimidating and will constrict your creative juices.” In terms of pens, Roam prefers a Japanese import: a Pilot Dr. Grip with gel-based ink. “Everyone expects me to say use a Sharpie, but they make a mess,” he jokes.

Tools aside, Roam encourages artists to use drawing not just in their artwork, but in planning their careers. “In order to paint, you have to eat. You have to sell, you have to manage your career.” He recommends that artists storyboard their lives as if they were storyboarding a film.

Finally, hearkening back to his English adventure, Roam again recommends food as an essential accessory to alleviate boredom and nervousness, whether in a conference room or at home. Although he no longer drinks much himself, he also recommends “drinking and drawing.” (Just for the cocktail napkins, of course.) Only one caveat: “Draw while you’re drunk, erase when you’re sober.” 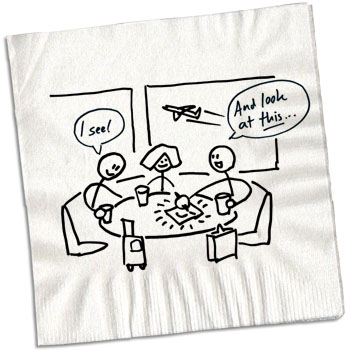