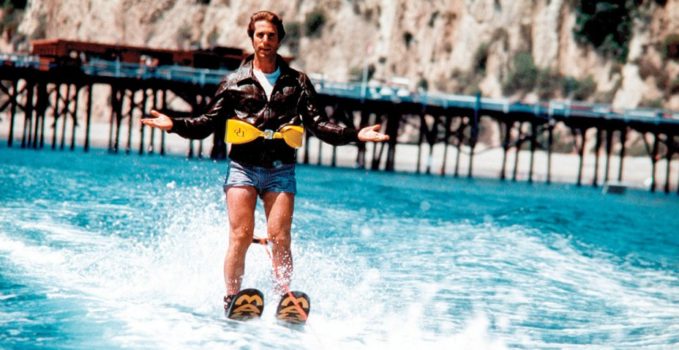 Soccer Moms Voted Off The Island For Jumping The Shark: 10 Odd American Expressions You Should Know

Although Americans don’t manufacture much anymore, we still excel at making media, including entertainment and news. We give good hype, and the Internet brings it to the rest of the world 24/7.

One problem: all this unfiltered Yankee content poses a linguistic challenge for people in other countries, even those fluent in English. That’s because Americans also excel at screwing with the language — and I’m not just talking about Miss South Carolina (warning: excruciating cringe-inducing video ahead)…

This occurred to me during the 2008 Presidential election, when popular expressions like “Joe Six Pack,” “Drinking The Kool-Aid,” and “Voted Off The Island” likely beguiled people who weren’t raised in America, who didn’t keep pace with our popular culture, or who were politicians over the age of 70.

So as yet another friendly public service, I compiled 10 expressions you should know. (Note: I’m not attempting to chronicle all slang in existence — that’s what Urban Dictionary is for. I just selected odd terms that have become so commonplace that they appear in newscasts.)

Joe Six Pack: In America, beer often comes in bundles of six cans. It’s usually the cheapest of beers, and it’s easy to carry one bundle in each hand. Working class American males — many of whom are named Joe — do not quench their thirst with elitist glasses of wine, but with a couple of six packs from a convenience store. Side note: someone with well-defined abdominal muscles is said to have “six pack abs” because of the way they appear, but most Joe Six Packs have bellies resembling kegs from all that drinking.

Switftboat: In the 2004 U.S. Presidential election, some military veterans who served with Senator John Kerry on Vietnam swiftboats slandered his record. Kerry failed to defend himself, and his subsequent loss is widely attributed to this “swiftboating.” Today it refers to any organized attack on someone’s character or reputation.

-Gate: Since Richard Nixon’s Watergate scandal of 1972, many scandals have been nicknamed using a word combined with “-gate” such as Troopergate and Plamegate. There’s no logic to this, since “Watergate” was just the name of the office complex that Nixon’s men broke into. But logic is not part of American language — or American politics.

Drinking The Kool-Aid: In 1978, cult leader Jim Jones persuaded 907 members of his Peoples Temple in Jonestown, Guyana to commit suicide by drinking Kool-Aid (a sweetened beverage) laced with cyanide. Kool-Aid brand managers aren’t happy with this association, especially since there’s no proof that the sweetened punch was actually Kool-Aid. (Pop culture can be brutally unfair.) Today, “Drinking the Kool-Aid” refers to believing anything anyone tells you without questioning its truthfulness. It’s often associated with fans of Fox News.

Hail Mary: In American football a “Hail Mail” is a play of desperation, in which a quarterback throws the ball as far as he can in slim hopes that a teammate will catch it and score a touchdown. This risky play has little chance of success, so it’s associated with the prayer of the same name.  The term now applies to any desperate move by a losing team, particularly in politics.

It’s Not Over ‘Til The Fat Lady Sings: This old phrase refers to operas that end with a heavyset woman singing. Sportscasters say “it’s not over ’til the fat lady sings” to encourage viewers to keep watching the game in case the losing team stages a comeback (perhaps with a Hail Mary). Considering that most Americans today have never seen an opera, and would have to be forced at gunpoint to attend one, this particular expression will likely soon hear fat ladies singing its own death knell.

15 Minutes of Fame: In 1968, American artist Andy Warhol said, “In the future, everyone will be world-famous for 15 minutes.” He was close: with YouTube, everyone is famous for approximately 3-5 minutes. (See Miss South Carolina…)

Voted Off The Island: On the TV show “Survivor”, contestants live and compete on a deserted island. At the end of every episode, one contestant gets voted out by the others and sent home a loser. Oddly, this is highly entertaining. Hence, “voted off the island” means getting kicked out of a group or company.

Jump The Shark: This expression also has roots in television. “Jump The Shark” refers to a laughably bad episode of the once-hit TV series “Happy Days” in which a supposedly “cool” character decides to water-ski over live sharks (the featured photo in this article). Since this show originally featured ordinary people in the 1950s, the absurd plot signaled that the writers had run out of ideas. Now, whenever anyone’s career declines, people speculate on the exact moment — usually the most embarrassing one — where they “jumped the shark” with a bad product or embarrassing act. This phrase is also applied to Presidential candidates, but fortunately, not to marketing bloggers… yet.