Get Surreal: If “Inception” Were Really A Dream… 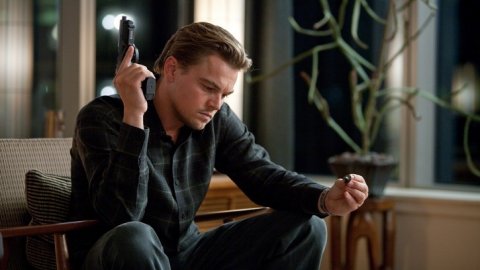 "My dead wife is haunting me, evil thugs are chasing me, and I have a final exam tomorrow for a math class I forgot to attend..."

So “Inception” is this action-packed, visually stunning film that appears real. Too real. Indeed, although the premise is based on dreams, it isn’t very… well, dreamlike. Who has linear dreams that are essentially action films? Whose dreams appear shot from a third-person perspective with scenes that don’t involve them?

Dreams are usually visualized from a first-person P.O.V., with the person dreaming involved in all the action. But forget the technical side — I don’t have to tell you that most dreams are bizarre, as if you’ve been doing mushrooms with David Lynch and Bugs Bunny while going backwards on a Disneyland ride during an electrical storm. Plus, they often contain a few good dream clichés. For example, if “Inception” were truly dreamlike, it would contain the following…

1. Leonardo DiCaprio finds himself in public wearing only pajamas, his underwear, or nothing at all, and tries to be cool about it around other people.

2. As bad guys chase him, he finds himself suddenly trapped in slow motion. He tries to scream for help, but no words come out of his mouth.

3. Speaking of mouth, his teeth feel loose in their sockets, and some fall out.

4. He finally manages to talk to his wife, but she changes before his eyes. She becomes Ellen Page and then his mother who in turn becomes his junior high school crush and then some woman from an insurance commercial before becoming his wife again.

5. In mid-conversation, he suddenly realizes that he had signed up for a math class at school, but had failed to attend class all semester long, and the final exam is tomorrow. And where the hell is the classroom?

6. He finds the class, but it becomes a theatrical stage from when he was a younger actor. The play is about to begin, and he realizes he doesn’t know any of his lines and will have to improvise the whole thing.

7. A cat feeds him his lines and becomes a wild beast that starts to stalk him. He runs into his childhood home and slams the door. He thinks he’s safe, then turns around and realizes he left the back door wide open.

8. Freaked out, he hops in his car, but can’t control it. He crashes into things and at one point finds himself hanging out the window, barely holding onto the steering wheel.

9. The car flies off a cliff and he loses his grip on it, but he can suddenly fly over the trees — as long as he concentrates on it. His concentration slips and he starts to fall back to earth.

10. Before he can hit bottom, he wakes to find that he is actually Joseph Gordon-Levitt busting moves to “You Make My Dreams” in a dance sequence in the middle of L.A.

Now THAT is a dream movie. And it’s easy to see: two burritos, some melatonin and I’m there. Who needs Hollywood?